The Harvard snowflakes of 1975: What today's campus scolds get wrong about college students 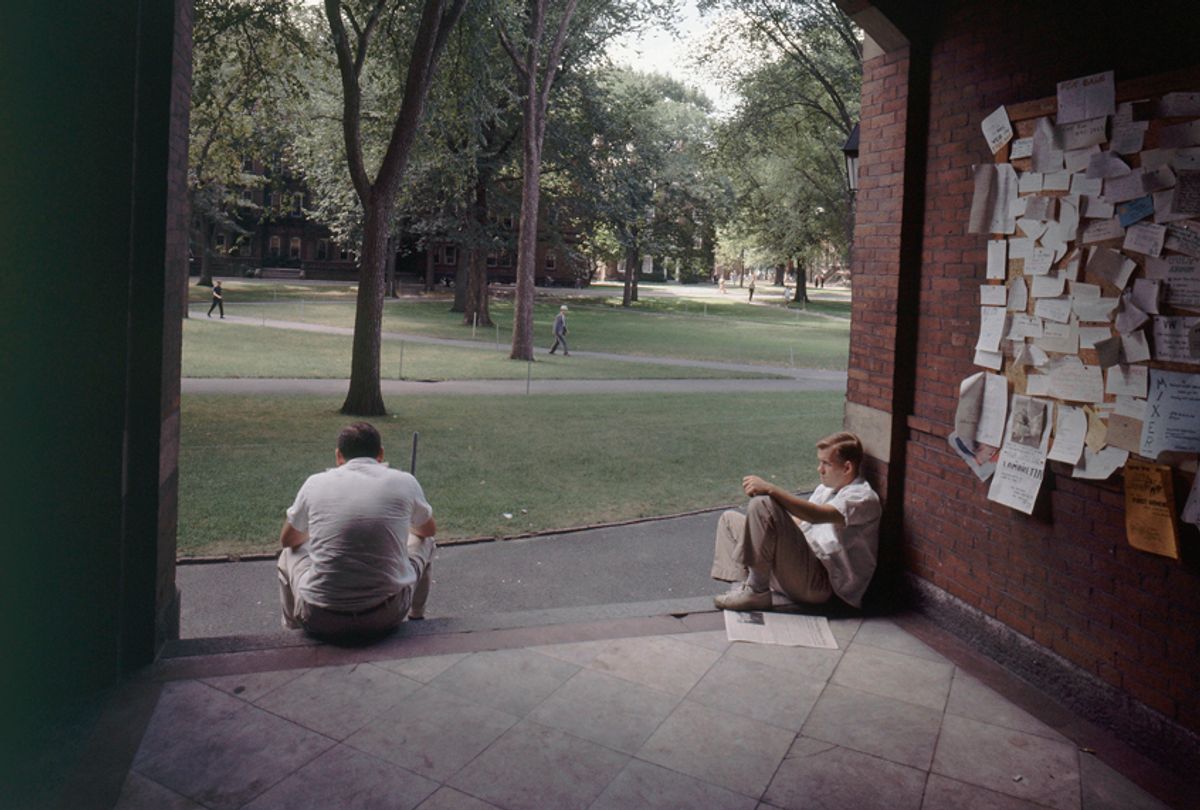 Wondering last week why the last few years’ public hoopla over college "snowflakes" and "cry-bullies" has abated, I tried what the writer Walter Benjamin called literary pearl diving: I plunged into submerged origins of today’s public sentiment and found an early instance of opinion-formation about stressed-out college kids that crystallized in obscurity with the passage of time. When a buried artifact of opinion-formation is retrieved from layers of sediment, brought to the surface and turned over in the light, it can illuminate forgotten truths about ourselves and deepen – or disrupt — our sense of who we are and what we can do.

What I found last week was a fragment from the ancient year of 1975 – merely a column in a college student newspaper – that offers a long-forgotten (and therefore now fresh) perspective on recent, widely read pronouncements about what ails college students, such as William Deresiewicz’s 2014 book, “Excellent Sheep: The Miseducation of the American Elite and the Way to a Meaningful Life” and Greg Lukianoff’s and Jonathan Haidt’s 2015 Atlantic article, “The Coddling of the American Mind,” which carries the scarifying subtitle: “In the name of emotional well-being, college students are increasingly demanding protection from words and ideas they don’t like. Here’s why that’s disastrous for education—and mental health.”

Before I show what I've found, recall that Deresiewicz, a former Yale College professor of 19th century English literature, took the elite American college world by storm in 2014 with what he characterized as “a letter to my twenty-year-old self . . . about the kinds of things I wish someone had encouraged me to think about when I was going to college.” I watched him declaim this to a large Harvard hall packed with students unnerved by the charge in “Excellent Sheep” that they and their parents were “creating a caste that is ruining itself and society” and afflicting students with “the panic, the exhaustion, the sense of emptiness and aimlessness, the fearfulness and cynicism” in elite-college life.

The larger social consequences were equally fearful, Deresiewicz wrote, citing “the mediocrity, the cluelessness that comes of social segregation, the spectacular failure of leadership." He announced that "the time has come . . . not simply to reform that system root and branch but to begin to plot our exit to another form of leadership, another kind of society, altogether.”

A year later, Lukianoff, president of the campus-crusading Foundation for Individual Rights in Education, and the business psychologist Jonathan Haidt rattled the elite college world again but not by demanding root and branch reform of our radically unequal society. Instead, they blamed politically correct liberalism for coddling the young against our society's presumptively legitimate rigors and rewards.

I read and listened to the debate with recognition, taking on Lukianoff and Haidt here in Salon at the time and also Deresiewicz, here in Salon, as well. Then, just last month, I dug up a vaguely remembered essay, “Why They Leave: The Tyranny of the Harvard Mirror,” that The Harvard Crimson published on December 9, 1975. The column had sat unread in the paper's archives for decades (more than 20 of those years only on paper or microfilm), as well as in a file folder at the bottom of a box in my closet.

Imagine my surprise on rediscovering (and, slowly, on recalling) that the essay had been written by one James A. Sleeper, a 20-something doctoral student of late-adolescent developmental psychology at the Harvard School of Education who was also teaching writing to the college’s freshmen -- a member, in short, of the caste Deresiewicz would rattle 40 years later with his letter to his younger self. Unlike “Excellent Sheep,” however, my essay, occupying a full, broadsheet page of the yellowed, crumbling copy of The Crimson in my files, had been written not to a younger self but by one to his peers. Only now, as a recovered pearl, was it written also to my older self and perhaps to Deresiewicz, Lukianoff, Haidt and their enthusiasts.

With mounting astonishment, I read myself making many of what would later be Deresiewicz’s arguments in my own words: "When so many talented, well-intentioned people are chronically lonely and confused -- or stridently busy and heartless about it -- there have to be reasons," I’d written, one of those reasons being that "[W]e are being fatefully socialized into a way of naming and knowing the world that renders whole populations invisible and whole regions in ourselves and that saddles us with gloomy characterizations of human nature that no one can keep faith with and aren't half as realistic as their proponents insist."

In the same essay, though — as if rebuking Lukianoff and Haidt’s complaints about whining or censorious students and their indulgent and/or ideologically inflamed mentors — I urged my peers “to reject the emotional parsimony of [an] institutional mentality which confuses demands for a sensually just and loving community with cries for a nursemaid.” In other words, I called both for better, deeper nurture and for more social justice.

If this little blast from the past casts any light on what Deresiewicz, Lukianoff, and Haidt have been writing, it's just as true that their declamations cast new light on what I wrote so long ago. The worries and insights of 1975 do implicitly discredit today’s orchestrated hysteria about a supposedly unprecedented meltdown among pampered college kids. But something in that hysteria suggests that some of us who were young in 1975 had something corrective to offer, after all, even if weren't quite the prophets we thought we were.

What we did know was that the political and the personal are inseparable — conservative campus critics, take note! — but that it matters that we integrate and balance them better than do the politically correct. I think that some of us understood this better than today's public scolds and visionaries do. But take a look, and judge for yourself.