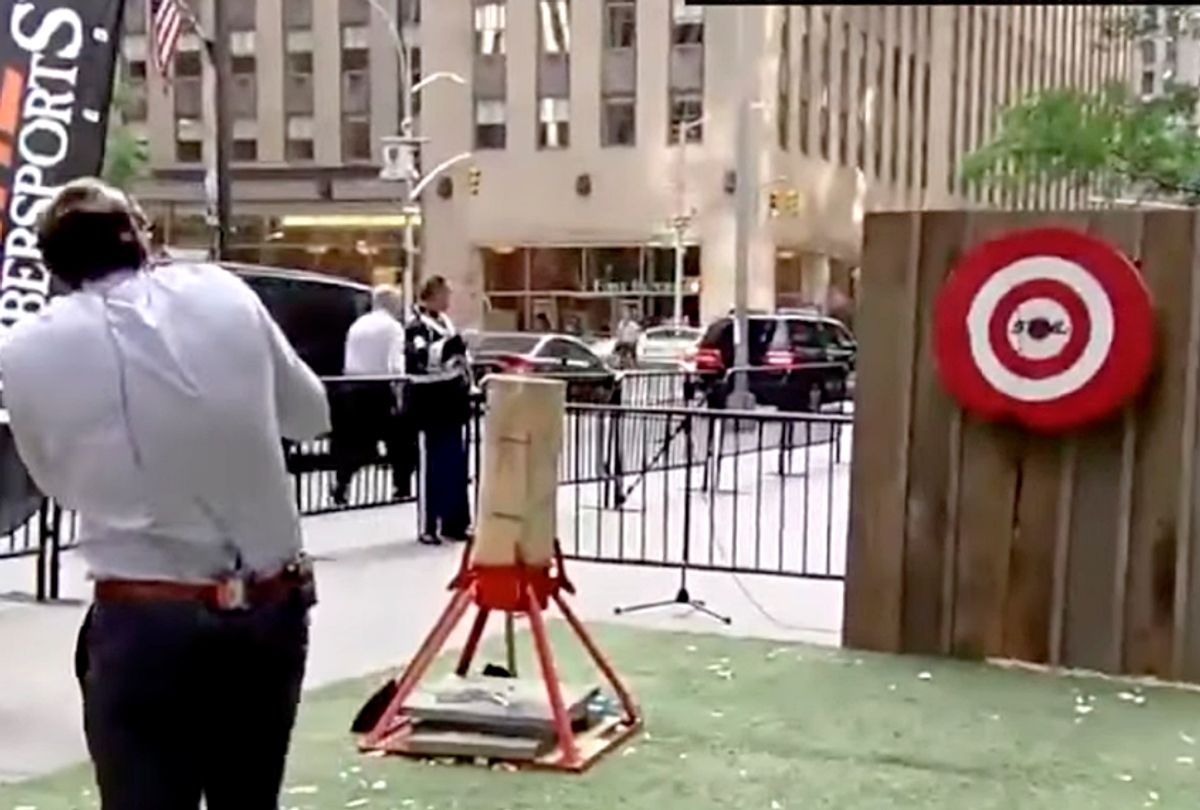 A man who was struck by an axe thrown by "Fox & Friends" host Pete Hegseth is now suing him and the network over the incident.

During a segment on the "Fox & Friends" set in 2015, Hegseth tried to throw the axe at a target but he overshot, missed the target and struck Jeff Prosperie, a West Point drummer performing behind the structure. Prosperie claims he sustained injuries after being hit by the axe on the show's set. He alleges that Hegseth "negligently attempted to throw an axe at a 'target'" and that the target was "negligently placed in an area which put pedestrians and other individuals, including the Plaintiff, in the path of peril."

A video posted by Prosperie in the aftermath of the incident shows the axe hitting him.

The lawsuit, filed in the New York Supreme Court on Tuesday, claims that the defendants in the case, which include Hegseth, Fox News and "Fox & Friends," were "negligent, wanton, reckless and careless" in orchestrating the ax-tossing event and that it put pedestrians and other individuals, including Prosperie, in danger.

The document also states that Hegseth was negligent in his throwing of the ax, alleging he did so "without proper training and in failure to properly look for pedestrians while performing a dangerous act in public."

In his lawsuit, Prosperie says that he suffered "severe and serious personal injuries to his mind and body" after the axe was hurled at him, including some that are "permanent with permanent effects of pain, disability, disfigurement and loss of body function."

The document states that he has had to spend "diverse sums of money" on his recovery and that his injuries have caused him to "lose substantial periods of time from his normal vocation and activities."

Prosperie is seeking an unspecified amount in damages.

In a statement, Fox News said, "The incident involving Jeff Prosperie from 2015 was unfortunate and completely unintentional. FOX News immediately apologized to Prosperie and offered medical assistance, which he declined saying he was 'okay.' The network also offered compensation, which he declined as well. We have not heard from Prosperie since 2015, so the lawsuit is surprising and we are reviewing it."

Prosperie addressed the incident on his Facebook page at the time, writing, "I am thankful to God that the double-sided blade only hit broadside on the outer elbow with significant impact and a couple of cuts as it fell along my wrist. It could have been much worse or fatal. Focusing on full physical and emotional recovery."