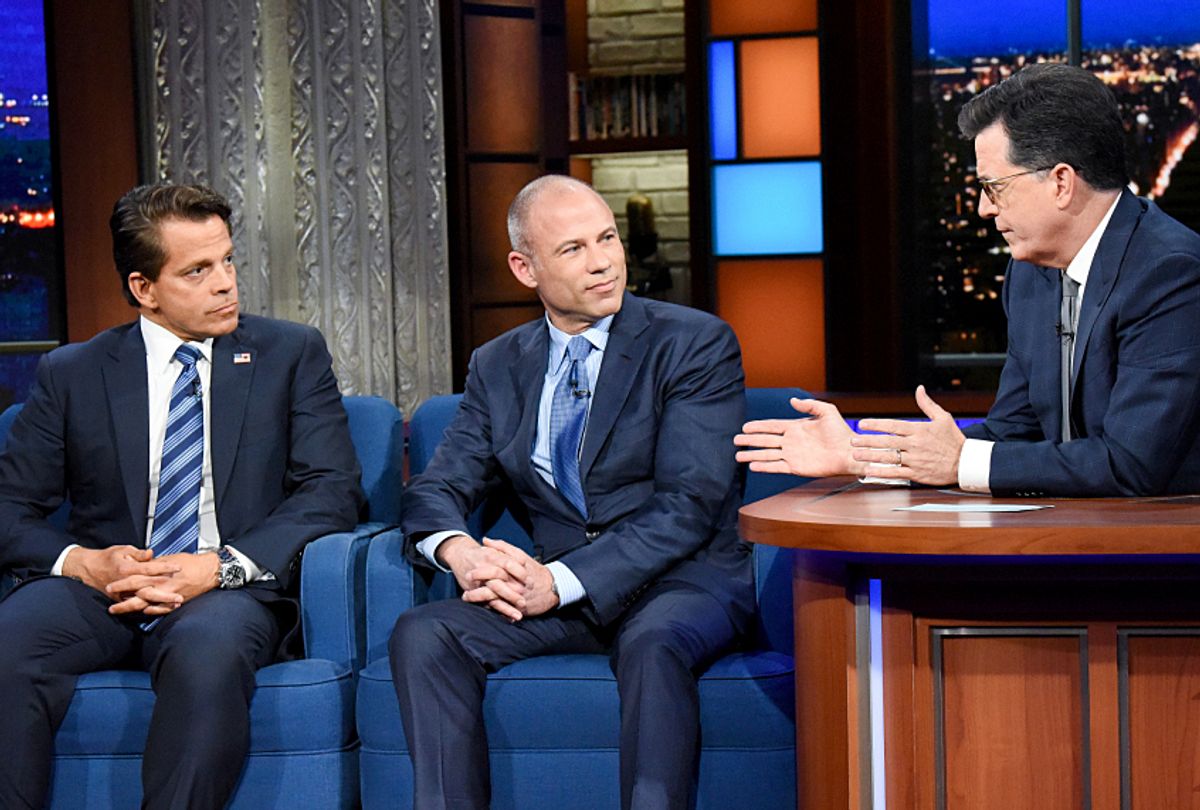 Michael Avenatti and Anthony Scaramucci appeared together on "The Late Show with Stephen Colbert" Wednesday night after both denying a potential TV collaboration a month ago.

And the late-night host wasted no time in questioning Stormy Daniels' lawyer and the former White House communications director about their unlikely friendship.

"The word is you guys were shopping a show where the two of you would debate issues of the day on television," Colbert said. "Word is you took it to CNN, took it to MSNBC."

"Let me say two things," Avenatti replied. "I don't have a lot of rules in my life. But one of the rules is that I never do a show with a guy whose first name is 'the.'" (It was dig at Scaramucci's nickname, "The Mooch.")

Colbert wasn't buying it. But he shifted the conversation someone the pair both knew – Michael Cohen – and to the news that he had parted from his legal team. Moreover, some sources say Trump's longtime personal attorney expects to be arrested and could possibly flip on the president amid a wide-ranging federal investigation.

Scaramucci echoed that Cohen "is likely to be indicted," but he did not want to speculate about whether Trump's longtime lawyer would flip.

Colbert poured Avenatti and Scaramucci glasses of rosé as he moved on to the subject of Trump and whether or not the president would attempt to pardon himself if it came down to it.

"Oh, there's no question in my mind that he would pardon himself," Avenatti said. "Because this guy is one of the biggest narcissists you've ever seen in your entire life."

The chummy jokes and buddying up between Colbert and his guests halted when the comedian demanded that Scaramucci acknowledge that Trump has lied and been caught for it.

"Rudy Giuliani is an absolute walking disaster," Avenatti said. "This is what happens when an entire administration is built on a house of lies . . . When you can’t keep your lies straight this is what happens."

Scaramucci begged for some historical context. He claimed that George Washington might be the only president in the history of this country who did not lie while in office, as a backward way of insisting that the shady maneuverings of Trump and his administration was business as usual.

"If you lie, there is a consequence for having been caught," Colbert chided. "That is the foundation of public morality and ethics. If you say [Trump] lies and that’s fine, where are we going?"

Scaramucci wouldn't cave. We have all lied, he insisted.

"But not about colluding with the Russian government to undermine our democracy!" Colbert pressed.

You can watch the full interview here:

Anthony Scaramucci was fired after 11 days in the White House, but he remains an avid Trump defender.