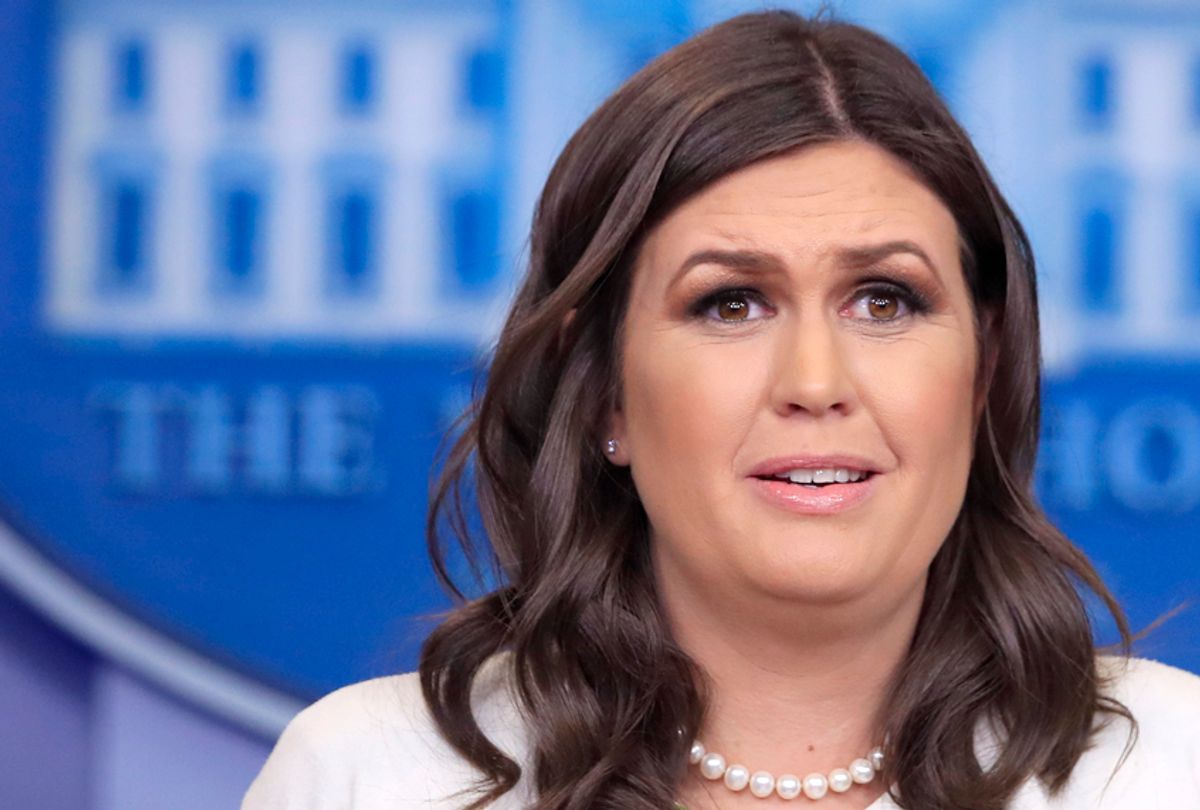 Sarah Huckabee Sanders took to Twitter on Wednesday night to deny an earlier report that she is planning on leaving the White House.

"Does @CBSNews know something I don’t about my plans and my future?" Sanders wrote on Twitter. "I was at my daughter’s year-end Kindergarten event and they ran a story about my 'plans to leave the WH' without even talking to me. I love my job and am honored to work for @POTUS."

It is worth noting that the CBS News report which broke the story that Sanders was planning on leaving the White House at the end of 2018 also stated that "neither Sanders nor Shah responded to repeated requests for comment before this story was published."

The reference to Shah is used to discuss Raj Shah, who serves as White House principal deputy press secretary and deputy assistant to the president, who CBS News had reported was also thinking of leaving the White House but had not yet figured out an exact date for doing so. "There will be even more people leaving the White House sooner rather than later, laid off or just leaving out of exhaustion. And it is going to be harder to find good people to replace them. I do think they're going to have a harder time getting the second wave of people in than the first, because those people were loyalists, and [new] folks will have to be recruited and encouraged and then survive the vetting process. In addition to all of that, the president prefers to have a small communications staff," a source close to the administration told CBS News.

Kathryn Dunn Tenpas, a senior fellow at the Brookings Institution who specializes in studying staff turnover in presidential administrations, told CBS News that the sheer quantity of personnel leaving the Trump White House is alarming and that if the same trend existed in a private business, it would be perceived as a sign of crisis.

"So many people haven't even stayed in these jobs to master the learning curve. You don't hear much about the importance of expertise. This is a White House that doesn't seem to value that or understand the consequences of it. It's kind of one of those things where we may not know the vulnerability of lacking expertise unless there is a crisis — or a crisis that may have been averted had a person been in the room," Tenpas told CBS News.

Sanders has long been criticized for the occasions when she has seemed to lie on behalf of the president and then been caught at it. The most recent occasion in which she was called out on this took place earlier this month when several journalists called her out for claiming that the president "certainly didn't dictate" a statement that misled the public into believing that the only reason why Donald Trump Jr. and other high-ranking officials from Trump's 2016 presidential campaign met with a Kremlin-connected lawyer was to discuss Russian adoption policy. That claim was later determined to have been false, with the president himself actually having dictated it to his aides.

"Maybe she's OK with lying. There's no question that she spread lies at this point. Whether or not she was told the truth, I guess we don't know. But she spread a lie, and she is the White House press secretary. And she spread a lie – and allowed it to hang out there for months," CNN's "New Day" co-host John Berman declared.

"How are we supposed to know what to believe? How can we believe what you're saying from the podium if his [Trump's] lawyers are saying it's entirely inaccurate?" Josh Dawsey of The Washington Post asked Sanders.When Jordan Fabian of The Hill insisted that Sanders explain the inconsistency between what she said in August and the subsequent revelations about what actually happened, she refused to do so. "This is from a letter from the outside counsel, and I'd direct you to them to answer that question," Sanders told Hill.

When Peter Baker of The New York Times tried to pressure her into answering the question, Sanders repeated her earlier assertion.

"Once again, this is a reference back to a letter from the outside counsel. I can’t answer, and I would direct you to them," Sanders told Baker.

"Literally, you said he did not dictate. The lawyers say he did. What is it?" Dawsey asked Sanders in an insistent tone. The White House press secretary once again refused to answer any questions about the inconsistency embedded in her August statement.

In May, Sanders told The New York Times Magazine that she was hurt by the attacks on her honesty:

“It certainly bothers me,” she said of the “liar” rap. “Because one of the few things you have are your integrity and reputation.” She added that “there’s a difference between misspeaking or not knowing something than maliciously lying.”

No one would argue that a person’s integrity isn’t of paramount importance, I said. But I asked Sanders if there is a danger in linking your integrity to a president who might not always be known for accuracy. There have been many instances where the president has not told the truth, I said.

“But you’re asking about me,” Sanders said, not challenging the premise.

True, I said, but she has to speak for him. I asked the question another way: “Is it possible to be factual if you’re speaking for someone who is trying to make a point that is not factual?”

“Uh, I don’t know,” Sanders said. “I’m not following totally.” But it was important for me to remember this: Donald Trump is president. “And I think one of the biggest reasons Donald Trump is president is because he is not scripted, not following your conventional playbook.” He is “the ultimate disrupter,” and people find his plain-spoken style “refreshing.” They like that he is unfiltered, she said, like that he “tells it like it is.”