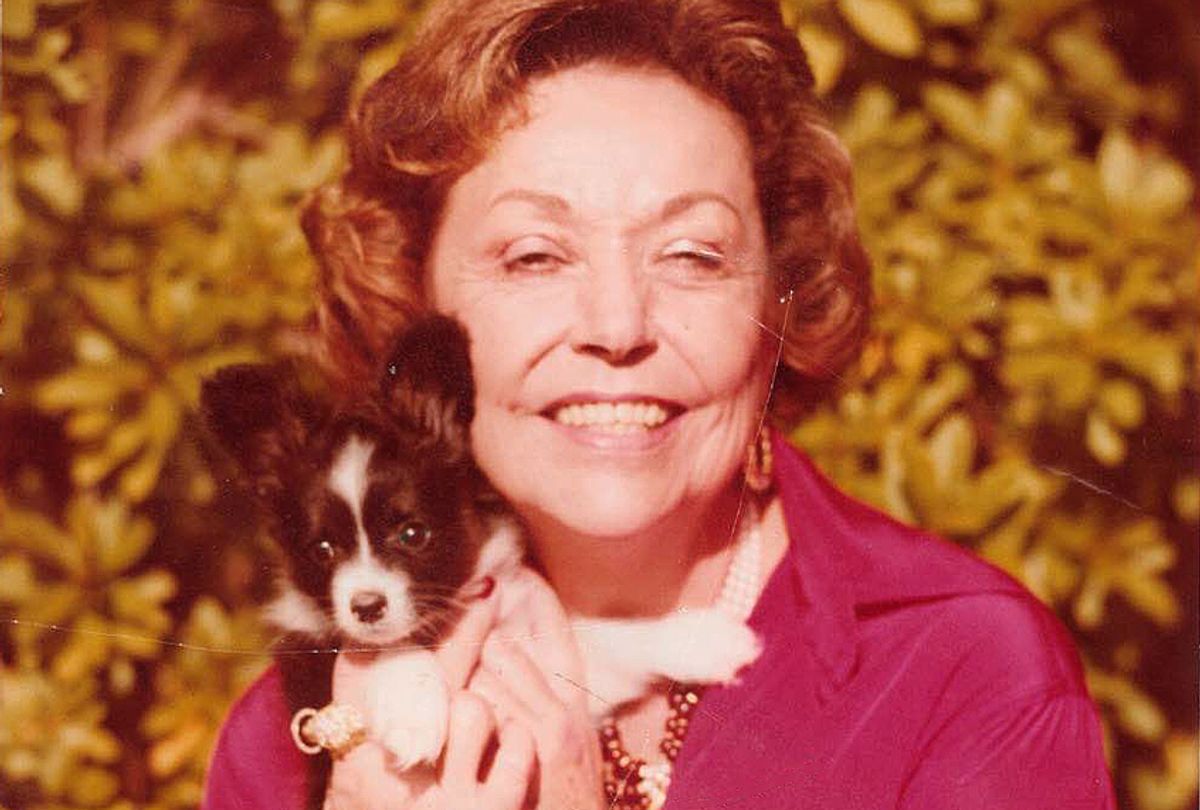 A family photo of Vida Wayne (courtesy of the author)
--

“Your Aunt Vida will be here in three hours,” my mother announced. This was news to me. “Put down the book and go pick up your room, please.” Together with Albine, Peg, Gladys, Hanna, Lynne, Christine and Norma, Vida was one in a cast of women, none of them blood relatives, whom I was taught as a child to address as “Aunt.” I had no real aunts. Or uncles, cousins, or even grandparents. After my parents and my sister, these middle-aged women, all old girlfriends of my mother, were the nearest I had to family.

Vida, I learned with some digging, was about to land at JFK Airport en route from London with two of her finest Papillons, a kind of toy spaniel. Vida would stay with us for the week, in our New York City apartment, while she showed her dogs at the Westminster Kennel Club Show. Westminster was the biggest dog show of them all, and Vida was coming to win.

Among my “aunts,” Vida Wayne was the most intriguing. For starters, she was an oil heiress. Vida was born Vida Halliburton, daughter of Erle P. Halliburton, founder of the Halliburton Company and one of the world’s richest men. Vida, Erle’s fourth of five children, never wanted for anything.  She married pop singer and Hollywood producer Artie Wayne, and together, their young children and film crew in tow, plied the world’s oceans in their yacht, a converted Navy minesweeper, making movies. This was when my mother, a radio producer seeking her own fortune in Hollywood, struck up a friendship with Vida. Ultimately, Vida’s interests shifted to her prize-winning dogs, and she was now mostly on the road with them. Vida was fun, and wickedly eccentric, and unlike some of my mom’s other friends, not disposed to climb into my business.

It was February 1980. A crust of snow coated the sidewalks, and flurries were in the forecast. My sister and I scrambled to clean up the room where Vida and the dogs would stay. We put down towels where the dogs would track in snow from the park. As city kids, my sister and I had never owned a dog, and we were excited to receive our new charges.

I didn’t really know Vida — a sandwich layer filled by my mother saw to that — but she was a welcome guest. As were the other “aunts,” who came to stay from time to time. All were unusual, even exotic women. Norma was a model and TV “weather girl.” Peg was the creator and star of an early radio and TV sitcom. Gladys was a song and radio jingle writer. And so on.

Albine, while not in show business, was the most mysterious of all. She had known my mother since early childhood, growing up in the house next door in Queens, New York. She was there for the upheavals of my mother’s youth: the times she ran away from home, the first marriage about which my mother never spoke — scraps I picked up from sentence fragments overheard in empty corridors. But if Albine had stories — information — about my mom, she wasn’t telling.

I understood roughly how these women were connected to my mother, but little else about their friendships. Each woman was linked to a period in my mother’s life, including her career in radio. As a child I held a suspicion that these links concealed elusive truths about my mother — truths she kept from me and my sister. But if these truths were discernible from the way my mother pursued these dear friendships, I didn’t see it. Nor did I trouble to ask why I was to address these women as “Aunt.” I simply did, in the way of a child. It was not until I became an adult that I understood this designation was really about my mother, a gaudy homage to friends she had accumulated, and not at all about me, or even them.

On schedule, Vida arrived by taxi with the two Papillons. The date was Sunday, February 10, 1980. Away from the primping and klieg lights, the Papillons were still dogs, and my sister and I spilled out onto the apartment landing to scoop them up.

Something immediately wasn’t right about Vida. Normally smooth and confident, today she was unfocused and shaky. As she settled into our apartment, and over the next couple days, Vida’s peculiar behavior had my sister and me whispering to each other in the halls: “Aunt Vida just came back from walking the dogs in her nightgown. In Central Park. It’s February!” I broached the subject with my mother. She waved me off, with a quick sound bite about medication. Beyond that, there was no discussion of Vida’s behavior. Per usual I was out of the information loop. I decided to keep my distance.

Our apartment was a hive of activity on Tuesday morning, the opening day of the Westminster dog show. The dogs had the run of the apartment, and they were yapping about. The dogs’ handler, the renowned Barbara Humphries, came by to collect the dogs to shuttle them to Madison Square Garden. Meanwhile, my mother and Vida, both fashionable women, were in the midst of their own productions, primping, perfuming and preparing for the day out. Vida always wore jewelry befitting an heiress, and this day she was decked out in her diamonds. I was in my room getting dressed for school, when I heard Vida in the entryway yelling in to my mother: “Charlotte, are you ready? It’s getting late.” My mother was going to drive Vida down to the Garden. My mother, from the other end of the apartment, yelled back: “Just a minute, Vi, I’m finishing my makeup.”

I slipped past Vida in the entryway, exited our apartment building, and hopped on the bus to school. The day was uneventful, until I returned home. “David, have you seen your Aunt Vida?” my mother asked rhetorically as I came in and dropped my bag. I had not. My mother related how she’d come out of her bedroom that morning, ready to drive Vida, and Vida was gone. Eventually my mother drove down to Madison Square Garden, expecting that Vida had grown impatient and left the apartment without her. But Vida wasn’t at Madison Square Garden, and didn’t turn up there all day. My dad arrived home from the office. We had dinner. My mother called the police.

The police were nonplussed, as my mother would later recount:

“It’s been less than 24 hours, ma’am, she’s not a missing person,” the detective chided over the phone.

“She’s wearing a quarter-million dollars in jewelry,” my mother rejoined.

There was no word from Vida that day, or the next day, or the next. The NYPD missing person’s unit visited our apartment several times. An alert was issued: “Vida Wayne is 58 years old, 5’ 4”, weighs 120 lbs., and always wears a man’s ring with a gold lion’s head with a diamond protruding through the nose on her right index finger. Anyone having information should contact. . . .”

My mother engaged a psychic.

Leads were plentiful. Vida’s wallet was found in the back of a taxi. The New York Times reported that the taxi had dropped Vida at Madison Square Garden, but the driver didn’t notice if she’d entered the building, and no one else came forward to say they saw her there. Later that day, according to the police, Vida walked into a McDonald’s at Fifth Avenue and 33rd Street and asked an employee behind the counter to cash a $50 traveler’s check. The employee turned away briefly, and when she returned Vida was gone, leaving behind a fur hat and a pocketbook containing an airline ticket to Los Angeles.

After Vida disappeared, my sister and I continued to go to school, my dad to work, and honestly I don’t recall what my mother did. Truth is, I don’t remember much from that week — surprising to me given that an oil heiress, one of my mom’s close friends, my “Aunt,” had just vanished from our home. I seem to recall that, apart from the disappearance, the week felt ordinary.

I’d like to report that the mood in the apartment was frenetic, as we organized searches for Vida; that we combed the streets looking for her; that we posted fliers; that all non-missing person activity came to a halt. That we were distraught, my mother in tears. But I can’t say these things — because they didn’t occur.

If we huddled as a family and talked about Vida, the fate that might be befalling her, and our own feelings about Vida’s disappearance, I don’t remember that at all. What I do remember, quite distinctly, is that, with Vida missing only a few days, my mother drove my sister and me to Vermont to ski for President’s Day week. As we stuffed our skis in the car, I recall asking my mother, “Is it OK to leave?”  “Yes,” came her one-word reply. I knew not to question, and I climbed into the backseat. In many families, when the going gets tough, the tough get going. In my family, this was time for a road trip.

It’s a regular source of surprise to me, the things people choose to say to the ones they love -- and the things they don’t. I imagine my family sitting at the dinner table in the days following Vida’s disappearance, staring at each other and wondering who was going to speak first about the tragedy unfolding in our home. But if my mother wasn’t going to ask if I was upset about Vida going missing, I wasn’t going to volunteer it. I wasn’t going to lead that conversation.

And I’m left to wonder how uncommon a dynamic this is in families: the child looking to the parent for direction; the parent who won’t — can’t — engage the child. Each person contributing to a growing space between, and into that silent space flowing misgiving and regret, a warehouse of feelings not expressed and actions not taken. And what’s left, I think, must be blankness and rigid veneer, slick surfaces to which memory and sentiment don’t adhere.

I don’t remember when they pulled Vida’s body out of the East River that summer. Or when the medical examiner’s office returned her — her jewelry intact — to her family. I don’t remember if there was a funeral for Vida, and if there was, if my mother attended. I don’t remember what I may have said to my mother at the time in consolation, or what she may have said to me. But after 38 years, I remember enough to have learned, finally, that this is not just a family story about an heiress who disappeared from a New York City apartment. It’s also a story about family, and the things we leave unsaid.

David London was born and raised in New York City, and now lives in Denver, Colorado, where he is a practicing attorney.