What it's like growing up with an LGBT parent, in their kids' own words

"Because I was two when my dad came out, my view of the world was always acceptance, always love" 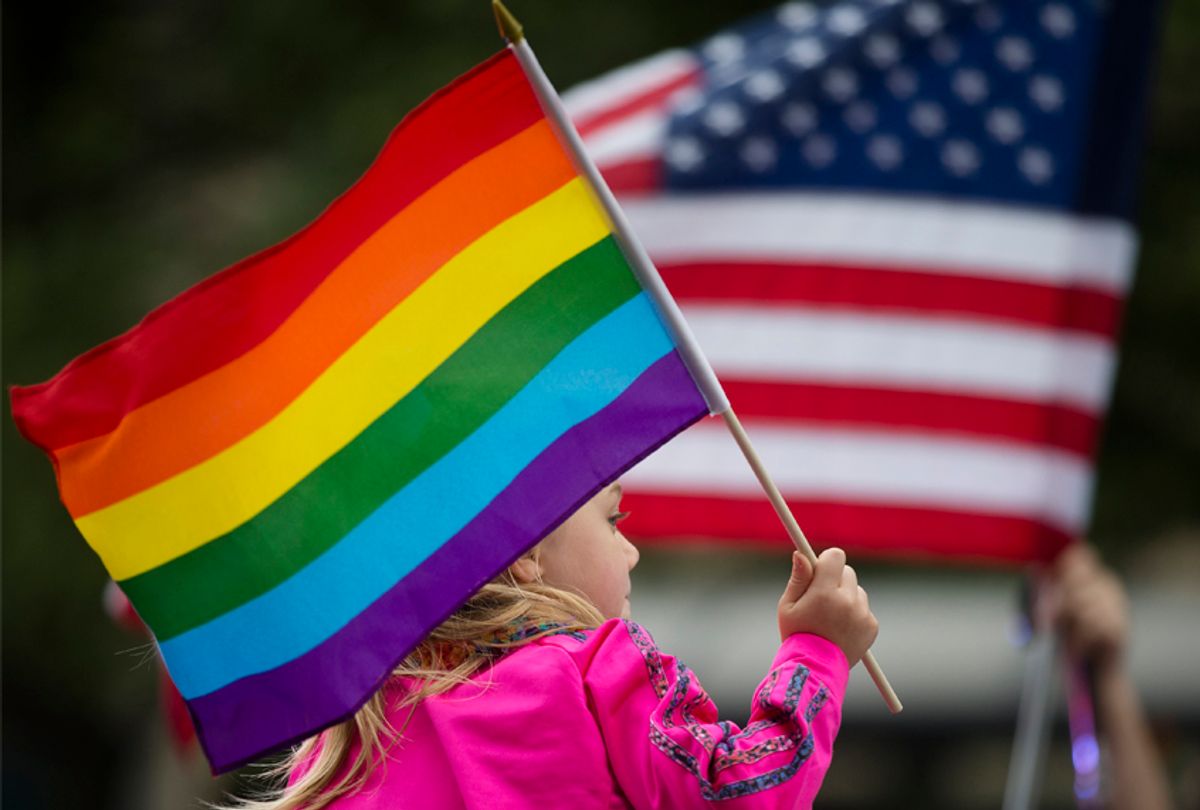 Since Rainbow Relatives is essentially about kids and their acceptance of the LGBTQ community, it was imperative for me to get their perspective, as well. The following are some questions I asked children (some now grown) with LGBTQ relatives and their various responses about their experiences.

If you could give advice to other kids who have a gay/lesbian/ bisexual/transgender parent or relative, what would it be?

What are some benefits of having an LGBTQ parent or relative, or same-sex parents?

How old were you when you found out your parent or relative was LGBT? How did you find out, or how were you told? How did you react?

In addition to participating in the survey, Caroline Shores, daughter of Del Shores, was also kind enough to sit down with me and share her experience growing up with a gay father. For Caroline, “gay” was always around. Her father came out when she was barely a toddler, and she went to a very progressive elementary school in California, where she never had any problems since several other students had gay/lesbian parents.

In her words: “When I was twelve or thirteen, I went to middle school in Van Nuys, California, and that was the first time I started to see homophobia. My first experience with that was when I was having a slumber party for my thirteenth birthday. One of the girls told me yes, she was coming. A couple days later she said, ‘I’m sorry, but my dad won’t let me go because your dad is gay.’ I didn’t even know why that was an issue. It didn’t make sense to me. I went kind of ballistic on her, really huge fight, and [for the] first time ever, I felt hatred toward my family.

“It continued in that middle school. Students used expressions like ‘That’s so gay.’ Students called each other faggots. I would tell the principal and she would then have a lot of tolerance talks with the students. These kids were very rough. My next experience was in Spanish class. We had a family tree exercise and in my family tree I had my stepdad and my dad on the same side and had that written in Spanish. The teacher said during her presentation, ‘Oh, I think you got confused. That goes on the other side next to your mom.’ I go, ‘No, that’s my dad’s husband,’ and this kid, a boy (sorry, boys, but the consensus is boys are worse than girls when it comes to this) started making these really graphic comments in the back, like ‘faggot this’ and sexual comments. I stopped the presentation and said, ‘Can you come up and tell me that to my face?’

“She didn’t really hear the boy. She just saw and heard me arguing with him. The principal suspended him. His mom called my mom and said, ‘We didn’t raise him that way, we’re sorry.’ There were consequences. It was shocking to me. I was blind to that kind of attitude.

“The progression in the last few years has been huge. Now, probably other people would have stood up for me, too, in that situation. It’s not acceptable anywhere. Best thing to do with bullies is stand up for yourself; they don’t like that. They want to pick on the weak. This is my family and I want to stand up for them. It’s an obligation, it’s not a choice. And it’s nothing to be ashamed of.”

I also asked Caroline about her experiences with being a child of LGBTQ parents and practicing a religion. She said, “I think that’s where the hatred really starts, with religion and what’s taught. I went to a Catholic school. I had a problem with one of the teachers who was so homophobic. In a private Catholic school, they can really do whatever they want. We have to sign a contract so the rules are different. I fought back and pulled out my evidence. Lately when I hear anything religious based and homophobic, I try to keep in mind these people are on the wrong side of history. They are the ones who are going to be looking stupid in the future. I chalk it up to ignorance, not knowing what they are talking about. It’s easier not to be offended this way because they don’t know any better and you really can’t change everyone.”

Another subject Caroline has had to school people on, besides religion, is the “It’s a choice” argument. Here’s how she handled it: “I have a male friend who inquired whether another male friend had a girlfriend, and I said, ‘No, he has a boyfriend.’ He said, ‘Whatever, it’s a phase.’ I go, ‘It’s not a phase,’ but he was like, ‘I mean, he’s choosing it,’ and he was so adamant about it. So finally, I asked him, ‘Okay. When did you choose to be straight?’ He was like, ‘Yeah, you have a point.’ A lot of the time that question does the trick of making people understand it is not a choice. Why would you want your rights taken away from you?”

When we discussed the benefits of having a gay dad, she said she considered it a blessing. “I wouldn’t be the person I am today without it. My dad has always been my rock, the person I look up to. Because I was two when my dad came out, my view of the world was always acceptance, always love. I was always prone to be friends with anyone different, like the nerdy kid or the kid who had no friends. It made me more accepting to everyone. I don’t know if I would have been that way otherwise.”

Caroline also made a good point about how much easier it’s becoming for gay people to come out, find support groups, and not feel as alone with so many online resources and social media providing immediate access to information. “There’s even a white rapper, Macklemore, with a gay anthem song [with Ryan Lewis] called ‘Same Love,’” she said. Since the hip-hop industry has been known for not being very gayfriendly, Caroline saw it as a huge step for a straight rapper to come out with a song like this. “That wouldn’t have happened even a few years ago. So much progress is being made.”

Sure enough, a few months after our interview, Macklemore performed “Same Love” on the Grammys telecast as Queen Latifah married same-sex couples and Madonna joined in with “Open Your Heart.” Caroline Shores is a wise and loving young woman, living proof that gay or not gay, Del Shores is an excellent parent.