Why white nationalists love the mystery of Roanoke, the lost colony 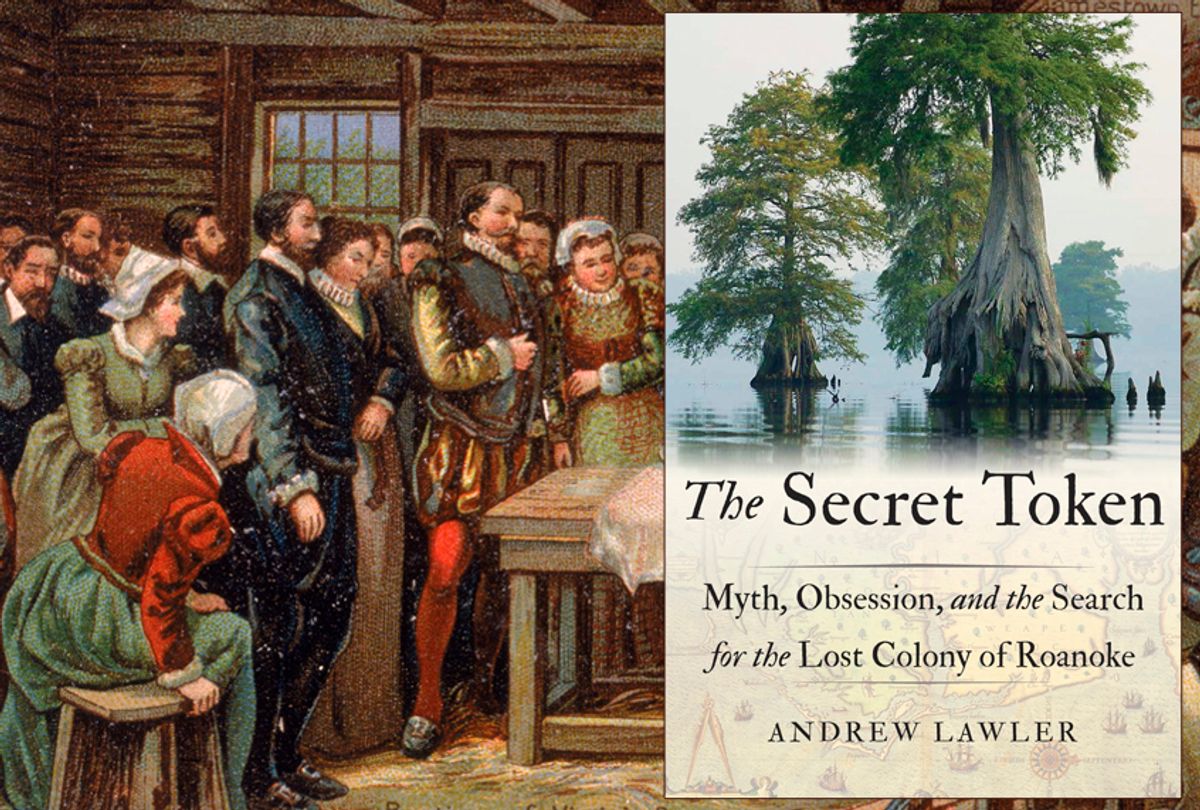 "The Secret Token: Myth, Obsession, and the Search for the Lost Colony of Roanoke" by Andrew Lawler (Getty/Hulton Archive/Penguin Random House)
--

"The Secret Token: Myth, Obsession, and the Search for the Lost Colony of Roanoke" is a very special kind of popular history. While most students of American colonial history are at least vaguely familiar with the mystery of Roanoke Island — the famous "lost colony," the first permanent English settlement in the so-called New World that seemingly vanished into thin air — this new book by Andrew Lawler explores not only what might have happened to those colonists, but why their disappearance is shrouded in enigma for so many Americans.

In 1587, the colony of 115 people settled in what is now Hatteras Island, North Carolina, to form the very first outpost in what would eventually become the American colonies. Development of the colony seemed promising at first, but when colonial governor John White returned in 1590 on a resupply mission, he found that all of the inhabitants had vanished. The only clue as to what had happened to them was a "lost token" carved into a post on the fence around the village — the word "CROATOAN." The letters "C-R-O" has also been carved into the wood of a tree.

Of course, the failure of the Roanoke Colony did not put an end to the British imperial project in North America, not by a long shot. By 1607, the colony of Jamestown in modern Virginia was founded and made to last, and less than 170 years after that (a blink of an eye in terms of human history), a collection of 13 much larger colonies would rebel against the Crown to form their own country, where this writer can be found in 2018 writing his review of "The Secret Token."

Yet the legend of the Roanoke Colony has endured, a haunting reminder both of the perils of the early colonial days and a giant question mark at the center of America's origin story. This is where Lawler's book comes into the picture, diving headfirst into the latest developments regarding the fate of the colonists and providing colorful, affectionate portraits of the modern men and women who have been involved in cutting-edge forensic and archaeological investigations into the Lost Colony. Most importantly, though, Lawler sheds light on why the story of the Roanoke Colony remains so important today.

"It wasn't just the archaeology," Lawler told Salon. "I went into it as a science writer following this mystery that archaeologists were going to solve. And in the course of that, I began to dig into the history of the Lost Colony itself and I asked a simple question: When did the term 'Lost Colony' come into use? And this is what led to what I think is an even more interesting aspect to this story than 'solving the mystery,' and that is that the 'Lost Colony' is a product of the 19th century. It was only in the 19th century that the Lost Colony was 'lost.'"

As Lawler explained, there was a specific reason why Americans in the 19th century were so attracted to the story of the Roanoke Colony — namely, that it played into prevalent ideas about race.

"And the reason I discovered it was 'lost' was that the idea of the colonists assimilating with the Native Americans was a taboo," Lawler told Salon. "Not only was it a taboo, the very idea was illegal, because at that point it was illegal [for] 'colored' — or non-whites, or blacks — to mix with one another."

"So I realized there was something more interesting here than a mystery," Lawler continued. "There was a way in which the 'Lost Colony' told us a lot about American anxieties about race, and also about immigration. Because the Lost Colony and Virginia Dare, who was the first English child born in America and born on Roanoke Island, they became legends in the 19th century."

The 19th century, as Lawler points out, was a time when Andrew Jackson became a widely beloved populist president in large part by stoking fears of slave rebellions and Native American uprisings. It was also a time when new immigrants from places like Ireland, Italy and Eastern Europe poured onto America's shores — immigrants who were not considered white by the Americans who already lived here. These fears about interracial mingling and foreign influence were at the root of the Roanoke Colony's mystery, especially since one of the most likely explanations for its disappearance is that the colonists were absorbed into the nearby Native American tribes.

This history of racism was not far from Lawler's mind when I spoke to him about his book; he pointed out how at least one popular anti-immigrant website (which has published work by white nationalists) directly references Virginia Dare.

"You can check out VDare.com, which is a website run by a man named Peter Brimelow, an English immigrant who has an anti-immigrant website, a website where he raises concerns about the influx of particularly African and South American peoples into the United States, basically 'the brown peoples,'" Lawler told Salon. "So it's very much alive. And this idea of white Americans being surrounded and endangered and encircled by 'brown people' is a very old idea, it's not new, and the 'Lost Colony' is very much a way into that story."

Lawler perhaps identified the political relevance of his book, and the Lost Colony's story, most poignantly in a May editorial for the Washington Post:

Virginia Dare’s story reveals our desire to assimilate and our anxiety about doing just that. This conflict is at the root of the cultural battle that led to violence last summer in Charlottesville, as white Americans confront the growing numbers of black and brown people with whom they share a country. The infant of Roanoke offers us two very different futures. We can be martyred for some imagined race, or we can recognize that to be American is, in its essence, to be willing to redefine our beliefs, goals and even our ethnicity. Only by getting lost can we become something new.

I couldn't have put it better myself.