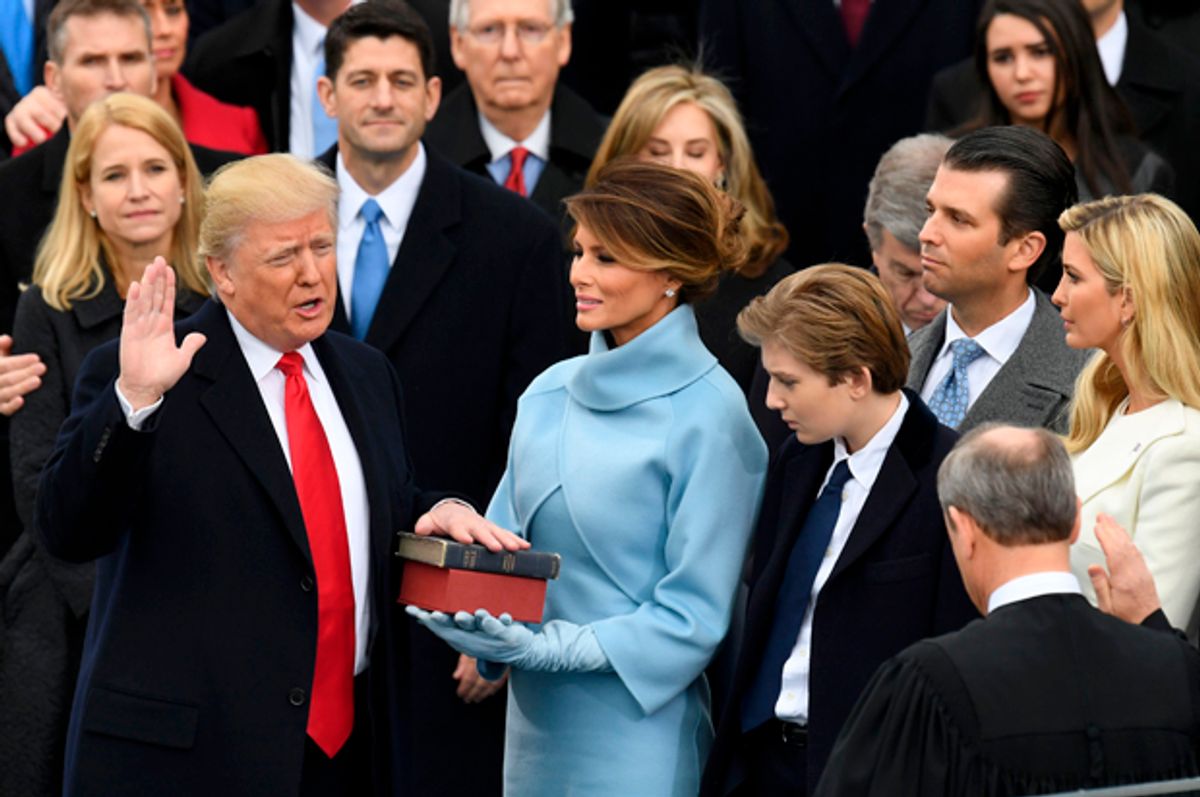 US President-elect Donald Trump is sworn in as President on January 20, 2017 at the US Capitol in Washington, DC (Getty/Mark Ralston)
--

I keep hearing that if Trump fires Mueller we’ll face a constitutional crisis.

Or if Mueller subpoenas Trump to testify and Trump defies the subpoena, it’s a constitutional crisis.

Or if Mueller comes up with substantial evidence that Trump is guilty of colluding with Russia or of obstructing justice but the House doesn’t move to impeach him, we’ll have a constitutional crisis.

I have news for you. We’re already in a constitutional crisis. For a year and a half the president of the United States has been carrying out a systemic attack on the institutions of our democracy.

A constitutional crisis does not occur suddenly like a coup that causes a government to collapse. It occurs gradually, as a system of government is slowly weakened.

The current crisis has been unfolding since the waning days of the 2016 campaign when Trump refused to say whether he’d be bound by the election results if Hillary won.

It continued through March 4, 2017 when Trump claimed, without evidence, that Obama had wiretapped his phones in the Trump Tower during the campaign.

It deepened in May 2017 when, by his own admission, Trump was thinking of “this Russia thing” when he decided to fire FBI Director James Comey, who had been leading the bureau’s investigation into Russian meddling in the 2016 election, andthen admitted to Russian officials that firing Comey had relieved “great pressure” on him “because of Russia,” according to a document summarizing the meeting.

Over the last few weeks, Trump has done just this.

First he accused the FBI of sending a spy to secretly infiltrate his 2016 campaign “for political purposes.” Then he issued a “demand” that the FBI investigate the spying — resulting in the Justice Department sharing portions of the FBI investigation with Trump’s allies in Congress.

Trump blamed the entire Mueller investigation on a conspiratorial “deep state” intent on removing him from office. He used pardons to demonstrate to those already being investigated that they shouldn’t cooperate because he can pardon them, too, and then bragged to reporters that he is considering 3,000 more pardons — thereby anointing himself the judge of what is fair, rather than the judicial branch.

He claimed he has the absolute right to pardon himself and can thereby immunize himself from any outcome; and asserted he has the power under the Constitution to end the investigation whenever he wants.

The crux of America’s current constitutional crisis is this: Our system of government was designed to constrain power, but Trump doesn’t want to be constrained.

Our system was conceived as a means of promoting the public interest, but Trump wants to promote only his own interest.

Our system was organized to bind presidents to the Constitution, but Trump doesn’t want to be bound by anything.

The crisis will therefore worsen as long as Trump can get away with it. An unconstrained megalomaniac becomes only more maniacal. He will fill whatever political void exists with his unbridled ego.

The only legal way to constrain Trump is to vote for a Congress, this November, that will stand up to him. And then, in November 2020, vote him and his regime out of office.

If he refuses to accept the results of that election, as he threatened to do if he lost the 2016 election, he will have to be forcefully removed from office.

Friends, we are no longer trying to avert a constitutional crisis. We are living one. The question is how to stop it from destroying what’s left of our democracy.