Conservatives' anti-immigration fervor is political: They think keeping America white will save them

For right-wing commentators like Ann Coulter and her ilk, it's no secret: They fear more Latino voters 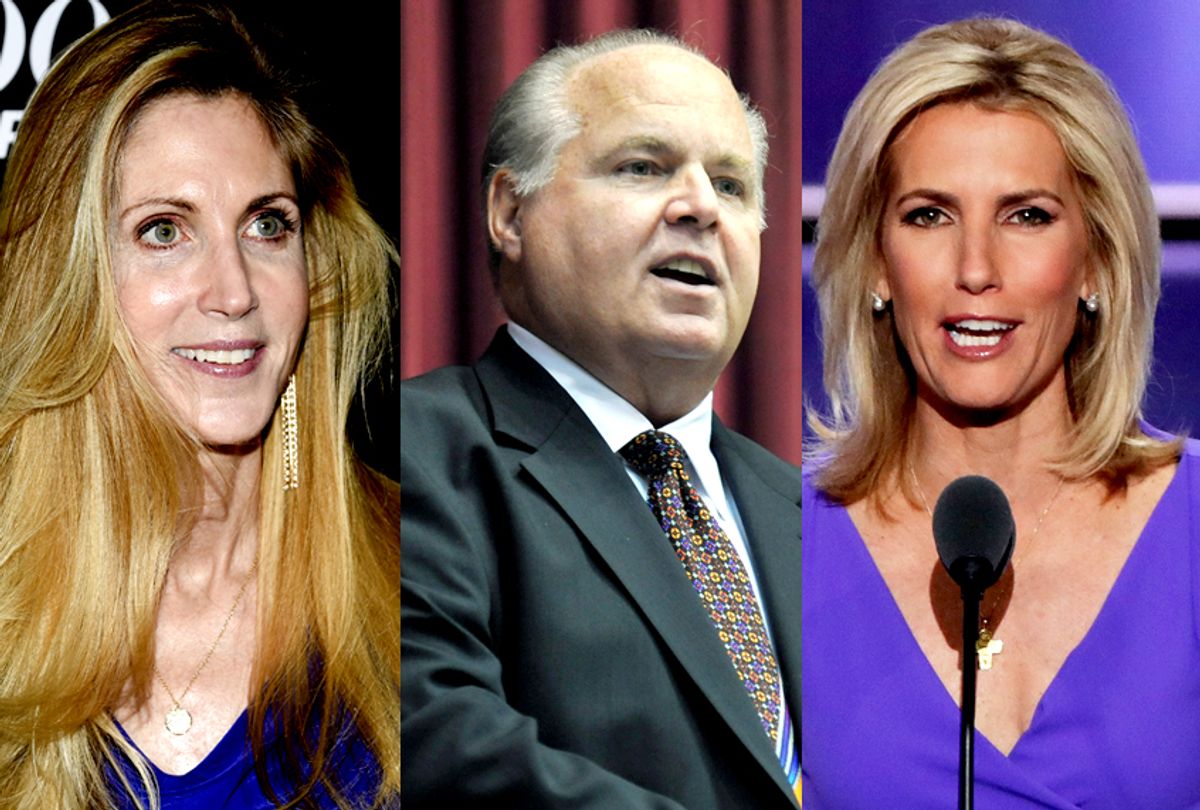 On Monday, in a courtroom in Wichita, a federal judge told Kansas Secretary of State Kris Kobach that he had so blatantly violated federal discovery rules in a case he argued, defending a law requiring voters to prove their citizenship, that she ordered Kobach -- a former Department of Justice official under George W. Bush -- to take remedial legal courses. She also ruled against the law itself, saying there was no evidence it was necessary.

Kobach is best known for writing the "show me your papers" law in Arizona that was also struck down in federal court. He also headed up the ill-fated Presidential Advisory Commission on Election Integrity, which was disbanded after many states balked at Kobach's demand that they turn over their confidential voter rolls to the federal government. He had very big plans:

Kobach is currently running for governor of Kansas, and the crusade to curtail immigration and voting rights will continue no matter how his checkered political career turns out. This is now a central organizing principle of the Republican party.

Donald Trump's administration has the most extreme immigration policy in a century. Among his first acts as president was his theatrical Muslim ban. He's beefed up the border patrol and ICE and told them all to "take off the gloves." He put one of the most anti-immigration politicians in the country in charge of the Justice Department, and they are systematically deporting people, even those who have been here for 50 years. Trump backed out of a deal to legalize the DACA recipients at the last minute. Now they are separating children from their parents at the border and putting them into detention camps in order to "deter" Latino immigrants, even those who are seeking asylum from the rampant violence in their home countries.

It's tempting to chalk all this up to simple Republican racism and nativism. That is certainly what fuels the emotion on this issue on the right. Conservative media pounds the message that "the illegals" are all on welfare (which isn't true) and are ruining the culture with taco trucks on every corner. (If only.) But that isn't the whole story.

Back in 2014, when the wave of unaccompanied minors from Central American came to the border, Laura Ingraham led the charge against those kids:

She ranted day after day about these children, claiming that the government was "trafficking illegal immigrants from one part of the country to another part of the country to further erode American wages and further forward their goal of ultimate amnesty and changing the electoral and cultural landscape of the United States forever."

Note that Ingraham said "electoral" landscape. We can see that Trump and his lieutenants see this latest border crisis as an opportunity to get their base fired up and get out to the polls in November. But movement conservatives have a long-term strategy in mind that goes way beyond the midterms and even Trump. That's why cynical politicians and media stars have been pushing this issue so hard for the last few years.

They realized somewhere along the line that the fundamental xenophobia of the GOP base would make it very difficult to form any sort of governing majority that included Latinos, the fastest growing ethnic group in the country. So they decided their future prospects would be better served by suppressing the Latino vote with spurious accusations of voter fraud and demagoguery about foreigners more generally, in an effort to force the government to curb immigration overall. Anti-immigrant groups like VDARE have made the argument explicit, saying Democrats favor immigration because it will give them an electoral advantage.

Back in August of 2015, Rush Limbaugh endorsed Trump's hardcore immigration position, saying that "everybody knows that [bipartisan immigration reform] is an immigration plan that is going to result in millions more registered Democrats." He even got a shout-out from the big guy himself that same day:

Limbaugh is a bit cagier these days, saying that he'd support DACA recipients getting a path to citizenship as long as they aren't given the vote for 12 to 15 years.

Right-wing radio host Dennis Prager made a similar case this year in a piece laying out three reasons the left supports immigration. The first of these:

The Deferred Action for Childhood Arrivals program, chain migration, sanctuary cities, and citizenship for immigrants living in the country illegally will give the Left political power. An estimated 70 to 80 percent of Latin American immigrants will vote Democratic. So with enough new voters from Latin America alone, the Democrats would essentially be assured the presidency and Congress for decades.

(If you're wondering: Reason two is because they are Marxists and reason three is that they want to feel good about themselves.)

The ruling right-wing diva of anti-immigrant fervor is of course Ann Coulter. She has been ranting even more than usual these days, telling Breitbart that nobody should believe the "actor children" at the border, citing some articles from 2011 about refugees embellishing their stories to get asylum. Coulter's influence on the GOP on this issue can't be overstated -- her book "Adios America" was clearly a major influence on Trump's agenda.

You may recall that Coulter called Trump's most notorious immigration speech during the campaign "the greatest political document since the Magna Carta." It was later revealed that she and Stephen Miller had written it. There are no limits to how low she will go in demeaning and degrading immigrants, but she too has stated clearly what the real issue is. At CPAC in 2014, she put it this way:

Amnesty goes through, and the Democrats have 30 million new voters. I just don’t think Republicans have an obligation to forgive law-breaking just because the Democrats need another 30 million voters.

The nativism we are seeing play out right now is cruel and inhumane. It's born of an ugly strain of white nationalism that forms the core of the Republican Party under Trump. But the conservative movement is still working feverishly on their own projects, using Trump and his demagoguery to serve their long-term goals. They know that keeping Latinos from voting and shutting down immigration, both legal and illegal, is necessary to their political survival as a movement and a party.

This time they may have underestimated how the rest of America feels about seeing small children ripped away from their families for cheap political purposes. Let's hope so, anyway.