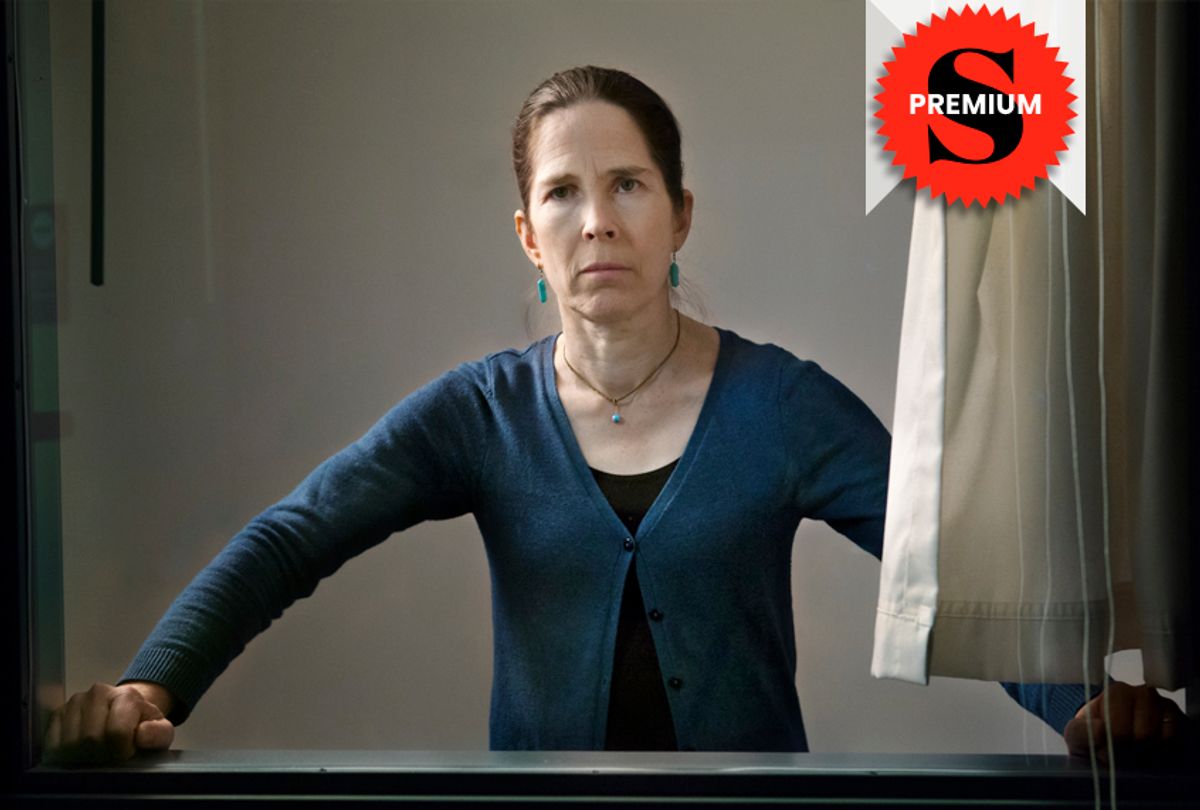 A still from "Bedside Manner"
--

The documentary “Bedside Manner” pulls the curtain back on the doctor-patient relationship — a dynamic that can be so fraught with frustration and miscommunication — by portraying medical school simulations in which students interact with actors in role playing exercises.

You can watch the full documentary "Bedside Manner"  on Salon Premium, our new ad-free, content-rich app. Here's how.

Director Corinne Botz talked to Salon about how her film “Bedside Manner” takes us inside the simulations and puts us in the place of both the doctors and the patient-actors.

I was fascinated when I learned about the slightly surreal profession of medical acting. I saw the Standardized Patient performances as a way to ask questions about interactions between doctors and patients, and to explore larger themes in my work, including issues of empathy and the perception of reality.

There is an uncomfortable intersection of theater, illness and photography that I wanted to highlight in “Bedside Manner.” Medicine is very theatrical and photographs help create an idea of an illness in the public mind. I constructed the film in a manner that references how the camera has been used to represent and construct medical relationships. For instance, in the first scene of my film I reverse the medical gaze from the patient onto the student-doctors.

Can you lay out what patient simulations are and how they're used?

Standardized Patients (SPs) are trained to portray patients in order to help medical students improve their diagnostic skills and bedside manner. Most of the standardized patients that I met in New York were professional actors, but they might have other day jobs or be retirees. Each follows a script, and is taught how to convincingly feign symptoms. The lessons require everyone play their part to the fullest, as if the patient really is ill.

The important thing about simulation is that imagination, or suspension of disbelief, is required. SP encounters are filmed and evaluated by medical professors who observe the interaction of student and medical actor. Following the encounter, SPs provide feedback to the students about their communication and interpersonal skills through a survey or debrief. It’s very beneficial for medical students and it’s become a standard part of all medical school training.

Do you have any personal relationship to the material you could discuss?

When I was younger, I was often sick with asthma and I stayed home in bed dictating stories to my mother, drawing and observing situations outside the window. I’ve always had a strong sense of my own mortality and an interest in the sick role. My medical experiences also resulted in a general distrust of doctors. I was drawn to the role reversal in the SP simulations and how the medical actor snaps out of character at the end of the scenario and provides feedback to the student, thus undermining the idea of a passive patient and giving agency to the patient’s experience.

How did making the film impact your perspective on the doctor-patient relationship?

We are all patients at one point or another, yet medical practices remain largely opaque to the general public, and despite their significance we often take exchanges with our physician for granted. I was drawn to the moments when the student doctors revealed their vulnerability. Making the film, I was able to see the humanity on the other side of the white coat and it helped to demystify medical encounters. This was useful to me as an anxious patient. My film’s reflections on empathy prompt viewers to think not only about the burden placed on patients to act well, but also what doctors feel as they struggle to live up to patients’ expectations of authority.

Did the subjects of the film see it? If so, what feedback have they given you?

The main subject, Dr. Alice Flaherty, was very involved throughout the process and gave me copious notes in response to various edits. She really likes the film because it isn’t a straight documentary and brings ambiguity into the medical realm, which the medical profession tries to eliminate. In addition to art galleries and film festivals, I’ve shown the film at some medical and academic conferences. We are hoping to do grant rounds and bring the film more into the world of doctors.

Dr. Flaherty is a great character. How did her enlightening candor influence the direction of the film?

Initially, the film was going to be more generally about standardized patients, but since Alice is so compelling she took on a more central role. There was also a moment partway through when I was concerned the film was too ambiguous and I wanted to make sure the seriousness of illness was conveyed. This is when I asked Alice to discuss the death of her premature twins and how the lack of empathy displayed by her doctor changed the way she practices medicine. This two-way mirror interview ended up structuring the entire film.

I’m working on a film and still photography project that explores subjective experiences of motherhood through lactation rooms. These usually unseen spaces offer insight into the maternal body’s status in the workplace, and the politics of care. Here’s my website: www.corinnebotz.com

Watch the delicate act of empathy at play between doctors, actors, patients and ourselves, the audience, in “Bedside Manner,” streaming on Salon Premium, our new ad-free, content-rich app.