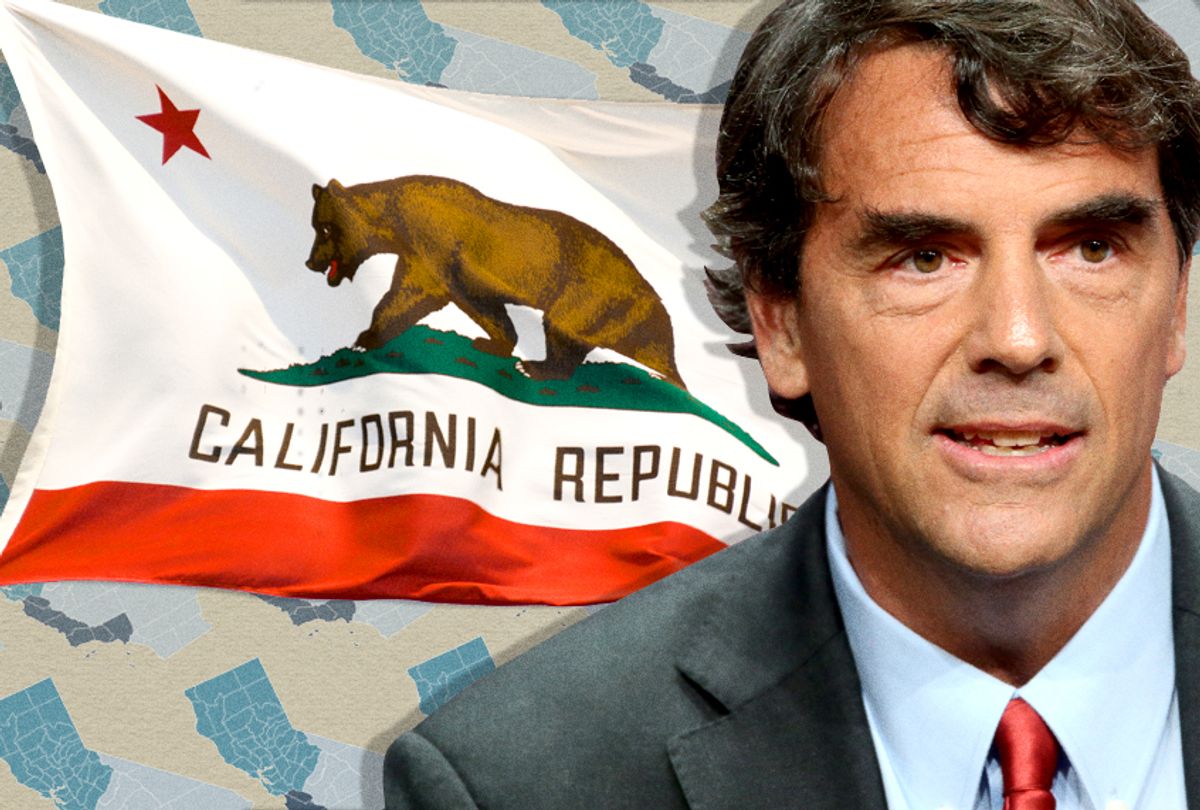 In 2014, serial venture capitalist Tim Draper launched a new enterprise: a campaign to divide the state of California into six separate states. Two years later, the initiative — known as Six Californias — failed to qualify as a 2016 ballot measure.

That didn't stop Draper’s determination to split up California. Instead, he did what any tenacious Silicon Valley tycoon would do: refine his vision, in this case, by turning six into three. The simplification of the math led to an early triumph.

Thanks to Draper, Californians will have the chance in November to vote on whether or not they want California divided into three separate states — Northern California, Southern California and California. The measure, being marketed as "Cal 3," received over 402,468 valid signatures to secure itself a place on the ballot.

If it were to pass, the measure would have to receive approval from California Legislature and the United States Congress. It would not be an easy journey, and many experts are already critical of it, but if the 2016 presidential election has taught America anything, it is that rich people are pretty good at getting their way in politics.

“The obstacles would be large,” historian Michael Kazin, co-editor of Dissent magazine and a professor at Georgetown University, told Salon in an email. “The only way this would happen, I think, is if the referendum wins a huge majority and if neither national party thinks it would gain an advantage over the other​. Neither of those is likely.”

Despite its low probability of passing, the proposal, and the reasons why rich people seem so interested in breaking up the Golden State, are worth examining in closer detail. Indeed, the Three Californias proposal seems symptomatic of the sense of entitlement innate to many high-profile Silicon Valley leaders, as I have previously written about in the context of sexual harassment in the tech industry. Draper epitomizes the financier who thinks his political ideas are innately superior and that he is above the law.

Experts I spoke with agreed.

“What this shows is that with relatively low signature requirements and a few million dollars, virtually any proposal can get onto the ballot -- especially if it's symbolic and taps into general public disgruntlement with government,” Renée Van Vechten, a political scientist at the University of Redlands, told Salon in an email. “How such a break-up would proceed is anyone's guess, so imagining who would benefit specifically is a fair bit of fiction.”

I asked Van Vechten if the proposal would benefit the rich; she said yes, however, anyone who was politically well-organized would benefit — a category that generally includes the rich.

“The organized tend to be well-funded and heavily-resourced, meaning they have disproportionate amounts of disposable time, money, knowledge, ownership of or influence over large parts of the economy, understanding of government processes, etcetera... typically these are business interests, labor unions, and elites who have the most to lose through a disruption to the status quo and will go into protection mode if their livelihoods or interests are threatened,” she said. “Those entities can and do use government processes to their advantage, or they hire persuaders (lobbyists) who can do it for them.”

Draper has the resources for this initiative. He donated $1 million, chump change for someone with an estimated $1 billion net worth. He comes from Silicon Valley money and royalty; Fortune magazine called the Drapers “the industry’s first family.” Draper is a cryptocurrency enthusiast; he reportedly won an auction by the US Marshals of nearly 30,000 Bitcoins, which were seized from the online black market Silk Road. He is an investor in Skype and Tesla. He was also an investor in the infamously perjurious biotech startup Theranos, and recently publicly defended its CEO Elizabeth Holmes — who was recently indicted on fraud charges — saying she did “a great job.”

"[Cal 3] is an idea that came from a Silicon Valley entrepreneur, [and] often times these people have libertarian ideas of getting rid of the government and starting from scratch,” Nancy Hudspeth, an assistant professor of political science and public administration at California State University, Stanislaus told Salon. “One of the things wealthy people are looking at is a way to reduce taxes.”

Yet Cal 3 claims to be a nonpartisan movement.

"We see great enthusiasm from every walk of life and every part of California," Peggy Grande, a spokesperson from Cal 3, told Salon. "This is not about Tim Draper, it is about the people of California wanting to say we want a different direction for the state."

The state of California indeed has some of the highest taxes in the nation, which pay for the state's relatively robust social welfare state. Like any progressive taxation plan, the rich do (and should) pay more.

“People with higher incomes pay a lot more money, and some of them may be tempted to leave,” California Governor Jerry Brown once said.

Supporters of the measure, according to the website, are in essence advocating for a "better California", arguing that the state is too big to govern. California is the most populous U.S. state, with an estimated population of 40 million people.

“This isn’t about politics — this is about sustainable solutions to intractable issues that impact Californians every day — like our local schools, infrastructure and government responsiveness,” the measure’s website states. It also cites rankings from U.S. News & World Report and McKinsey’s “Leading States Index” where California ranks low in various brackets such as K-12 education and quality of life.

Yet experts say supporters are uneducated on the issues, and perhaps blinded by power and money.

“These people think they know what would be best for California, but the state has actually over the years delegated a lot of their state functions to the county level,” Hudspeth said.

Supporters also might point to the argument that dividing the state into three would add more Democrats to the Senate, since California is mostly a blue state.

“The idea of having six senators from California would be reprehensible to Congress,” she said.

Ultimately, Van Vechten said, there might not be much to worry about — as such a split would be the first division of a state since the founding of West Virginia in 1863.

“Breaking up and reconstituting California into three separate parts would be more complicated than Brexit,” Van Vechten said.