Donald Trump backs down, for now: But this political horror show isn't over

This whole nightmare was nothing more than ugly political theater. But for once, Trump misjudged the public mood 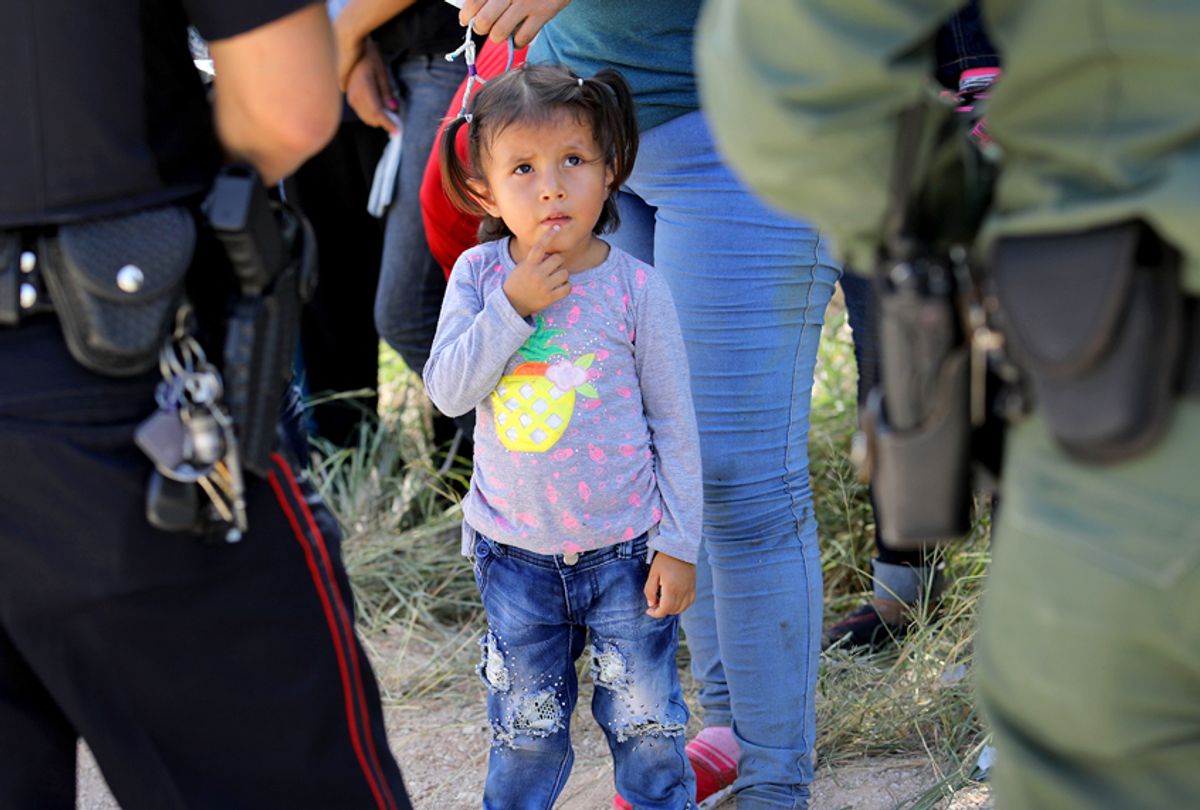 A Mission Police Dept. officer and a U.S. Border Patrol agent watch over a group of Central American asylum seekers before taking them into custody near McAllen, Texas. (Getty/John Moore)
--

A few days ago, fresh from what he thought was a triumphant summit with North Korean dictator Kim Jong Un, President Trump took a stroll on the White House lawn and talked to reporters about the family separation program at the border. This is what he said:

You will note that when asked if he would take executive action, he declared,"You can't do it through an executive order."

We knew that was a lie, since his administration had called for all people crossing the border at anything but designated ports of entry to be arrested, requiring their children to be taken from them. But he said it repeatedly. Recall this from Monday: 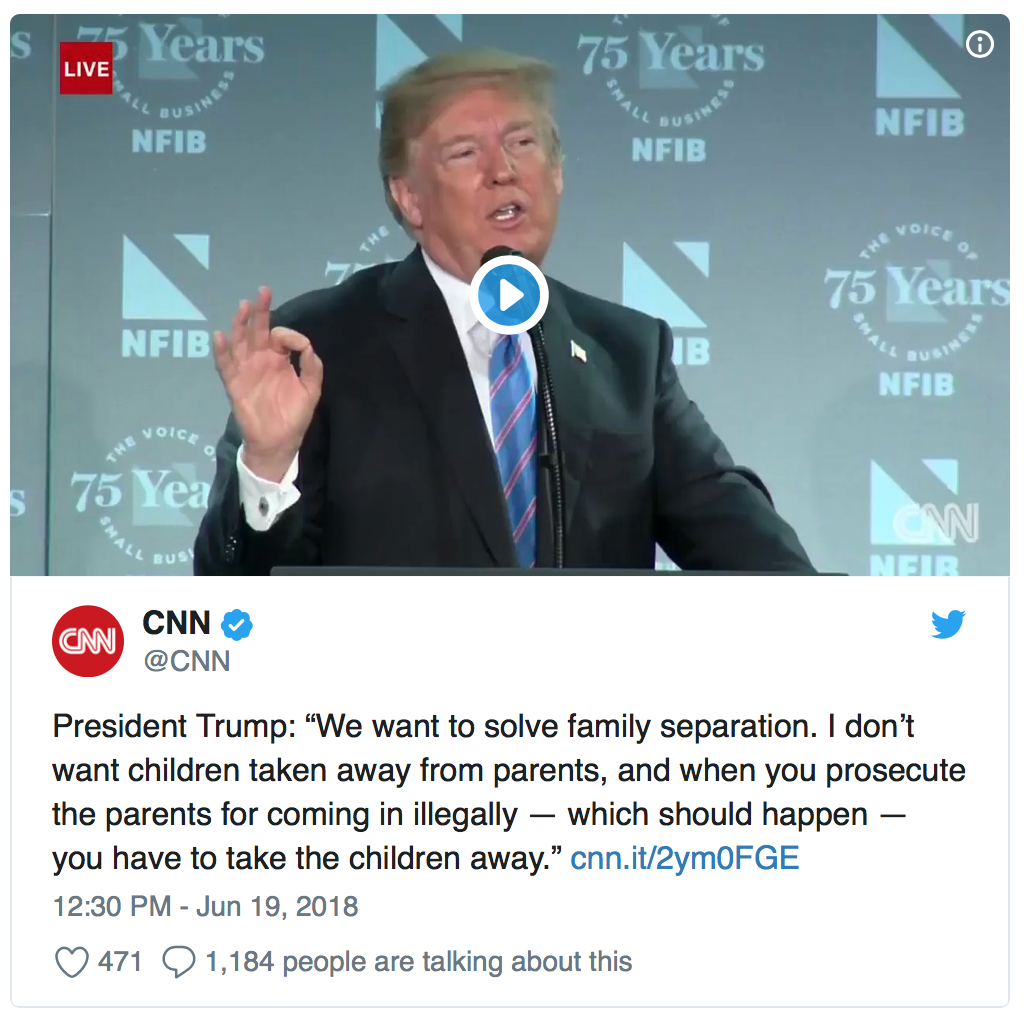 Under pressure from Republicans, on Wednesday Trump did what he said could not be done. He signed an executive order requiring that families be kept together and proclaimed himself a hero for saving all the children, as his minions Kirstjen Nielsen and Mike Pence stood behind him like a couple of potted plants. The truth is that this executive order was just another PR stunt. He could have just told Nielsen and Jeff Sessions to do it.

The devil is in the details. No one is entirely sure how the new policy will be implemented, since Trump has not rescinded the "zero-tolerance" policy that requires all these people to be prosecuted, and there is little current capacity for housing all these families. But apparently, they don't intend to hold them together for long:

The plan seems to be to detain the families for 20 days, after which Trump will say they have to be separated again because the court made him do it. That would mean we are back to square one, with Trump demanding that Democrats fork over $25 billion for the wall and provide billions more for border security or the kids will get it.

It's possible that the courts will step in and find another reason to make him keep these families together. And the politics of this are fluid, so none of this may come to pass. But it looks as though the administration either planned this to unfold in stages or is simply moving to plan B after the outcry. The only thing that matters to Trump is being able to say he built his wall. The rest of the anti-immigrant right wants to remove as many immigrants from American soil as they can, by any means necessary, for reasons I spelled out earlier this week.

To that end, Trump's shock troops are deporting law-abiding undocumented workers and searching out longtime legal residents for crimes committed in the distant past. They're using laws that have only been used on war criminals in the past, to rescind citizenship from naturalized Americans. (During his campaign, Trump also said he supported ending birthright citizenship because he believes it is a "magnet for illegal immigration.")

All this has created a crisis at the border where none exists -- illegal border crossings in 2017 were actually at a 46-year low. And while Trump engages in his usual fear-mongering in places like Duluth, Minnesota, reports from the border towns in Texas, Arizona and California are that this influx of families seeking asylum is actually quite modest.

They are almost all seeking asylum for the first time:

Before the administration adopted its zero-tolerance policy, these families would have been allowed to come into the country and apply for asylum. Contrary to right-wing propaganda, nearly all of them do come back for their hearings at a later date. They don't want to be undocumented. They want to be safe.

These refugees' lives are hell in their home countries because those countries are in the grips of criminal gangs and corrupt police. Women, girls and LGBT people are particular targets for violence and rape, with boys being forcibly conscripted into gangs or killed. Michael O'Hare described these countries in this op-ed in the San Francisco Chronicle in terms that explain why Trump has no empathy for any of these people:

On one side are the gang leaders and corrupt, murderous police in Honduras, Guatemala and El Salvador. These guys are the real thing, cut from the same cloth as Trump’s better-known heroes Vladimir Putin, Kim Jong Un and Rodrigo Duterte. They kill, imprison, dismember and rape as a conscious managerial/motivational technique. They are about making money and making people fear them, just like Trump.

That may sound extreme, but consider this quote from a Trump associate given to Gabriel Sherman in Vanity Fair about White House immigration adviser Stephen Miller:

Stephen actually enjoys seeing those pictures at the border. He’s a twisted guy, the way he was raised and picked on. There’s always been a way he’s gone about this. He’s Waffen-SS.

The journey from these countries to the American border is just as dangerous, with thugs and criminals all along the way. (One national security professional characterized it as so dangerous he would rather backpack across Syria than do it himself.) There are plenty more gathered in the border towns where these people are supposed to wait their turn for a chance to request asylum on the other side of the border. That danger is a big reason why many of them would rather just cross at other places and get arrested.

They are far more afraid of what they've left behind them than what lies ahead. Even risking losing their children to this cold and heartless bureaucracy is preferable to losing them to violence and death.

If that isn't depressing enough, the Trump administration is ending the Temporary Protected Status program — a protection given in the wake of major humanitarian disasters  — to tens of thousands of people, many of whom have lived in the U.S. for decades. They will all presumably be deported as well.

On MSNBC on Wednesday, Chris Hayes explained why the perception that this cruelty and inhumanity is a "deterrent" leading us down a dark path:

What that ends up being is you get into a kind of bidding war with the cartels about who can be more monstrous. . . . You end up having to do monstrous things so that the judgment tips in your favor.

I have little doubt that Trump, Sessions, Miller and the rest are happy to keep upping the ante. Trump has always been in favor of the crudest violence as a means of getting his way. But the horrified reaction of the American people to this odious family separation policy has shown that there may be limits to what this country will put up with after all. It isn't over yet, but today there is reason to hope that Trump will end up losing this one.