Remembering Koko, the gorilla who taught us what it means to be human

The gentle gorilla, fluent in sign language, changed how humans consider our place in nature 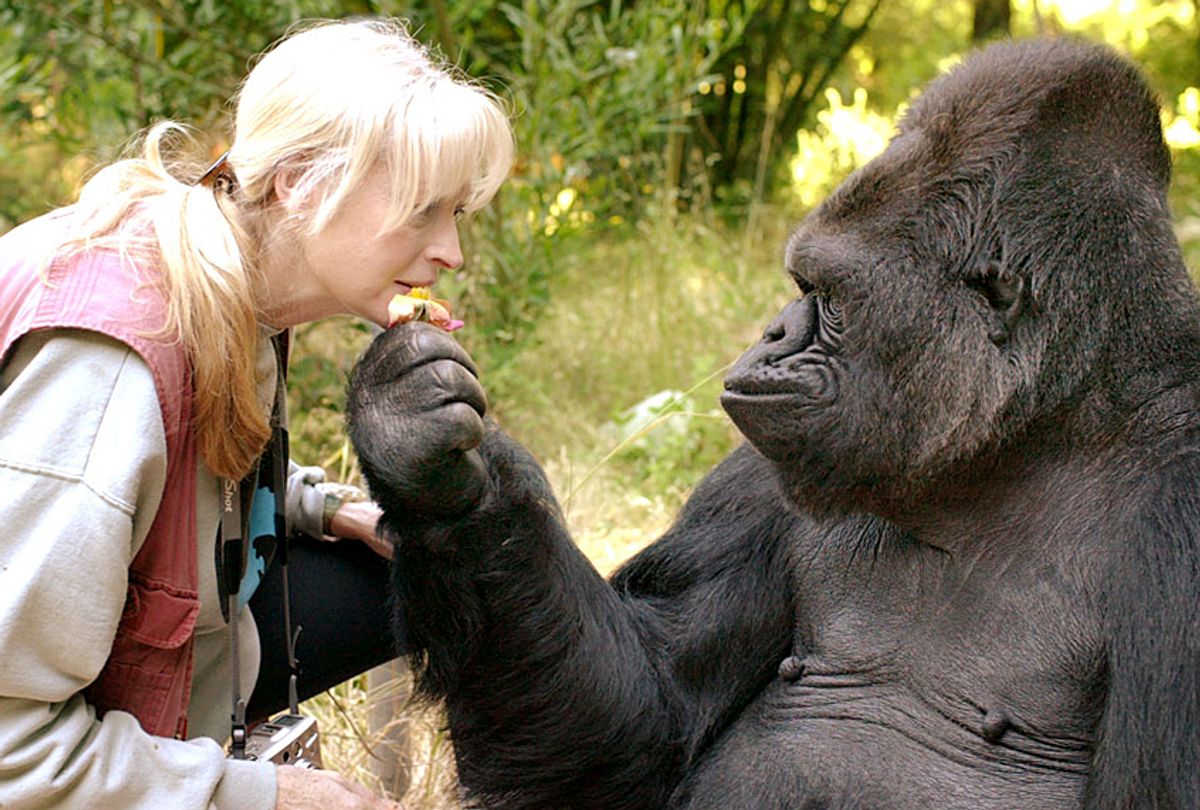 Koko and her Lifelong Teacher and Friend, Dr. Penny Patterson (The Gorilla Foundation)
--

Humans around the world are mourning the death of 46-year-old Koko, the western lowland gorilla who could communicate using a variant of American Sign Language optimized for the anatomy of a gorilla's hands.

Koko rose to world fame quickly in the mid-seventies when word spread that she had learned more than 170 words in American Sign Language, after three years of training — becoming the world’s first “talking” gorilla. By the end of Koko’s life, she could understand 2,000 words and “speak” 1,000. However, she will be remembered for more than just her intellect. Indeed, by communicating her feelings directly, Koko showed humanity that love, compassion, empathy, joy and grief transcend species.

“Koko touched the lives of millions as an ambassador for all gorillas and an icon for interspecies communication and empathy,” the Gorilla Foundation said in a statement. “She was beloved and will be deeply missed.”

Koko reportedly passed away peacefully in her sleep. In the wild, gorillas are estimated to live until they are around 35 years old. In captivity, they can live longer. The oldest known female gorilla, Colo, died at 60 years old at the Columbus Zoo and Aquarium.

Koko was born on July 4, 1971, in the San Francisco Zoo. At six months old, she became ill and had to be separated from her biological mother. Koko’s fate could have never been predicted from the beginning, though. Francine “Penny” Patterson, Koko’s “mother,” met her when she was just a baby in the San Francisco Zoo. At the time in 1971, Patterson was a 24-year-old graduate student at Stanford University, who crossed paths with Koko while working on a Ph.D. project to see if a gorilla could speak sign language. Patterson was working on her doctorate in psychology with a focus on comparative cognitive skills among hominoids.

What was meant to be a four-year experiment turned into a lifelong mother-daughter relationship. In the early days, the two of them co-habitated in a “house trailer” at the edge of Stanford University's campus. As the New York Times described in a 1975 profile: “She [Koko] has her room, containing a large cage in which she can be locked, and she is allowed almost full‐time access to the adjacent kitchen. She is allowed limited access to a storage room, Miss Patterson's bedroom and the bathroom.”

In 1979, Koko and The Gorilla Foundation moved to the Santa Cruz Mountains south of San Jose. Koko’s life was peaceful, compared to that of a gorilla in the wild — yet still fraught with tragedy, in its own way. Koko wanted to be a mother, but ultimately never found the right partner to give her a baby.

First there was Michael, a silverback gorilla whose parents were killed when he was a baby in Cameroon, West Africa. He  became part of Koko and Patterson's family in 1976. According to Koko.org, Koko and Michael had a sibling-like relationship since they grew up together. Michael passed away in 2000.

When Koko started to sign “mother” and “baby,” Patterson and Koko’s caretakers made it a priority to find her a male gorilla. Employing a gorilla version of Tinder, Koko was shown videos of male gorillas that needed to be placed. She would give a “thumbs up” or “thumbs down” for the ones she was “attracted” to, according to Patterson.

“If she liked the gorilla she would stare at the screen and ask us to play it again and again,” by kissing the screen or signing “love,” Patterson said in an interview.

Koko's first choice was not available, but Ndume was — Koko's second choice, from the Cincinnati Zoo. When Koko first met Ndume, she instantly signed “Koko love” and “hurry.” She reportedly wanted to get close to him, but he was a little scared of her. They coexisted nicely, but ultimately there was no mating bond. Patterson later said the environment they were in could have been a factor; Koko was not in the ideal setting to relax and mate with him. However, despite there being no mating-attraction, the two became great friends and showed humans that love takes all different kinds of forms — even in the gorilla world.

Koko still found ways to display her nurturing nature. She famously loved cats, something evident from an early age. The most memorable of her kittens was All Ball, who was tragically killed by a car. When Patterson delivered the news about All Ball’s death, Koko displayed grief and cried at night. She signed “sad” and “bad,” once again, illustrating that humans that they aren’t alone in experiencing grief.

Famously, Koko exemplified what it meant to give a real gorilla hug. Her reputation for being kind and loving led her to hobnob with A-list celebrities such as Robin Williams, Betty White and Fred Rogers. When Williams died in 2014, Koko grieved with the rest of the world; Patterson described her in an interview as “somber.” Indeed, Koko and Robin Williams shared a special bond. Williams was cited as the first person to make Koko happy after Michael the gorilla's death. Williams described his first date with Koko as “mind-altering.”

“We shared something extraordinary, laughter,” he said.

Throughout Koko’s life, skeptical academics tried to blow to proverbial whistle on the experiment, claiming Koko could never “talk.” However, I would argue her capability to communicate is irrelevant compared to what she symbolized. The core of humans' fascination with Koko was not merely her ability to "talk," but the amazement that lied in the universal experiences humans shared with her: Koko's creativity when she painted. Her grief after losing a friend. Her joy while opening gifts on her birthday. We live in a lonely universe, yet Koko showed humans that emotions on Earth are universal, and that we are not as alone as we might think.