How to talk to kids about transgender family members and friends 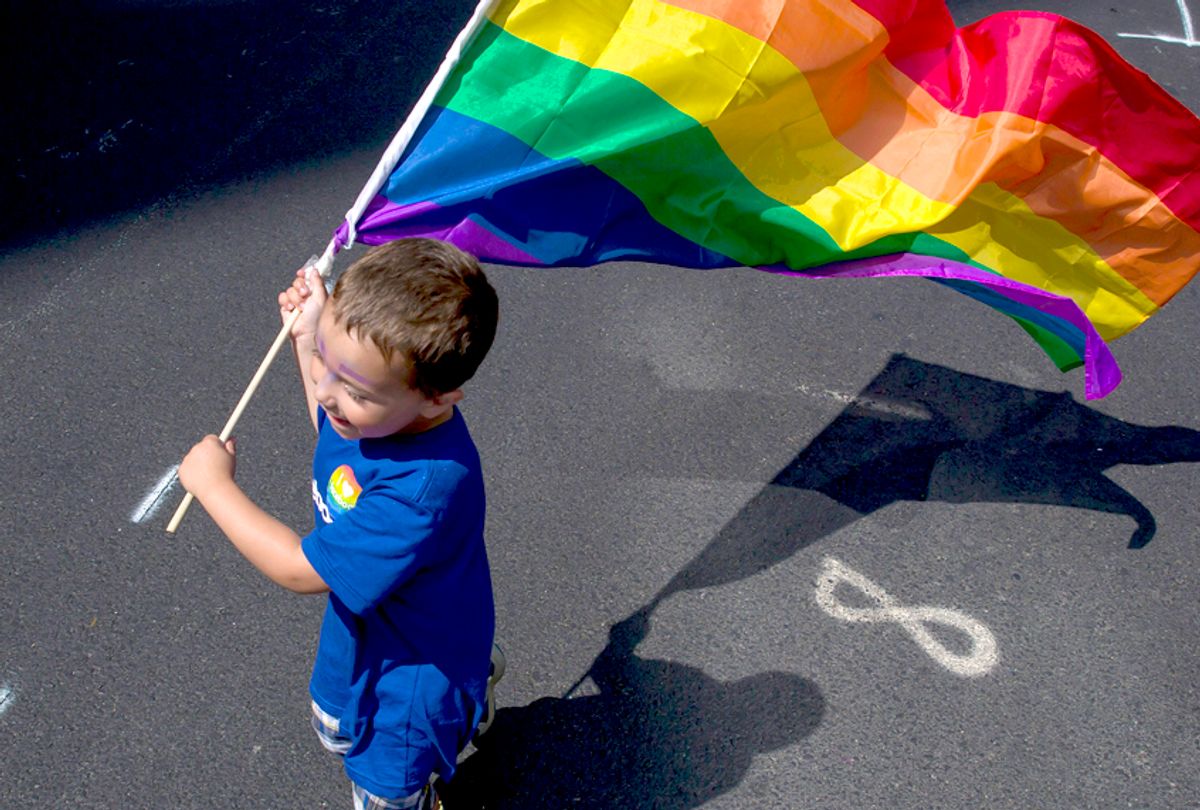 I was encouraged by Robin Marquis, the former national program director at COLAGE, to include a chapter on transgender people in "Rainbow Relatives," and I realize the importance of doing so. In recent years, I’ve heard other gay people make oppositional comments such as, “Who decided to add transgender to the gay community?” I’ve found their attitude a bit odd, because although transgender people are different from gay people in many ways, they do go through so many similar struggles such as identity issues, being different, discrimination, and trying to be accepted by others.

Kendall Evans is a transgender woman and a California licensed marriage and family therapist specializing in violence and abuse. I met her at a PFLAG meeting. She was there with her father and son. She said to the group, “I am not changing from being a man to being a woman, I am changing from living as a man to living as myself.” Her coming out and transitioning was a gradual process that began very late in life (her late fifties, in fact). She explained how she always felt different through her entire life and couldn’t quite place it. Although her son had been a little apprehensive about her transition at first, he is now very supportive and certainly enjoys the fact he got a whole new wardrobe out of it (all Kendall’s male clothes). Kendall believes that a gradual process of “coming out” as transgender is probably better for most people, although her father and son both had some solid indicators with her shopping habits. “After watching you shop, you’re a woman,” her father joked, referring to how long she took in the stores. But they had also noticed the gradual change in her preferences as well: Kendall’s wardrobe also became more and more feminine as time went by.

By the time she came out, Kendall’s son was in his late teens and already out of school, so they didn’t have to deal with any issues there. However, she still strongly encouraged him to read the PFLAG brochures about transgender people and the literature for the children of transgender parents. She said it helped him a lot. “It’s important for kids and adults to go out of their way to try to understand [each other], and going to family therapy was very helpful too,” Kendall explained.

Speaking with Kendall was as much of a learning experience as watching the documentaries and movies that taught me about transgendered people. For example, she told me that some people are bi-gender, depending on the day or time of day. In other words, some days they feel more like a man and some days more like a woman. These feelings can even shift through different parts of the same day as well.

She also told me about Lana Wachowski, the transgender codirector of "The Matrix" and "Cloud Atlas." Lana had received an HRC (Human Rights Campaign) award in the past, and her acceptance speech had a profound effect on Kendall. After our interview, I immediately went home and watched the speech online and found it extremely moving. Lana’s powerful message was that she was being awarded for “being herself,” saying, “This moment is fulfilling the cathartic arc of rejection to acceptance without ever integrating the pathology of a society who refuses to acknowledge the spectrum of gender in the exact same blind way they refuse to see a spectrum of race or sexuality.” Lana’s sister Lilly (formally Andrew), who works with Lana cowriting and codirecting many films, is also a trans woman, which makes their professional partnership — as well as their familial relationship — pretty rare.

Kendall also told me about a recent health scare that required her son to call an ambulance for her. He went along to the hospital and made sure they got all the pronouns right on the paperwork. Anywhere it said “he,” her son made sure it was changed to “she.” Apparently, he did such a thorough job that a short time later, Kendall received a letter in the mail from their insurance company, informing her that she was overdue for her Pap smear.

I spoke to a transgender woman in Arizona — we’ll call her Phoenix — about how she deals with the questions kids ask about transitioning. Her advice was, “The shorter the answers, the better. Don’t bombard them with too much information. Let them know they can ask more questions later if they want to. Not a whole lot you need to tell.” Phoenix also said that her own nieces and nephews had asked things like, “Are you going to have an operation?” Her answer was, “Maybe.” They also asked other questions like, “Are we still gonna be together? What do I call you now? What does this mean for your marriage? Are you gonna dress like a woman; are you going to change your name?” These answers will vary on the individual but these are some questions you can expect.

Phoenix commented on how much easier it is for children to accept such information as opposed to some adults. She theorized that grown-ups often can’t fathom different gender identities, or they are offended, or think they have certain moral standings. But with the younger generation, it is a nonissue. She also said that the many online support systems, through social media and groups like PFLAG, make things a lot easier now as well. People can realize they are not alone and that there are plenty of others going through the same things. Phoenix also does some work at PFLAG and told me how just a week prior to our interview, a mother had come in very distraught after learning that her child was transgender. Later, the woman left in high spirits, still trying to understand, but knowing that her child would be fine.

At another PFLAG meeting I attended, there were two guest speakers who were also a couple. Mike/Michelle identifies as transgender and Robin was bisexual. Although they hadn’t met until they were in their sixties, they seemed to be soul mates. A few weeks after the meeting, I interviewed Mike/Michelle and I learned that she hadn’t accepted her transgender identity until she was in her fifties. At her age, and in her physical condition, full physical transition was not deemed appropriate. There are a lot of transgender folks who, due to age/physical condition or financial matters, do not fully transition. She uses the name Mike/Michelle now in selected circles to generate questions, which allows others to see who a transgender person may be. In turn, that creates more “safe space” in the world for other transgender folks. She says, “We all have to do what we can to eliminate the killing of transgender people.”

Mike/Michelle had previously been married, and although she and her wife did divorce, it was amicable and so was their approach to dealing with their children, who were both in their late teens at the time. They sat down with their son and daughter for a family meeting and Mike/Michelle started explaining about transgender people. But before she could say that she was transgender, the two kids said, “Dad, we already know.”

Mike/Michelle was surprised and asked, “How did you know?” The son explained that once when he had been at home visiting from college, he needed to borrow a pair of shoes and went into his father’s closet. He found a large woman’s shoe as well as women’s clothes that he knew wouldn’t fit his mother. Her daughter said that she had used her dad’s computer once and saw all the bookmarks about transgender topics. At that point, Mike/Michelle didn’t have much more to say to them besides: “If you want to learn more, you can come out with me when I am out as Michelle.”

The son hesitated and said, “Let me think about it,” but the daughter accepted the invite and asked, “When?” She ended up having a blast going with Mike/Michelle to drag shows where the DJ was also transgender. Although the son was a little uncomfortable at first, he came around fairly quickly and then also accompanied Mike/Michelle to various places in the transgender community. Mike/Michelle told an interesting story about one night when they were at the Queen Mary nightclub, where there were some male military personnel there dressed up as women. They were about to be sent to Iraq and explained their reason for going out that night by saying, “We don’t want to die without ever experiencing this.”

Now her children are grown, and Mike/Michelle has a twelve-year-old grandchild who is gender fluid (which means they do not identify as a fixed gender and prefer the pronoun “they”). The grandchild’s parents and Mike/Michelle waited until the grandchild was eleven to have Grandpa Mike come out as Grandma Michelle and explain it to them. Mike/Michelle is out to all of her partner Robin’s family, including Robin’s ten-year-old niece, who asked questions like, “Are you a boy or a girl?” To which Mike/Michelle responded, “Kind of both.” The niece simply said, “That’s interesting.” The niece has also seen her both as Mike and as Michelle and asked, “What is it like being Michelle?” Mike/Michelle answered, “It’s a lot of work.” Mike/Michelle also addressed people who struggle with accepting transgender people or question whether the lifestyle is right or wrong. Mike/Michelle said, “It’s just a characteristic, like a size 10 shoe. It just is, so live and let live.”