I hate cooking with my mom, but she can't make fried chicken to save her life, so that's what I make

If your mom is an awful cooking partner (like mine), find a recipe she can't participate in and hand her a cocktail 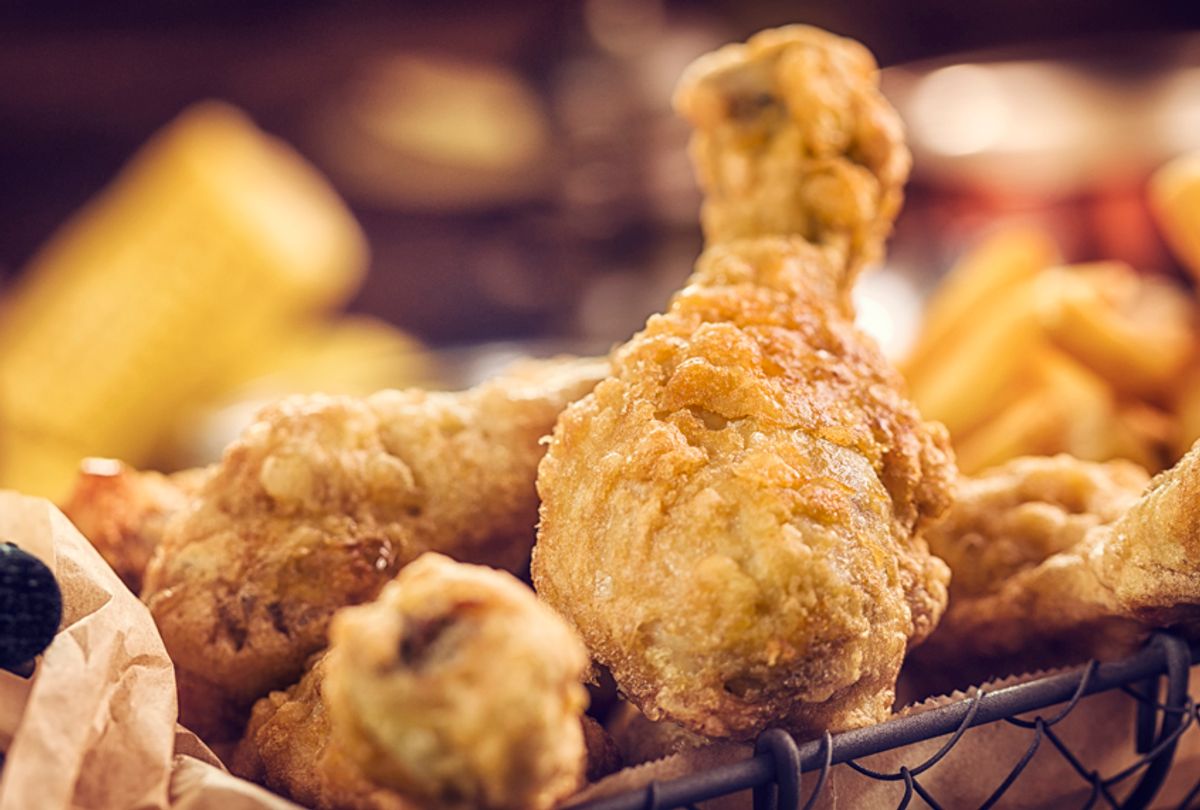 For years whenever my mother left her Manhattan apartment and came to visit me in Brooklyn (which she called the country) she'd arrive disheveled and completely rattled, as if the number 2 train was a Wild West stagecoach wresting her from the safe confines of the city and plunking her down amongst the savages. Falling through the door, she'd whisper, "Get me a drink, darling." Revived somewhat by a potent gin and tonic, she’d stare out across the low expanse longingly to the sun-blazed city so recently abandoned, and ask me what I intended to make her for dinner. It was at this point that I'd reach for my own bottle.

As children we merely bored her. As teenagers we bored her and frightened her. The problem now was, as adults, she had grown to like us, well, at least to need us, and that had totally thrown her for a loop. Which isn't to say she was ready to let her guard down. One of us, at any moment, could suddenly marry a banker and start talking nonstop about derivatives. So far my sisters and I had resisted that urge, which didn't leave her much to be bored by or critical of, except when we cooked. Her barrage of suggestions, her horror at technique, her scold would have me doubting my very existence, which was ridiculous because, empirically, I am a far better cook than she ever was. Every once in a while I would try to get her to back off, but she'd merely sniff and say she was only trying to help.

When she moved out to L.A. I can't tell you the freedom I felt cutting my onions into slices instead of dicing them, using butter for sautéing instead of oil, and peeling my garlic like it was a fragrant pearl rather than smashing it as if it were a cockroach scurrying across my cutting board.

Being a good daughter, I do drag myself out to the coast to visit my mother once a year. And, as we're not willing to just sit and stare at each other, I cook while she comments.

But this year I had a spark of inspiration. I would make something so far from my mother's own experience that there would be no toehold for her muttered asides. “Really? Is that the best way to knead that dough?" Or, “If you leave that a moment longer you're going to scorch it." Or, "You sure you know what you're doing? That much salt? You'll ruin it. But go ahead, see for yourself."

I told her that I was going to make fried chicken. Now I know fried chicken does not sound earth-shatteringly original, but my mother is a Cockney woman who migrated to Canada, where I was born. Fish and chips maybe. But fried chicken?

In fact, growing up I don't think I ever bit into a home-cooked hot crackling wing or thigh. There was Kentucky Fried Chicken, although in Quebec in those days it was called Scott's Villa de Poulet. Don't ask me why. Probably a franchise licensing issue. On very rare occasions when driving home from our country place, after a weekend filled with meals my mother cooked on a wood stove (which were scorched because my father tended to throw in a few more logs, creating a flame-up just at the moment her pork chops in mustard sauce required a simmer down), we would beg for a bucket of Scott's Villa's finest.

Mother would sneer as we tore into the vaguely unrecognizable pieces of chicken, and although she too partook, she claimed with each bite that all she tasted were chemicals.

I didn't even know you could make amazing fried chicken at home. I thought it was like Chinese food -- one of those things best left to superheated woks and industrial kitchens. It was my husband who first ventured into the realm of fried chicken. I remember coming home, and he had vats of oil bubbling away whose temperature had to be raised and lowered at precise moments.

The chicken was great but the method was far too involved for the sort of cook I am and, since I do 99.9 percent of the cooking in our house, and since I'm just competitive enough to want to see if I could best his first attempt, I had to figure out how to do it with a lot less fuss.

At first I went the buttermilk marinade route, but didn't like the texture it gave the chicken. I also tried cooking in high-heat oils, but then I would be in a panic turning the heat up or down trying to get an even boil. But eventually I hit on a version that suits my cooking temperament, which I would describe as a slapdash maniac with a decent palate.

With mother sitting in a chair in the middle of my sister's kitchen, I began to assemble all that I needed. She watched with a gimlet eye as I dumped copious amounts of spice into my flour. I could see her craning her neck, but without any first-hand knowledge, she was rendered mute. When I pulled out my two-day dry-brined chicken cut into what I guess you could call hacked in the Chinese style pieces, she was too confused to offer a critique.

An hour or so later I placed a platter piled high with perfectly cooked fried chicken on the table, along with a cabbage salad laced with French Feta cheese and bowls of honey in which slices of Serrano peppers had marinated through the afternoon.

My whole family dove in. And soon I heard what every cook wants to hear, the groan of pure pleasure. My mother, though, had yet to pick up a piece. I didn't blame her. After all, she had had no hand in its creation. Eventually, her hunger won out, and she begrudgingly grabbed a thigh. I can't swear I saw a slight smile, but I am willing myself to believe that I did.

Chicken: cut into 10 pieces, pat dry and heavily salt under the skin using Kosher or good sea salt (I like Maldon); leave uncovered in the fridge overnight or up to two days.

Stir in cayenne and paprika; the flour should definitely have a reddish hue. Then the garlic powder and adobo. Adjust for taste. Many people sneer at flavor enhancers, but this is fried chicken; no point in getting snobby.

Dip chicken in flour, then egg whites (I like just the whites; the chicken has a lighter feel and more of a crackle without the yolk) then flour again. Heat the oil. It's ready when you throw in a tiny edge of chicken skin and it quickly sizzles to the top. Cook in small batches until done, about 10 to 15 minutes per batch.

Keep warm on a wire rack in oven (200 degrees) until ready to serve.