Donald Trump's trade war bites back: One target could be his own business empire

Our allies are already imposing tariffs. Could the next step be targeted sanctions against Trump's business empire? 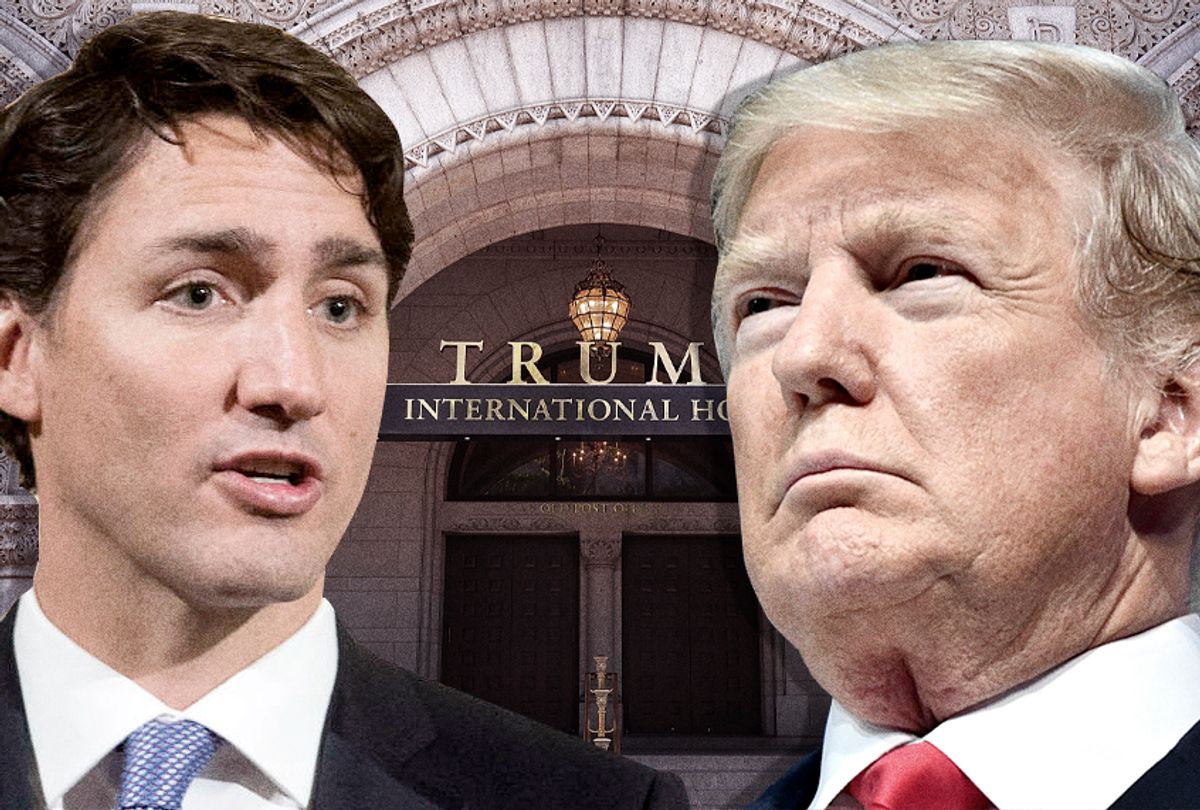 For the last several months, I’ve been idly speculating on my podcast about the possibility of the United States being hit with sanctions as a consequence of the harrowing monkey-with-a-machine-gun presidency of Donald Trump. It sounds outlandish, but these are outlandish times. Now, in addition to randomly disrupting the stability of American democracy, Trump has engaged in an effort to disrupt both friendly and “frenemy” nations as well.

Canada, a perennial ally and loyal trading partner, is currently being framed by Trump as somehow an evil empire, treating us “so unfairly,” in the whiner-in-chief's words, with their allegedly destructive trade dominance on this continent. As we’ve discussed numerous times since Trump’s embarrassing appearance at the G7 summit in Quebec, the United States enjoys a trade surplus over Canada to the tune of $8.4 billion by the end of 2017. Incidentally, that’s neither fake news nor a liberal conspiracy to embarrass Trump. The details about the trade surplus with Canada were reported by Trump’s hand-picked trade rep and posted here.

Nevertheless, Trump decided to antagonize Canadian Prime Minister Justin Trudeau, name-calling him as “meek,” “mild,” “weak” and “dishonest” while lying about the facts regarding trade between the U.S. and Canada. How many more times will Trump go down this road without being yanked back into submission? Who knows.

Throughout this dark ride, Trump has pulled the same stunts with numerous other nations and their leaders while simultaneously acting as an agent of Vladimir Putin, whose active measures are intended to: 1) disrupt democratic processes and norms, and 2) shatter Western alliances. So not only is Trump acting like Putin’s custom-rigged psycho-bomb deployed within every alliance we’ve built since World War II, he’s also enabling Putin’s measures in Europe, Britain and elsewhere, endangering other democracies besides our own.

The question we must seriously consider is whether our allies will begin to take action against Trump beyond tariffs, especially as the viral infection suffocating our politics and institutions spreads into their own nations as well. That’s where the concept of sanctions comes in.

There are two specific targets for sanctions: the U.S. economy or Trump himself.

The impact of economic sanctions against our economy would be intended to trigger a larger-scale backlash among American voters against Trump, just as our economic sanctions against Russia are partly intended to generate internal dissatisfaction with Putin’s despotism, including and especially his incursion into Ukraine and Crimea. The greater the economic impact of the sanctions, the idea goes, the greater the likelihood of voters ousting Trump in 2020 or possibly supporting impeachment proceedings before then.

That option seems unlikely, since it could inflict general and widespread economic harm on the U.S., not only punishing our people but producing a concentric ripple effect that could be devastating throughout the global economy. It's unlikely, but it's still possible. There’s no off-position on Trump’s crazy-switch and we don’t know how maniacal he could get or how other nations might feel they had to respond.

Rep. Keith Ellison, D-Minn., deputy chair of the Democratic National Committee, published a piece on Friday in the Guardian in which he agreed that broader sanctions, while tempting, could hurt ordinary Americans who have nothing to do with Trump’s erratic and misinformed policy decisions. Such sanctions could even help him, as Ellison observed: “Trump may even benefit from a rally-round-the-flag effect that often accompanies broad economic sanctions.”

The impact of broader sanctions might also fall on deaf ears, given how out-of-touch Trump can be. Matt Yglesias wrote in Vox earlier this month, regarding the possibility of sanctions against the U.S., that “it’s simply not clear whether Trump cares about the welfare of American citizens or even thinks about the potential political ramifications in a normal way.” Yglesias also noted that given the health of the economy (thanks, Obama!), the sanctions would have to be extraordinarily severe in order to have the desired impact.

The other option is to sanction Trump personally.

This would mean applying sanctions against Trump’s properties, Trump’s many businesses and perhaps any cash held in overseas accounts, including assets owned by Trump’s family as well. Both Yglesias and Ellison agree that this is a potentially more effective approach. Yglesias recommended that our allies ought to “work together on a package of targeted sanctions narrowly designed to inflict pain specifically on the Trump Organization.” Ellison, meanwhile, called this a “more moral strategy,” adding:

For example, the EU and member states could prohibit officials from staying or holding events at Trump properties, or block the use of European money in financing Trump business and development deals. Just moving ahead on the planned placement of windmills near his Scottish golf course might be more likely to get Trump’s attention than a tax on motorcycles.

“Canada could add a tax to Trump properties equal to any tariff unilaterally imposed by Washington,” he writes. “The European Union could revoke any travel visas for senior staff in the Trump organization. And the United Kingdom could temporarily close his golf course.”

Given the hundreds of businesses Trump owns and the variety of (shoddy) products and services the Trump Organization provides, the possibilities are nearly limitless. Plus, it wouldn’t be terribly difficult to enumerate an entire roster of justifications for hitting Trump’s business interests, both in terms of corruption and the harsh impact of Trump’s unprovoked assaults on both the leadership and economies of the sanctioning nations. I don’t think Trudeau, for instance, would have much trouble generating popular and political support for sanctions against Trump and his businesses.

The bottom line here is that Trump and his loyalists can’t be allowed to believe that his behavior on the international stage, now including the indefinite detainment of Central American children in internment camps, can continue without blowback. While Trump would certainly rupture an O-ring when personally sanctioned, it might be enough to snap him into a more cooperative footing. Yglesias reminded us of Trump’s sudden about-face on sanctions against the espionage-linked Chinese telecom ZTE when $500 million in Chinese funding for a Trump property in Jakarta was on the hook. Like all bullies, Trump is easily triggered into capitulating. As soon as it looks like his financial future is in jeopardy, he might change his tune.

After all, Trump's entire presidency is about enriching himself, his business and his family, in that order. If that weren't true, he would have divested from his financial interests and released his tax returns. His money is his weakness, and it wouldn’t take much to swiftly kick him where it hurts.