Is Donald Trump truly incompetent? Not nearly as much as liberals hope

Liberals keep underestimating Trump, but he's been effective at enacting his racist agenda and trolling the left 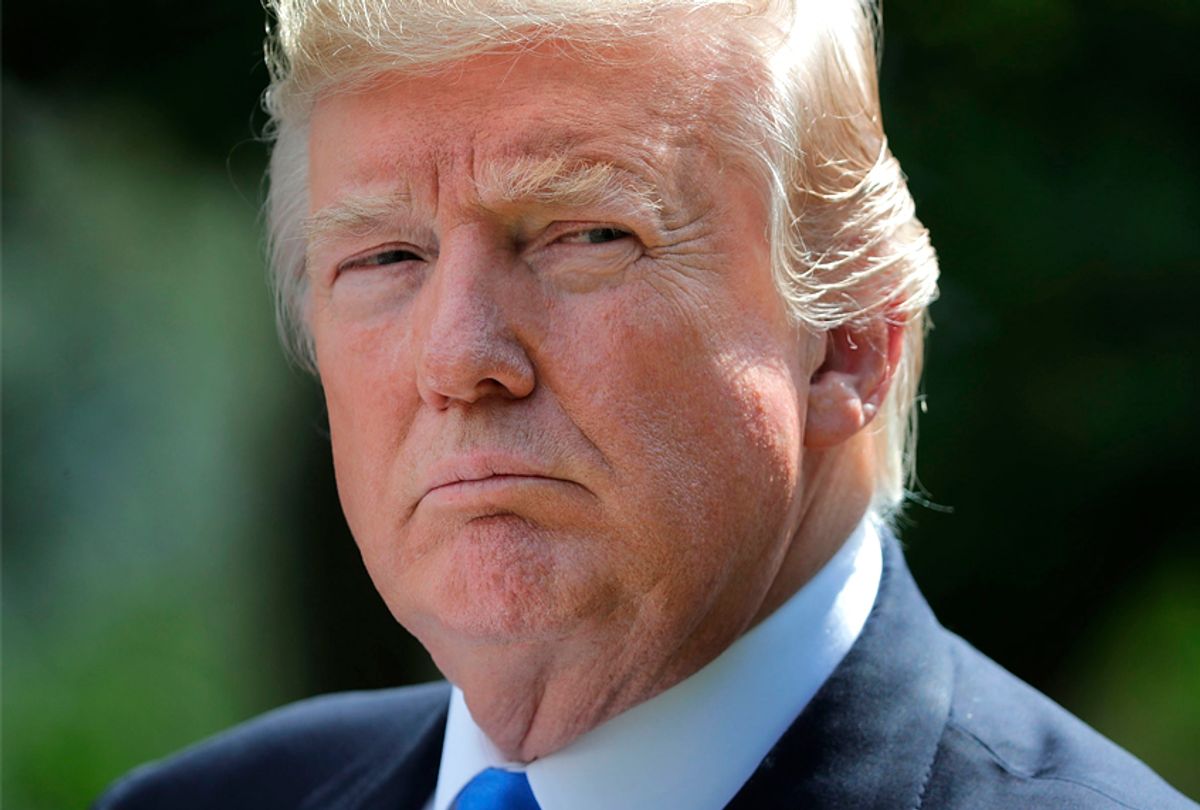 I hate to be the bearer of bad news, but unfortunately it must be said: Donald Trump knows exactly what he's doing.

To be clear, I'm not saying the man is a super-genius or even particularly intelligent. By most measures, Trump is likely of below-average intelligence. He's incurious, half-literate and would almost certainly be flummoxed by a basic math problem or a grade-school reading comprehension test. He ran his business into bankruptcy multiple times because his sense of his own talents grossly outstripped what nature had given him. None of this is in dispute.

But when it comes to Trump's true passion in life — being an abusive, bigoted bully and troll — he is highly competent and extremely successful. As I argue in my book, "Troll Nation: How The Right Became Trump-Worshipping Monsters Set On Rat-F*cking Liberals, America, and Truth Itself," Trump's voters elected him to do two things: 1) Impose his white supremacist vision on America and 2) Troll liberals into madness.

A year and a half into his presidency, we can say that by those measures, the Trump presidency has been a smashing success.

For some reason, there's widespread resistance among progressives to the proposition that Trump might actually be competent, at least at the goals he set out to accomplish, i.e., liberal tears and white supremacy. New York Times reporters like Maggie Haberman keep portraying him as a dim-witted and lazy old man, not a person who has become an accomplished sadist after a lifetime of practice. Many liberals are eager to buy into that because the idea that the orange moron in the ill-fitting suit might actually be getting over on us is painful to accept.

So liberals keep chalking up certain horrors of the Trump administration to incompetence, when the likelier explanation is that Trump and his cronies are doing these things by design.

I usually agree with Salon columnist Heather Digby Parton, but her recent piece on this topic misses the mark by ascribing the fallout from both the Muslim travel ban and the family separation policy to incompetence. I would argue instead that things rolled out exactly how the administration wanted.

Digby writes that the administration "hadn't thought through the logistical ramifications" of the Muslim travel ban, "resulting in confusion and chaos everywhere." Similarly, she argues that a plan "for clear identification of the children and their parents, so they can easily be tracked and identified for reunification at the end of the process, was overlooked."

She also argues for political incompetence, writing, that Trump officials "failed to anticipate how people would react" to "taking babies from their mothers."

Michelle Goldberg, writing for the New York Times, makes a similar argument, writing that there's " a multiplier effect" to "Trump’s incompetence and malevolence," crediting that combination as the cause of "the White House’s catastrophically inadequate response to Hurricane Maria in Puerto Rico" and "the cavalier way the administration took thousands of children from migrant parents with no process in place to reunite them."

From where I'm sitting, there's no reason to assume incompetence in any of this. Trump is a racist and a sadist, and both have been well-documented for decades. What more could a person with those qualities want than trapping Muslims in airports, destroying the lives of Puerto Ricans, separating Latino immigrant children from their parents and then "losing" the paperwork necessary to reunite them? This is the Trump who talks about immigrants from "shithole countries" being "animals." Using assumed ineptitude as pretext for dishing out pain sounds about right to me.

That Team Trump is doing all this on purpose should be obvious, no matter what kinds of eye-rollingly false stories about the women around Trump begging for mercy for brown people get "leaked." Here's an important quote from a recent article by Gabriel Sherman of Vanity Fair about Stephen Miller, who has had his hand in all this allegedly incompetent policy:

“Stephen actually enjoys seeing those pictures at the border,” an outside White House adviser said. “He’s a twisted guy, the way he was raised and picked on. There’s always been a way he’s gone about this. He’s Waffen-SS.”

I'd bet dollars to donuts that Trump, a man who bragged about the pleasure of grabbing women by the pussy knowing they can't do anything about it, gets a similar sadistic thrill.

A lot of us on the left, I think, are still stuck in the George W. Bush paradigm of thinking about these issues. Bush's biggest failure, the Iraq war, really was the result of hubris and incompetence. Whatever bigotries and conquistador fantasies fueled that debacle, I doubt anyone thinks that Bush wanted Iraq to fall into chaos that spread across the Middle East. He and his advisers were simply too dumb, too arrogant or too blinded by ideology to see that that was likely to happen.

Donald Trump is a different beast. He frames every interaction with other people in terms of dominance and submission, has bragged about sexual assault and who allegedly does weird stuff like putting his water bottle on the floor just to enjoy Mike Pence submissively follow his lead. We should never attribute to incompetence what is likelier to stem from cruelty when it comes to Trump.

The same assumption needs to be in play when contemplating the political fallout from Trump's decisions. Seeing one's opponents protesting, hitting the streets and raising the alarm is something most politicians are eager to avoid. But Trump is the head of what I have deemed "troll nation." These folks enjoy provoking leftist opposition and thrive on "liberal tears."

Why hate and bigotry dominate the GOP

Salon's Amanda Marcotte on how the American conservative movement degenerated into "Troll Nation."

I firmly believe that Trump, guided by Steve Bannon, believes that getting liberals all wound up will work to his benefit. It delights the core voters in his base, who seem willing to support policies that will harm them simply in order to enrage liberals. Bannon apparently told Michael Wolff that was why Trump signed the Muslim travel ban on a Friday: "So the snowflakes would show up at the airports and riot." While much in Wolff's book is shady on sourcing, few dispute that Bannon spoke to him at length, and Bannon has not claimed he is quoted inaccurately.

Trump's habit of blunt but effective trolling was evident on the campaign trail in 2016. Remember how he planned a "rally" in Chicago — a city where he had little support and which he has routinely demonized in racial terms — and never showed up, guaranteeing an outpouring of photos of young and racially diverse protesters hitting the streets and getting into scuffles? Do we have any doubts how that played on Fox News? How about the time he brought Bill Clinton's accusers to a presidential debate, shortly after the release of the "Access Hollywood" tape? Or the way he got nearly every one of his Republican opponents to face-plant during the campaign by insulting them until they responded, at which point he gloated, like trolls everywhere, about how he'd gotten to them?

The man isn't good at much else, but he's a highly skilled troll. That doesn't make him a genius; most of this is obvious manipulation. Most people aren't as good at it because most people are burdened by some kind of moral compass. Trump isn't. His trolling isn't effective because he's so smart but because he is willing to be the level of despicable creep most people balk at being.

Melania Trump wearing a jacket from Zara — not the kind of clothing store she'd typically shop at, although there's one close to the White House — that reads "I Don't Care Do U?" is a classic Trump troll. It's not particularly clever and it's definitely not subtle, but it doesn't have to be. On the contrary, the in-your-face nature of the troll was so grotesque that liberals tied themselves into knots debating whether or not the message was intentional, because it was just so hard to believe anyone could be that nasty.

Believe it. Melania went on TV in 2011 and ranted about Barack Obama supposedly concealing his birth certificate. She's all aboard the Troll Train and has been for years. This isn't confusing or mysterious.

This matters because the question of Trump's competence undergirds what the public is to make of his supposed walk-back of the family separation policy. If, in fact, Trump is a blithering idiot who stepped on a hornet's nest, then there's reason to believe that he pulled back to avoid the public outcry, if nothing else. But if all this is motivated by sadism and trolling, then there's good reason to think Trump's executive order to "end" family separation is a feint, and the plan is, in fact, to return to the policy once the media has moved on.

It's important to remember what happened with the Muslim travel ban. Trump got his spectacle of "snowflakes" freaking out, got his obviously unconstitutional ban struck down and then kept throwing out amended versions tweaked in ways meant to elide the constitutional arguments about religious animus. While the first ban got a huge outcry, liberals eventually got exhausted and the media moved on. From Trump's point of view, this is likely a win: He got to make life hard for brown people, he stirred up his base with liberal tears and there was little or no long-term political fallout, at least in the terms he understands, meaning whether people are talking about it on CNN.

Trump's executive order "ending" family separation is a flagrant violation of legal precedent that will almost certainly be overturned in a few weeks, at which point in time the administration will likely return to the policy of family separation with full confidence that the media has found newer and shinier objects to focus on and liberals are too exhausted to fight the same fight over again. Trump has suggested that this is the plan, in fact, saying on Thursday that his executive order "leads to separation ultimately."

As someone who consumes hours of cable news daily, Trump understands how the media operates well enough. He thinks he has a winning strategy worked out here, and he may be right. His base, drunk on anger and racism, is all riled up. His opponents underestimate him, blaming incompetence for decisions that are almost certainly deliberate and strategic. The only way to defeat Trump is to stop underestimating him and see him for what he is -- a sadist who makes up in ruthlessness what he lacks in intelligence -- and to vote his enablers in the Republican Party out of power.