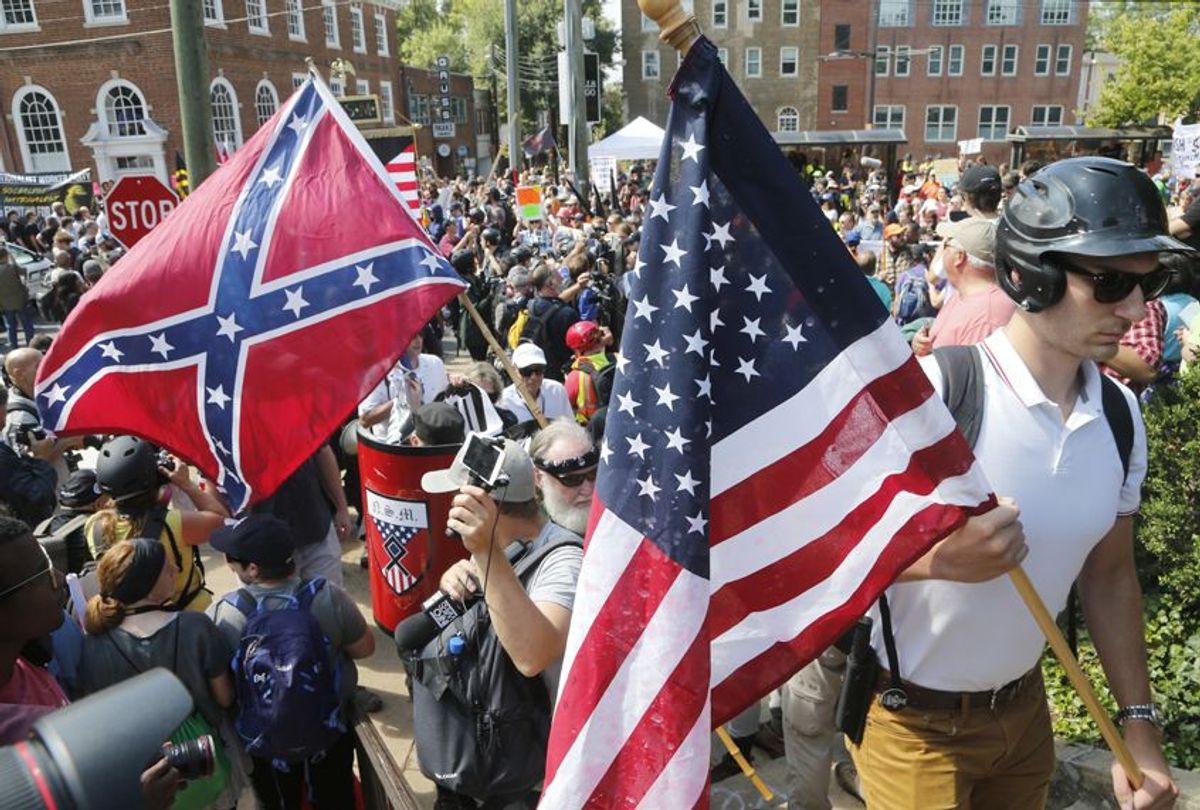 Vasillios Pistolis, a United States Marine Corps lance corporal who ProPublica and Frontline identified as a neo-Nazi and assailant during last August’s bloody white supremacist rally in Charlottesville, Virginia, has been convicted at a court martial on charges of disobeying orders and making false statements.

Pistolis, 19, will be imprisoned for a month, docked pay and reduced in rank to private first class, and then likely forced from the Corps, according to a USMC spokesman.

Pistolis, a water support technician, was treated as low-level offender by military authorities, who tried him at what is known as a summary court martial, which is akin to a misdemeanor trial.

The Marine Corps — and every other branch of service — has regulations barring members from participating in racial extremist groups, but military officials offered no specific details about what prompted the court martial. Pistolis is assigned to the 2nd Marine Logistics group, which operates out of Camp Lejeune, a large installation on the North Carolina coast. Public affairs officers with the logistics group issued a brief press release about the court martial, but did not respond to repeated requests for comment from ProPublica and Frontline.

Pistolis had been slated to serve with the Marines through 2020, but Maj. Brian Block, a Marine Corps spokesman at the Pentagon, said Pistolis was being “processed for separation” from the Corps.

Efforts to contact Pistolis were not successful. It was unclear if he entered any plea or made any statements during his court martial. During earlier interviews with ProPublica and Frontline, Pistolis acknowledged that he had “alt-right” or white supremacist beliefs, but denied that he was in Charlottesville and said he was no longer involved with any white power group.

Last month, ProPublica and Frontline revealed Pistolis’ involvement with the Atomwaffen Division and Traditionalist Worker Party, two of the most militant groups in the neo-Fascist movement. In the past 13 months, Atomwaffen Division members and associates have been charged in five murders and a bomb plot.

Pistolis’ involvement in both groups was extensively documented in online chat logs and his own social media presence. In multiple posts made during and immediately after the Charlottesville rally, Pistolis bragged about his involvement in the violence over that fatal weekend last August, and posted photographs accompanied by detailed narratives of the assaults he committed.

“Today cracked 3 skulls open with virtually no damage to myself,” Pistolis wrote on Aug. 12, 2017, the day of the event. Other Atomwaffen members warned Pistolis not to boast about his criminal exploits in the group’s private chats. “We don’t post anything that incriminates anyone on here,” a user with the handle of “Jason” reminded him.

Photographs taken at the rally show Pistolis clubbing an unidentified counter-protester with a wooden flagpole. Pistolis would later post photos of his bloody custom-made Confederate flag to chat logs, with the addendum, “not my blood.”

Pistolis also bragged about assaulting a well-known local activist, Emily Gorcenski, on the night of Aug. 11, 2017. Multiple videos taken that evening show Pistolis, dressed in a black Adidas tracksuit, launch a flying kick in the direction of Gorcenski, although it is unclear if he connected. In Atomwaffen’s chats, Pistolis claimed that “I drop kicked Emily Gorcenski.”

Gorcenski told ProPublica and Frontline that Pistolis’ court martial was “the first measure of justice any of the anti-racist demonstrators have received for the events of August 11.”

“I remain concerned that the U.S. Marines have not yet discharged him, and his access to and training with military weaponry should be a concern to everyone,” said Gorcenski. She remains hopeful that civilian authorities will bring further charges against Pistolis for the violence in Charlottesville.

There is a civilian investigation into the mayhem in Charlottesville last summer being conducted by the U.S. Attorney for Virginia’s Western district.

University of Virginia police began looking into Pistolis’ actions on Aug. 11, 2017 after being asked about its pursuit of any assailants by ProPublica and Frontline. Sgt. Casey Acord of the UVA police said in an interview Wednesday that after investigating Pistolis’ conduct and interviewing the person named as a victim in the incident, no further action would be taken. “The case will not move forward,” Acord said.

Ed Beck, a veteran who filed a report with Marine Corps investigators last October about Pistolis’ participation in a white supremacist rally in Tennessee, told ProPublica and Frontline that Pistolis’ charges were “the lowest level of court martial the Marine Corps could’ve decided to bring against him.”

Beck told ProPublica and Frontline earlier this year that he suspected the military had not acted aggressively in response to his information about Pistolis. The eventual disposition of the case, he said this week, left him convinced the Marine Corps isn’t taking the new wave of racial extremists seriously.

“In the same way that they ignored my report to them in October, I’m not surprised that this is all they charged him with,” Beck said.

This story was co-published with Frontline PBS.