We now have a terrifying, militarized law enforcement system 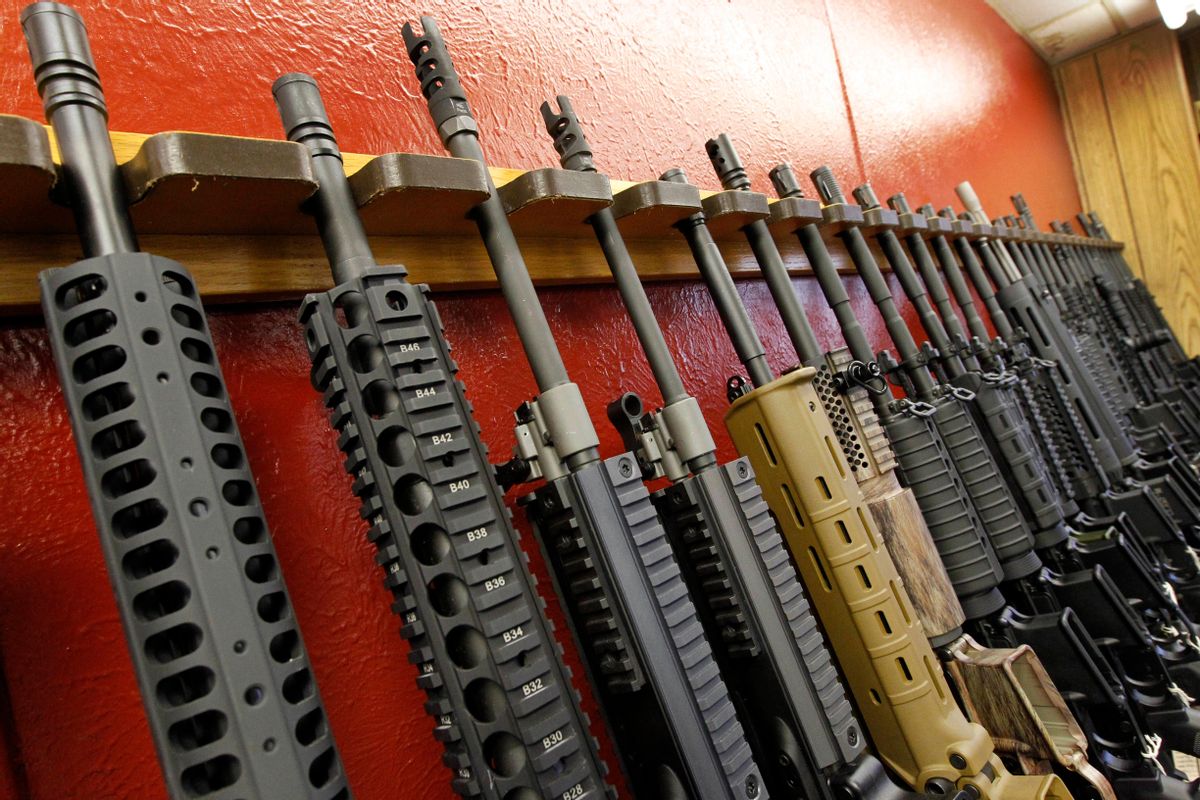 On June 5, a call came into the Broward County Sheriff's Office alleging an ongoing hostage situation at the family home of student activist David Hogg, a survivor of the shooting at Marjory Stoneman Douglas High School in Parkland, Florida. Law enforcement officers arrived on the scene only to find no such situation: Hogg and his family had been swatted.

Swatting involves falsely reporting a crime, which leads to the deployment of heavily armed law enforcement officers, usually para-militarized Special Weapons and Tactics (SWAT) teams, who anticipate confronting violence. Hogg was not home, and was therefore unharmed, but previous swatting victims have not been so fortunate.

Just two months before, Hogg had gathered with an estimated 800,000 Americans in Washington, D.C., for the March for Our Lives on March 24, which was inspired by the shooting at Marjory Stoneman Douglas High School to rally support for more stringent gun control policy. Among the specific policy objectives of the demonstration was to advocate for an assault weapons ban, like that which was enacted in 1994 but has since expired. The reasoning behind this current push for an assault weapons ban, as with the 1994 ban, endures: Civilians should be barred from possessing military-style weapons.

Had David Hogg been home, the swatting of his home might have been the second time in less than four months that his life had been threatened by an assault weapon. That’s too many encounters for an entire lifetime.

As this current gun control movement argues that the militarization of civilians is something to be avoided, perhaps it is also time to extend this same consideration to civilian law enforcement.

“Weapons of war have no place in our communities,” the March for Our Lives insisted. Yet, such weapons are scattered throughout and utilized in communities across America. And they include more than assault weapons.

With more than $5.4 billion in donated equipment from the Department of Defense’s 1033 Program and $34 billion in grants from the Department of Homeland Security, state and local governments have equipped their law enforcement officers with a military arsenal. Among other materials, this arsenal includes “armored personnel carriers, M-16 assault rifles, grenade launchers, and infrared gun sights,” materials more suited to sites of hot war than neighborhoods in Indiana. Federal funding outfitted police officers in and around Fargo, North Dakota, which, as of 2011, had an average murder rate of two per year since 2005, with assault rifles on every squad car, Kevlar helmets, and a more than $250,000 armored truck.

The proliferation of military weapons and gear corresponds to that of para-militarized law enforcement officers.

Modeled after the military and armed as such, SWAT teams are the most visible and recognizable manifestation of the militarization of law enforcement. And they’re becoming more numerous. Research has suggested that 80 percent of towns with populations ranging between 25,000 and 50,000 residents had SWAT teams as of the mid-2000s. That represents a major increase from the mid-1980s when only 20 percent of such towns had a SWAT presence. And these para-militarized law enforcement officers are being used more often: Deployments increased 1,400 percent between 1980 and 2000.

Perhaps more disturbing than the growing number of para-militarized units is what their deployments are meant to achieve. Research from the University of Missouri-St. Louis determined that the majority of SWAT deployments in their research sample between 1986 and 1998 were for warrants (34,271) as compared to barricaded suspects (7,384) and hostage situations (1,180). A more recent 2014 study from the American Civil Liberties Union (ACLU) reaffirms this trend. Using incident reports from SWAT deployments between 2010 and 2013 from law enforcement agencies across the country, the ACLU found that 79 percent of evaluated SWAT deployments were to act on a search warrant. Sixty-two percent of those search warrants were to conduct drug searches. According to the ACLU, these searches are “almost always” conducted by SWAT teams armed, to some extent, with “assault rifles, battering rams, and distraction devices.”

In other words, many of the between 50,000 and 80,000 SWAT team raids that occur every year somewhere in the country with military-grade equipment are to perform standard functions of crime control, prevention, and investigation. Militarization has transformed civilian law enforcement officers into something that more resembles soldiers responding to war than public servants. An assault rifle is probably no more needed to execute a warrant than it is to hunt deer.

The March for Our Lives was visibly intersectional: Black and Latinx youth shared their experiences with gun violence alongside the survivors of the Marjory Stoneman Douglas High School shooting. Naomi Wadler gave voice to the violence faced by Black Americans “whose stories do not make the front pages of every national newspaper, whose stories don’t lead on the evening news.”

The racist underpinnings of the War on Drugs, which was launched by the Nixon administration to harass Black communities according to Chief Domestic Advisor to President Nixon John Ehrlichman, have combined with the militarization of law enforcement. The result has been that suspected drug use among Black Americans is disparately addressed using militarized action. Despite the fact that Black Americans are no more likely to use or sell drugs than their White counterparts, the ACLU found that Americans of color, including Black Americans, were 61 percent of those impacted by SWAT drug raids. Drug searches constituted 68 percent of the SWAT raids that involved Americans of color, but only 38 percent involving Whites.

Whether practiced by civilians or law enforcement, militarization can have deadly consequences. An analysis by Everytown for Gun Safety of known mass shootings that occurred between January 2009 and January 2015 revealed that the use of assault weapons or high capacity magazines led to 155 percent more people shot and 47 percent more fatalities. Data on law enforcement killings in four states compared to data on the transfer of 1033 equipment uncovered a positive correlation between law enforcement possession of military equipment and civilian deaths at the hands of law enforcement.

Consistent with the ACLU’s observation that the burden of law enforcement militarization falls disproportionately on people of color, the New York Times determined that Americans of color represented half of the civilian deaths it documented.

Gun violence of the kind that Wadler referenced has uniquely devastated Black communities, but law enforcement officers have played an outsized role in that devastation. According to an investigation from the Washington Post, Black Americans represented 23 percent of those shot by law enforcement in 2017. The threat of gun violence loomed large in the predominantly Black community of Ferguson, Missouri, in the wake of the death of Michael Brown. Law enforcement stared down protesters with tanks, automatic rifles, shotguns, and pistols and confronted them with tear gas and smoke bombs.

A climate of fear

Even schools, which have seen some of the deadliest episodes of violence perpetuated by assault weapons, have witnessed the militarization of law enforcement.

A 2014 audit from the Washington Post found that law enforcement agencies connected to a variety of educational institutions across 33 states, including more than a dozen schools, have received military gear and weapons through the 1033 Program. The presence of the 1033 Program has been especially apparent within the Los Angeles County Police Department (LCPD), which the Washington Post describes as “among the biggest public-school beneficiaries of the program.” As of the 2014 audit, the LCPD had obtained 61 M-16 assault rifles, three grenade launchers, and one MRAP. It’s difficult to see how the presence of law enforcement officers armed with weapons of war in schools might improve student safety. However, it’s easy to see how that might create a climate of fear, especially for students of color.

Is such a limited decrease sufficient to justify what might have happened to David Hogg and his family?

Nevertheless, heightened militarization is exactly the approach to safety, in schools and beyond, that is being suggested.

President Barack Obama tried to curb the alarming spread of military equipment to state and local law enforcement. His administration offered new prohibitions and stipulations on the exchange of military-grade equipment between the federal government and local law enforcement in 2015. Among other changes, the administration prohibited the exchange of grenade launchers, weaponized vehicles, and rifles.

By November 2017, President Donald Trump had undone the decision.

Military-grade weapons and gear banned by the Obama administration might become more entrenched in America’s schools thanks to President Trump: Immediately following the school shooting in Parkland, the president suggested positioning more law enforcement officers in schools and even arming teachers as a means of thwarting school shootings. These solutions, Trump’s version of the infamous National Rifle Association “good guy with a gun” theory, would create or deepen problems while solving none. Studies have shown that the presence of law enforcement officers already portends increased chances of arrest in some cases, thus perpetuating the school-to-prison pipeline. And that’s one of the best case scenarios. Recall the study positively linking the transfer of military equipment to civilian deaths: Students could face being killed by both fellow students and law enforcement officers armed with military-grade firearms from the federal government meant to protect them.

No reasonable American would be comfortable with the active presence of automatic and semi-automatic rifles, MARCbots, Mamba tactical vehicles, sniper rifles, ballistic shields in schools. Maybe they don’t belong actively roaming the streets of our communities in the hands of law enforcement officers either.