Don't sleep on Robert Mueller and the Russia probe: It's about to get hot for Donald Trump

High anxiety for Team Trump: A Democratic senator says, "Buckle up!" Big news from Mueller probe could be coming 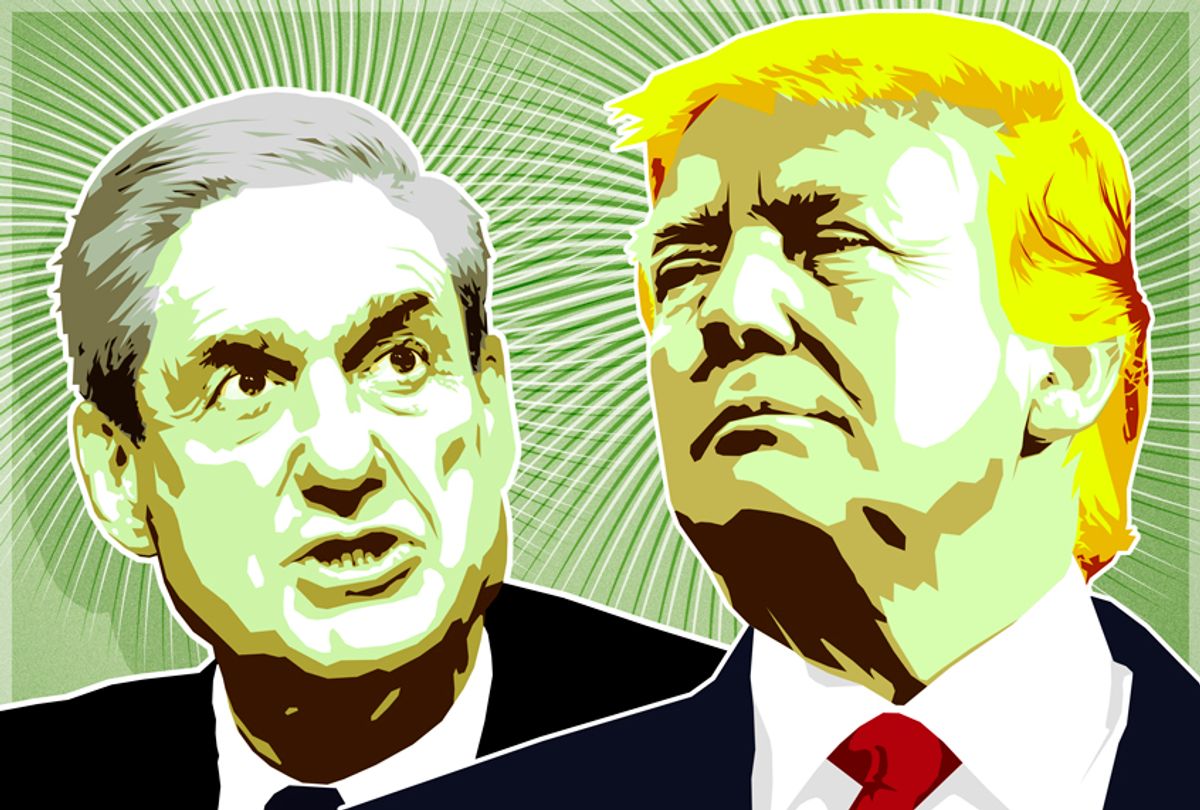 I've written before about the fact that Sen. Mark Warner, D-Va., the vice chair of the Senate Intelligence Committee, is no bomb-throwing partisan. Yet last December he very ostentatiously gave a big speech on the floor of the Senate that caused more than a few ripples across the political media by drawing a "red line" at the possible firing of Justice Department Special Counsel Robert Mueller. The timing was weird, right before Christmas. Nobody knew of any reason why he would do that out of the blue.

It was later reported in The New York Times that right around that time Trump had gone ballistic and was threatening to fire Mueller over a report that he had demanded Trump Organization records from Deutsche Bank. It turned out that report was erroneous and Trump's lawyers were able to talk him out of it. But news of his tantrum must have reached beyond the White House, since Warner felt the necessity to go to the floor and warn him off.

So Warner knows things. Politico reported a little nugget of political gossip on Sunday that made Russia-investigation watchers sit up and take notice:

SEN. MARK WARNER (D-Va.) hosted a dinner Friday night for more than 100 guests at his house on Martha’s Vineyard as part of the DSCC’S annual Majority Trust retreat. OVERHEARD: Warner, the vice chairman of the Senate Intelligence Committee, joking to the crowd: “If you get me one more glass of wine, I’ll tell you stuff only Bob Mueller and I know. If you think you’ve seen wild stuff so far, buckle up. It’s going to be a wild couple of months.”

Nobody's sure exactly what Warner was hinting at, and he says he was just joking. But there have been a number of clues over the past couple of weeks that the investigation is picking up speed.

Mueller has called in some new prosecutors, reportedly to spin off the part of the investigation pertaining to the Russian firms he previously indicted. It's unclear why he decided to do that, although informed speculation says he's either punting on that case, since there's no hope of extraditing the accused, or simply freeing up some of his more seasoned prosecutors to concentrate on the more important cases.

Trump's former campaign manager, Paul Manafort, is now sitting in jail contemplating his future while his lawyers present a flurry of different arguments to spring him, none of which have been successful so far. Trump's former lawyer, Michael Cohen, is reportedly getting ready to cooperate with the feds in his case in New York, and Mueller is said to be eyeing his involvement very closely. Erik Prince, the former Blackwater CEO who seems to have turned up in numerous meetings with Russians and Middle Eastern potentates offering "back channels" during the presidential campaign, told the press that he's "cooperating" with the Mueller probe and has turned over his phone and computer to investigators. (Most legal analysts seem to be skeptical of Prince's sincerity, which isn't surprising.)

Trump's old friend Roger Stone is reportedly in Mueller's crosshairs and is considered most likely to be the next person indicted. (This piece by Marcy Wheeler explains just how much trouble Stone may be in and how his case is a likely template for others.)

Then there are the spicy rumors like Warner's and this little number by BBC journalist Paul Wood late last week:

An American lawyer I know told me that he was approached by a Cambridge Analytica employee after the election. They had had the Clinton campaign emails more than a month before they were published by WikiLeaks: ‘What should I do?’ Take this to Mueller, the lawyer replied.

Again, this could just be idle gossip, but it might explain why the CEO of Cambridge Analytica, Alexander Nix, approached WikiLeaks out of the blue in June of 2016, offering to help them "catalog" emails that hadn't been released yet. If this is true, it's a big deal and could implicate Brad Parscale, the man who ran Trump's digital operation in 2016 and who has already been tapped as his campaign manager for 2020.

Those are just a few examples of recent reports of activity in the investigation. Perhaps they don't add up to much individually, but when you combine them with the behavior of the president, it starts to look as though the pressure really is increasing. For instance:

And this, in response to the Warner story:

Trump also did his usual shtick, bragging incessantly about his fantasy accomplishments while blaming others for all possible problems. But he was clearly distracted and unable to keep one train of thought going. He isn't himself.

Signs of panic are showing among the Trump loyalists as well. CNN reported that the president's most dedicated lieutenants in the House are pushing feverishly for the various investigating committees to work faster and take action against the Justice Department as quickly as possible. They've accelerated their smear campaign against Mueller's office and continue to harass the DOJ to provide evidence in the ongoing case, for the obvious purpose of sharing it, exposing it or discrediting it in advance of any legal proceedings. The department is sharing some documents in what appears to be a strategy to buy time.

The Atlantic's Natasha Bertrand reported on Republicans' parallel strategy to build on the discredited "Spygate" non-scandal by pushing the idea that anyone in the Trump campaign shown to have interacted or conspired with Russian agents was actually the victim of an FBI frame-up. Rudy Giuliani has used that exact language in the press.

This all seems to be aimed at public opinion, which, as Giuliani helpfully explained some time back, is in service of preventing the required two-thirds vote in the Senate in a possible impeachment trial. That's a remarkably pessimistic view from the president's lawyer of where this is headed.

This is all speculation, of course. Mueller's actual investigation is sealed up tight as a drum. But there looks to be considerable agitation among people associated with various pieces of the puzzle. As Sen. Warner said, "Buckle up."

Obama's director of national intelligence on the 2016 attack on democracy.