Dear Sarah Huckabee Sanders: You got what you deserved — but there's still time to change

You don't look comfortable behind that podium, and I think I know why. Americans are forgiving: Just let go 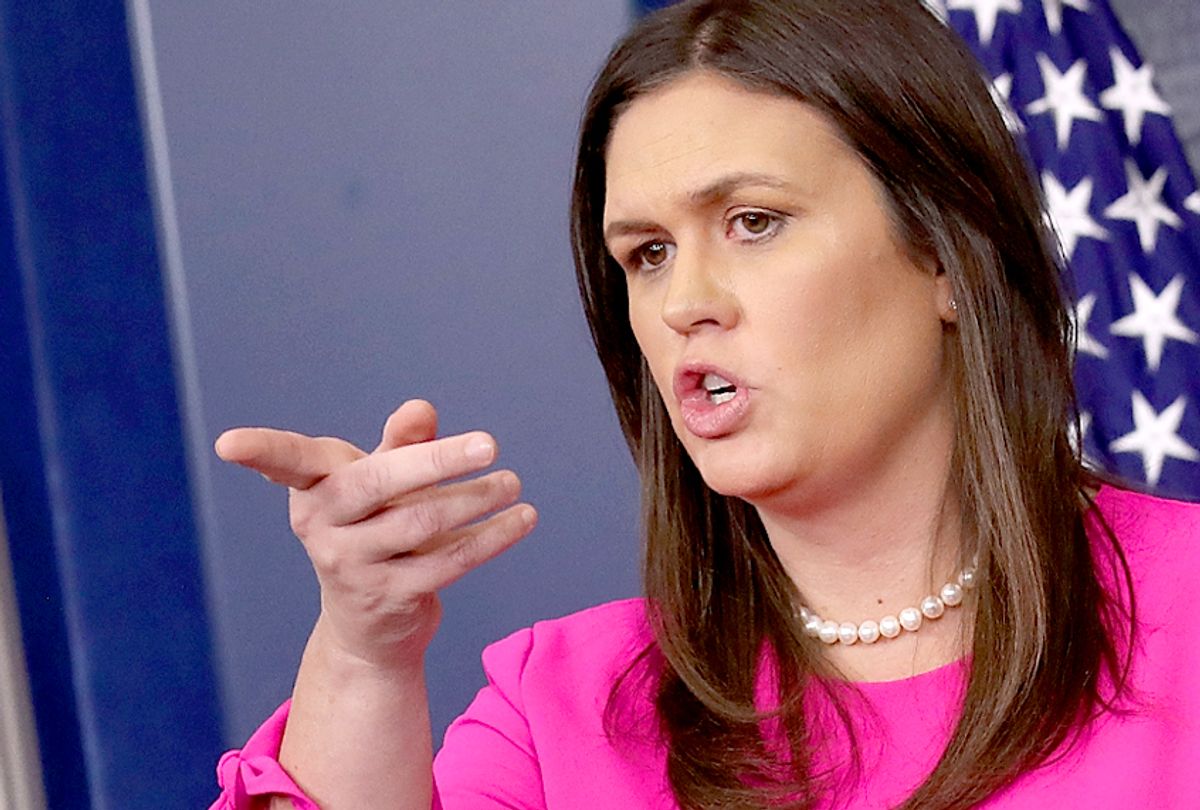 Last Friday, White House Press Secretary Sarah Huckabee Sanders, her husband and some acquaintances were booted from the Red Hen, a farm-to-table restaurant in Lexington, Virginia. This was the decision of one of the restaurant's owners, Stephanie Wilkinson, who said, "I'm not a huge fan of confrontation.”

"I have a business, and I want the business to thrive." Wilkinson continued. "This feels like the moment in our democracy when people have to make uncomfortable actions and decisions to uphold their morals."

Like any true product of the run-and-tell-Twitter administration, Sanders took her response to social media:

Her dad, the MVP of coming in last in every presidential election since I started voting, also chimed in:

Of course, the drama wouldn't be complete without Donald Trump giving his two cents and disrespecting a place he’s never set foot in.

Maxine Waters calls for attacks on Trump administration: "If you see anybody from that Cabinet in a restaurant, in a department store, at a gasoline station, you get out and you create a crowd and you push back on them, and you tell them they’re not welcome anymore, anywhere." pic.twitter.com/jMV7wk48wM

The whole exchange about whether Sanders should’ve been kicked out of the Red Hen or not tore Twitter apart, except but not really – you can’t break something that has already been shattered into a million pieces, or even into thirds. As I see it, our country is at least split into thirds: There are the Trumpers, the anti-Trumpers and then the people who can’t afford to play.

I thought I'd make my case directly to the woman who comes out every day (or when she feels like it, anyway) and defends Trump to the White House press corps.

I'd smile if I were you, ear to ear. You should be happy that restaurant kicked you out. You should write a thank-you letter and send five dozen roses to Stephanie Wilkinson, along with some type of gift card. Why in the world would you want to eat at a place full of people who don’t like you? They watch you cosign any and everything that the president says. We know his lying power is uncanny – second to none, his only true talent -- but you reinforce those lies. If he were the Professor X of liars, you’d be the Jean Grey. This would be all fun and games if these lies, along with the divisiveness, race-baiting, misogyny, homophobic, transphobic and xenophobic behavior, didn’t hurt real people. But they do.

Right now, there are children separated from their parents who have no idea when they will see them again. That's just the latest example of how the administration you represent causes people to live in fear because of the actions and policies you protect, promote and make excuses for, day after day.

You were tossed out of that restaurant, and I bet it didn’t feel good to be rejected and embarrassed, especially as a white person with power, money and fame in America. So imagine if you had to feel like that every day? If anything and everything you needed, wanted or requested came back as a no? Or what if you'd been snatched away from your parents for an undetermined amount of time because Maxine Waters wanted to Make America Great Again? Would that be cool? Because that’s how the Trump administration  is making many Americans feel.

You claim that you treat people you disagree with "respectfully" and that you will "continue to do so,” but you are affiliated with people who specialize in disrespect. Donald Trump has disrespected everything and everyone: the women in his private life, Mexican immigrants, Haitians and Africans, a reporter with a disability, Meryl Streep! And you've been part of that.

Your disagreements aren’t just a matter of meaningless political discourse between powerless civilians – you are connected to a source of pain to many people and you have to expect that resistance comes with that. I'm here to tell you that all is not lost. Americans can be forgiving people, and you have the platform and resources to make this right.

I was just telling my friend how you, like Sean Spicer, look really uneasy when you stand behind that podium. I think it’s because you know what you are doing is wrong. You don’t really want to be called a racist, become the butt of late-night jokes and be kicked out of a restaurant for promoting and protecting evil.

So why do it? Don't do it anymore. Apologize for your actions and walk away. Let it go with grace – history has been kind to many who saw the errors in their ways before it was too late.

P.S. I’ve eaten at the Red Hen and the food is amazing. You missed out. Can you even imagine what else you're missing out on?