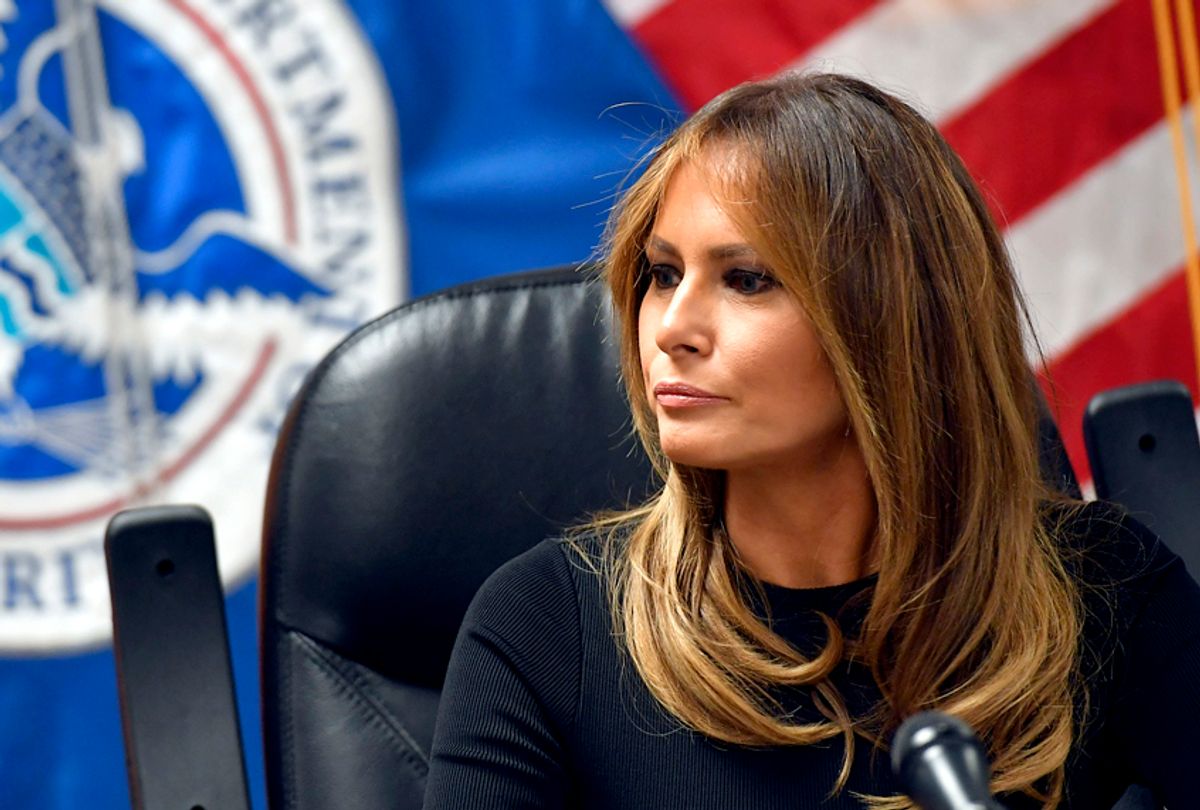 Melania Trump takes part in a round-table discussion during a visit to a US Customs and Border Protection Facility in Tucson, Arizona on June 28, 2018. (Getty/Mandel Ngan)
--

First Lady Melania Trump opted for a less-controversial wardrobe choice for her second visit to the U.S./Mexico border Thursday. Dressed in white pants and in a word-less black top, her outfit stands in stark contrast to last week's, when she stunned the country by wearing a green Zara jacket with the words sprawled on the back: "I really Don't Care Do U" while on her way to visit immigrant children separated from their parents.

During Melania's visit to Tuscon, AZ, on Thursday, she toured a holding facility for migrant children and stopped at a Customs and Border Patrol facility for a roundtable discussion with Border Patrol, Immigration and Customs Enforcement, the U.S. Marshals Service and a local rancher, in hopes of hearing from people on the front lines at the border, according to multiple outlets.

The visit marks Melania's second trip in a week to the border where many assumed her mission was to humanize the Donald Trump administration, who under its zero-tolerance stance on immigration enacted a family separation policy that has developed into a humanitarian crisis.

But that message was overshadowed by Melania's jacket. Grisham and the president offered different explanations for the fashion choice: the spokeswoman claiming that there was no hidden meaning and Trump tweeting that it was a directive for the "fake news media."

The jacket elicited strong reactions. Meghan McCain, co-host of "The View," said of the jacket, "I can't stand this. I think it's crazy. I don't care what message she's trying to send to the president or anyone else: It's inappropriate." She continued, "The whole point of being first lady is that we care. . . This message is horrible."

McCain also admitted that if former First Lady Michelle Obama had worn the jacket, Republicans would have been in an uproar. Conservatives frequently lambasted Obama for wearing sleeveless shirts and dresses during her time in the White House.

Late-night host Stephen Colbert also blasted Melania's jacket. "That’s what they settled on?" he asked on the "Late Show" last week. "She’s forgotten the most important fashion advice: before you leave the house, look in the mirror and take off that jacket. . . I’m going to guess this is one message she did not steal from Michelle Obama."

There have been more than 2,300 children separated from their parents at the border. While President Trump signed an executive order last week stopping the separation policy, he did not mention the reunification of families who have already been ripped apart.

Arizona state Senator Steve Farley told Salon that he and fellow legislators have not been allowed to tour these holding facilities. "It's one thing to have a celebrity tour with a press gaggle in tow, and another thing to actually have trained child welfare professionals investigating," he added, as there have been various allegations of abuse.

"I don't know if we're supposed to all of a sudden believe that now that Melania has toured," Farley continued, "without actually telling us anything about what they've learned or what's going on, that we're supposed to feel like now this is an OK policy. It's not. You don't take children away from their parents and put them in what's basically a private prison and you don't put families even with their children in private prisons."