Labor unions are critical to closing the gender and race pay gap. The Supreme Court just tried to shoot that down 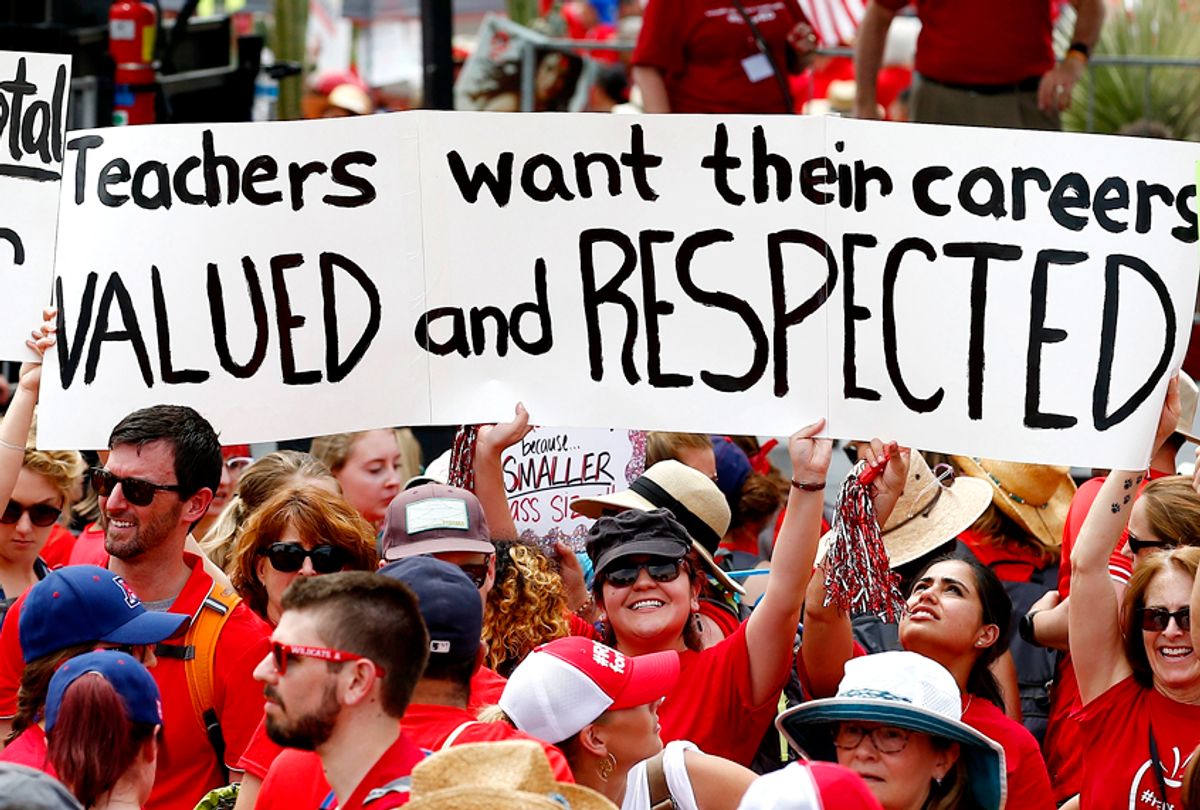 Thousands participate in a protest at the Arizona Capitol for higher teacher pay and school funding. (AP/Ross D. Franklin)
--

On Wednesday morning, the Supreme Court rounded off a month of bad to devastating decisions for progressive causes with a 5-4 decision that undermined the ability of public sector labor unions to finance themselves. Prior to the decision, unions were permitted to charge fees from workers they represented in negotiations, even if the workers didn't join the union. That's now gone.

Using shaky legal arguments, which Justice Elena Kagan excoriated in her dissent, Justice Samuel Alito argued that public sector workers have a free speech right to be free riders — workers who receive union benefits without paying for them, which could drastically undercut the financial power and membership numbers of unions.

The decision is part of a sustained, multi-decade Republican assault on unions, which has led to a drastic decline in the percentage of American workers who are organized. It's now down to 10.7 percent of total workers in 2017, from 33.4 percent of workers in 1945 and roughly one-fourth in 1971.

In a news brief released by the Center for American Progress Action Fund, policy analyst Alex Rowell and senior fellow David Madland argue that union organizing goes a long way towards narrowing the wage gap between not just men and women, but white workers and workers of color.

"Unions help change the balance of power in the workplace, while collective bargaining — especially when done above the firm level — provides an opportunity to address explicit and implicit forms of discrimination that can lead to lower pay for women and communities of color," they write. "Declining union membership has contributed to increased income inequality and today's gender and racial pay gaps in the United States."

When workers have union contracts, the pay gaps tend to diminish, the brief finds. Rowell and Madland found, using international data, that the effect was amplified when it came to industry-level collective bargaining, in no small part because the sheer number of workers who are covered in industry-level unionizing is larger than if it happens on a firm-by-firm basis.

"When unions set wages, it tends to be based more on objective standards," Rowell told Salon.

“Union contracts tend to focus more on things like education level, things like experience," Rowell continued. In more individual wage negotiations, on the other hand, there's a lot of subjective wiggle room for a boss to assess a worker's worth to the company and, he added, "explicit or implicit discrimination against women or people of color" often affects the outcome.

When it comes to public sector unions, which are what the Janus decision covers, the impact is even greater.

"Comparing public versus private overall, public sector workers overall had much lower pay discrepancies between men and women, [and] lower pay discrepancies between people of color and white workers," Rowell said, saying credit is due in large part to "the type of wage bargaining that happens at the public sector," which tends to be closer to industry-level and enjoyed considerable legal protection, at least until the courts started to gut the laws.

The stereotype of the union worker may still be a white guy in a hard hat, but the reality is very different. While men are slightly more likely to be in unions than women, it's not by much. A little over 11 percent of male workers are unionized, compared to 10 percent of women. Black workers are more likely than white workers to be in unions. And as labor struggles in state government have reminded Americans, a huge percentage of public sector employees in unions are teachers, a job still dominated by women.

Unions have started to put a greater emphasis on the need for equality and diversity in their political organizing in recent years, and, Rowell said, that's also seen at the bargaining table.

“Workers, when they’re negotiating their contracts, especially recently, have been really focusing on pay inequity and combating that," he said, noting that the spate of newsroom labor organizing efforts — such as at Vox Media, Slate and The New Yorker — have heavily featured such demands during negotiations.

But even absent an explicit focus on gender and racial equality in collective bargaining, women and people of color benefit from the way that wage negotiation often brings up the floor on wages, giving big boosts to the least-paid people covered by the union.

"When you’re setting [wage] floors, a lot of times people pulled up by the floors are the most discriminated against in the labor market," Rowell explained.

Even though they're often left out of the political discourse, except when they are thrust into the news by stories like the Janus decision, unions are a critical and irreplaceable part of the progressive agenda and, as this research shows, not just for worker rights.

"When we’re talking reducing inequality, whether it’s the 99 percent versus the one percent, whether it’s between men and women, or white workers and workers of color, union collective bargaining is just hugely important," Rowell said.

No surprise, then, that many prominent Republicans celebrated the Janus case as a defeat not just of labor, but of progressive and Democratic politics more generally. Donald Trump primarily saw it through his lens of political victory over the Democrats.

Senate Majority Leader Mitch McConnell — who successfully held a Supreme Court seat open for a year, until Barack Obama was out of office and Trump could nominate fill the seat — also gloated on Twitter.

But there's good reason to believe this is not a killing blow for public sector unions. As Benjamin Sachs and Sharon Block explained Wednesday at Vox, public unions "have been preparing for years for this decision, and many are ready with innovative approaches to attempt to adjust to the changes it puts in place." Indeed, unions have spelled out a series of moves that state legislatures can take to protect them, including some changes to the way states calculate union fees to navigate around the free-rider problem.

Karla Walker at the Center for American Progress Action Fund also put out a report on Wednesday detailing moves state legislatures could make to strengthen public sector unions, including requiring employers to inform workers of the benefits of unions and strengthening right-to-strike laws.

More importantly, this blow is being counterbalanced by good, old-fashioned people power of the sort that created public sector unions in the first place. Wildcat teacher strikes have been erupting across the country, even in states that have done everything possible to outlaw collective bargaining for government workers, and in most places, these teachers have found public support.

The degraded work conditions and pitiful salaries teachers often have -- because of public-sector union breakdown in those states -- have given them leverage, perversely enough: They can't be fired en masse because it would be too difficult to find replacements who will take their jobs. Inducing desperation in workers eventually backfires, by pushing them to the point where they feel have nothing left to lose by standing up for themselves.