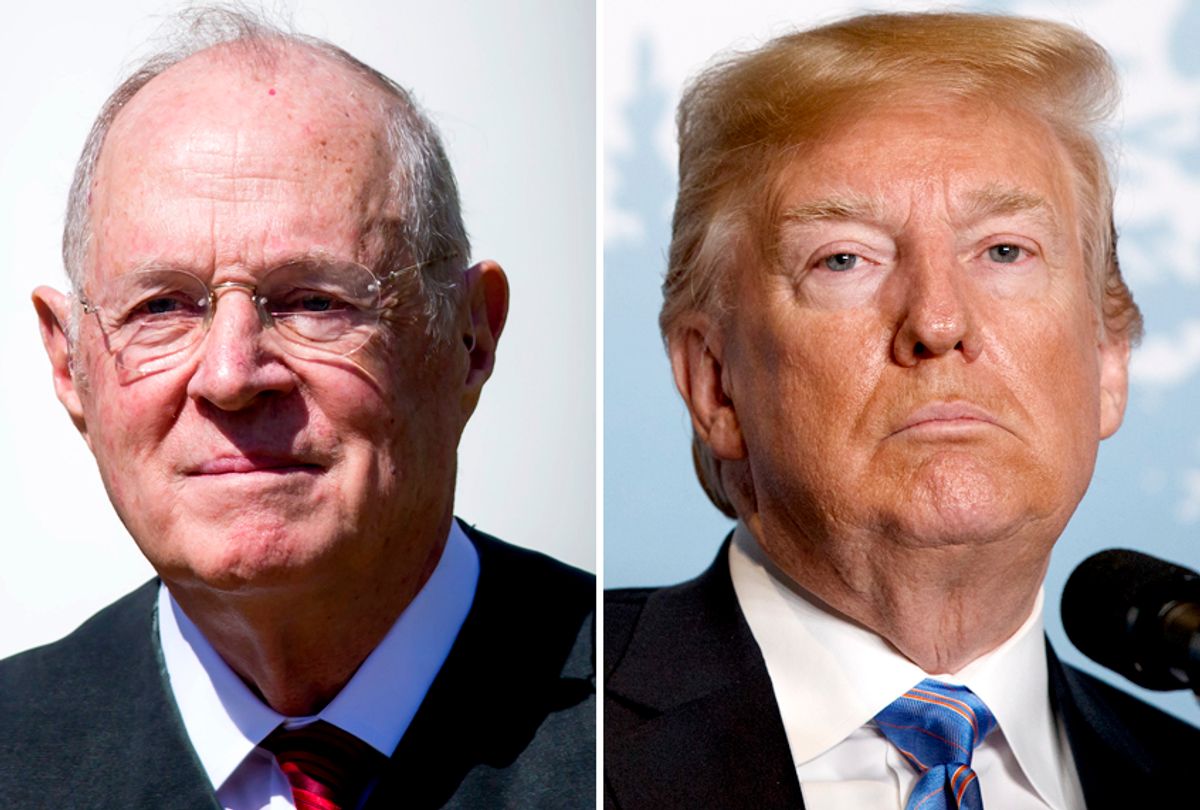 After President Trump made his first speech to Congress in February 2017, he was filmed showing his appreciation for U.S. Supreme Court Justice Anthony Kennedy.

"Your kids have been very nice to him," Kennedy answered.

"They love him, and they love him in New York. He's a great guy," Trump said.

A new report suggests, however, that the Trump family's relationship with Justice Kennedy's family may extend beyond such pleasantries.

In a recent New York Times article about "the White House's campaign to create a Supreme Court opening," Justin Kennedy, who Justice Kennedy's adult son, may have been more responsible than anyone else for saving the Trump family's business during the darkest days of the Great Recession.

"[Justin] worked closely with Mr. Trump when he was a real estate developer," Adam Liptak and Maggie Haberman reported, citing two people with knowledge of his role. The younger Kennedy spent more than a decade working in a senior role at Deutsche Bank.

"During Mr. Kennedy's tenure, Deutsche Bank became Mr. Trump's most important lender, dispensing well over $1 billion in loans to him for the renovation and construction of skyscrapers in New York and Chicago at a time other mainstream banks were wary of doing business with him because of his troubled business history," Liptak and Haberman continued.

The business relationship between Justin Kennedy and Trump was previously reported by the Financial Times, which wrote last year that "Justin Kennedy, a trader who arrived from Goldman to become one of Mr. Trump's most trusted associates over a 12-year spell at Deutsche, is the son of a Supreme Court justice."

While there's no proof that Justin Kennedy's business relationship with Trump influenced his father's decision to announce his retirement at a time when Trump is positioned to be able to pick his successor — and after a term in which Kennedy handed conservatives many victories in cases dealing with issues like Trump's travel ban and abortion — some observers noted the seemingly peculiar connection.

MSNBC host Stephanie Ruhle, who worked for eight years at Deutsche Bank before joining the news network, cautioned about reaching conclusions because there are multiple parts of the bank that "can easily get confused and lumped together."

"While I know and it has been well-reported, Deutsche was a massive lender to Mr. Trump, I want to put a new context," she said. "A lot of this comes from multiple sides of the bank, specifically the private bank, and that was not where Mr. Kennedy worked."

Citing two former members of senior management, Ruhle said, "a lot of the recent lending comes from the private bank...most of which was done after Justin left the bank."

"The business Mr. Kennedy ran was part of a real estate team that did some business. It was not part of the private bank business," Ruhle continued. "To say that he was the point guy that lent all of this money to Trump, I think, is short-sided. It's a lot more complicated."

"Stop devoting energy & attention to it," Avenatti tweeted. "He retired as was his rt. It doesn't matter why. What matters is what to do about it and how to avoid serious consequences for the next 30 years. #Basta"

Trump's latest financial disclosure revealed he still owes up to $175 million to Deutsche Bank. In March, the New York Times reported that special counsel Robert Mueller has subpoenaed the Trump Organization for information about the loans.