Let's ask this one more time, slowly: Why is Donald Trump so delighted to do everything Vladimir Putin wants? 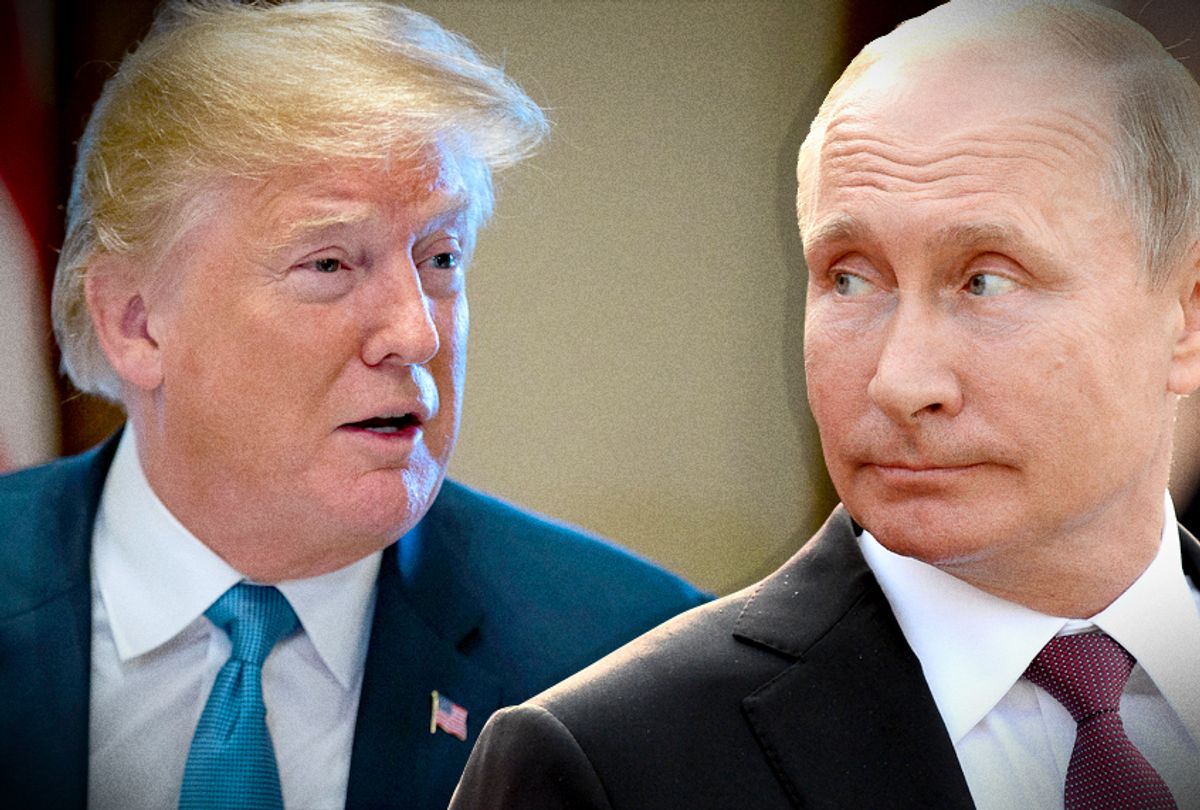 Donald Trump finally got his summit with Vladimir Putin. He's been pushing for it for months, seeming nearly desperate in recent weeks to get private face time with the Russian president. The last time they had a private chat was at the G20 meeting in Germany nearly a year ago. Much has happened since then. The boys have a lot of catching up to do.

We don't know exactly what's happening with special counsel Robert Mueller's office because his staff doesn't leak. But you can't help but get the feeling that the president and his congressional henchmen know something because hey are behaving with more manic intensity than usual. On Thursday, House Republicans grilled FBI Director Christopher Wray and Deputy Attorney General Rod Rosenstein as if they were suspected of being moles for al-Qaida. It was bad enough that Rosenstein, who has always come off as a very measured fellow, almost lost his temper with the Rep. Jim Jordan, a Freedom Caucus Republican from Ohio:

Accusing the deputy attorney general, who was under oath, of a cover-up as part of a convoluted conspiracy theory to conceal the president's collusion with the Russian government is one of the boldest examples of "working the refs" the GOP has ever conceived. Some Republicans are clearly trying to make the FBI and DOJ second-guess all their actions and look over their shoulders, at the very least. At worst they're laying the groundwork to give the president a phony basis on which to fire the investigators. Whatever their ultimate plans, they are frantically picking up the pace.

President Trump tweeted this before the hearing:

After all this time, Trump continues to say that the Russian government had nothing to do with the election interference, which even his lockstep defenders in Congress have accepted as fact. Indeed, it's almost as if that's become some kind of signal:

Considering the pressure Trump is under from the Mueller investigation, scheduling a summit with Putin and defending him publicly is a bizarre strategy unless he needs to communicate something. But he seems almost desperate to deliver something as well.

It was also odd that Trump stood on the White House lawn on his way to the G7 Summit in Canada and, with no prompting, declared that he wanted Russia back in the group. This wasn't on the agenda or near the top of anyone's list of important issues. Again, Trump is under investigation for possibly conspiring with the Russian government so it is extremely peculiar that he would bring this up unless he felt compelled to do it. He discussed it again at the meeting, and apparently that was more contentious than we knew at the time.

Axios has reported that Trump said of the upcoming NATO meeting, "It will be an interesting summit. NATO is as bad as NAFTA. It's much too costly for the U.S." (He said this right after his fatuous comment that Crimea belongs to Russia because everyone there speaks Russian.)

Trump has been complaining about NATO countries failing to pay up since he began his campaign for president, so that's nothing new. According to the New York Times, he is under the misapprehension that  "there is some NATO treasury to which members owe dues, and that allies are behind on their payments." In fact, each country sets its own level of military spending and it has gone up approximately $87 billion in the last four years. (I think the Times may have Trump wrong on this. He thinks NATO members pay the U.S. for "protection" and he wants them to pay more.)

Whatever Trump's reasoning, in light of his affinity for the Russian president one can't help but wonder if this tiresome riff won't end up being his excuse for ending the alliance, much as he tore up the Paris climate treaty and the Iran deal. European allies are certainly worried about this possibility, and there can be no doubt that would please Vladimir Putin very much.

That's not the only "deliverable" Trump has been trying to collect in advance of the big meeting. CNN reports that Trump privately brought up the idea of pulling U.S. forces out of Syria with King Abdullah of Jordan because he "believes he can strike a deal with Russian President Vladimir Putin on a so-called exclusion zone in southwest Syria that will allow the US to 'get out ASAP.'" This would no doubt please Syrian president Bashar al-Assad, who is allied with the Russians, as well as the Iranian government.

As Josh Rogin of the Washington Post has reported, Trump has done his best to destabilize the European Union, which is also a goal useful to Putin. Evidently, when French President Emmanuel Macron visited the White House Trump suggested that France should leave the EU, telling Macron that he could get a better deal directly with the U.S. (That suggests such profound ignorance that it's hard to believe Macron's head didn't explode. Like the rest of us, he has to deal with the man.) At a rally just this week, Trump said, “The European Union, of course, was set up to take advantage of the United States, to attack our piggy bank,” which is nonsense.

As Rogin points out, Trump has been dismissive of American allies since he began running for president, but he's lately gotten much more aggressive about it. Even though Secretary of State Mike Pompeo and others have tried to play down his contemptuous attitude, the rest of the world is no longer sanguine that it's all bluster. It appears to be the case that the president of the United States really is hellbent on rupturing long-standing American alliances in ways that will benefit Russia.

As far as we know, he has yet to ask anything from the Russians in return. Even if he did, he would probably make the same kind of deal he made with North Korean dictator Kim Jong-un -- give up something valuable in return for some glad-handing and a televised pageant. It was reported this week that new satellite imagery indicates that North Korea is rapidly upgrading its nuclear research center. Oops.

Trump can't seem to resist a strongman. They dazzle him with their attention and their "respect." But even by those standards Putin seems to be a special case. Trump is now racing against the clock to deliver something tangible to the Russian president, even though the political risks are monumental to him and to the country. One has to wonder whether he's trying to beat Mueller's investigation or Putin's deadline.