"We are putting out a damn paper": Capital Gazette didn't let tragedy deter the delivery of the news 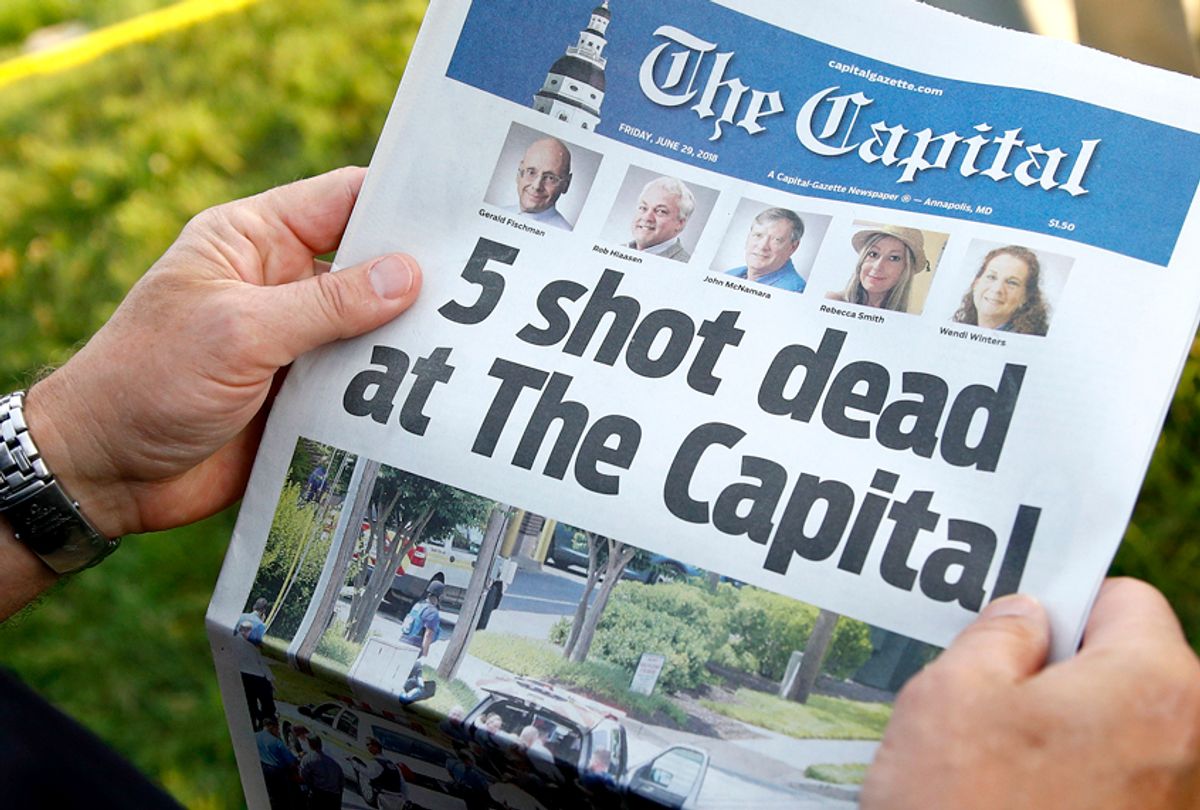 A copy of The Capital Gazette the day after the shooting. (AP/Patrick Semansky)
--

When Capital Gazette reporter Chase Cook — who was not in the building when a shooter sprayed bullets into the newsroom, killing five of his coworkers and injuring two others — tweeted a thread of information about the shooting Thursday, including the death toll and planned media briefings, the last thing many expected to see learn was this: "I can tell you this: We are putting out a damn paper tomorrow."

Somehow, journalists at the Capital Gazette continued to work through the tragedy they had experienced.

"I don’t know what else to do except this," Cook told the Baltimore Sun. The Sun, Capital Gazette's sister publication, added that his grief was visible.

Cook's next writing assignment became recounting the lives of his former colleagues.

Capital Gazette's next edition came out mere hours after the shooting, from a newsroom deep in mourning.

The front page showed the photos of the five employees who were killed, with the headline – "5 shot dead at The Capital" – blasted across the cover.

"We are heartbroken, devastated. Our colleagues and friends are gone. No matter how deep our loss is nothing compared to the grief our friends' families are feeling," Capital Editor Rick Hutzell said, quoted in the Maryland paper's front-page story.

The paper's editorial page was largely blank, except for a brief message that read:

Tomorrow, this page will return to its steady purpose of offering our readers informed opinion about the world around them, that they might be better citizens.

The ongoing coverage from reporters at the Capital Gazette speaks to the resilience of journalists, who remain committed to their jobs as truth-tellers and news-relayers even in the most harrowing of times.

"We are appalled by the shooting in the Capital Gazette newsroom. Newspapers like the Gazette do vital work, and our thoughts are with them amid this unconscionable tragedy," said Joel Simon, executive director of the Committee to Protect Journalists. "Violence against journalists is unacceptable, and we welcome the thorough investigation into the motivations behind the shooting."

Authorities named Jarrod Warren Ramos, 38, as the gunman responsible for Thursday's massacre. He unsuccessfully sued the newspaper and a columnist for defamation in 2012.

Phil Davis, a crime reporter for the Capital Gazette, reported that the gunman fired through the glass of the newsroom's doors.

"There is nothing more terrifying than hearing multiple people get shot while you're under your desk and then hear the gunman reload," he wrote.

Prosecutors claimed Friday during a bail hearing that Ramos had barricaded a back entrance so reporters could not escape.

"This fellow was there to kill as many people as he could get," Anne Arundel County Police Chief Timothy Altomare said during a news conference Friday in Annapolis, according to CNN.

Ramos was charged with five counts of first-degree murder.

"Journalists, like all Americans, should be free from the fear of being violently attacked while doing their job," Trump said Friday during a White House address. "Our warmest best wishes and regrets."

U-God: Machine guns have no purpose