In the early days of email and message boards, the enigmatic band saw an engaged community spring up around them 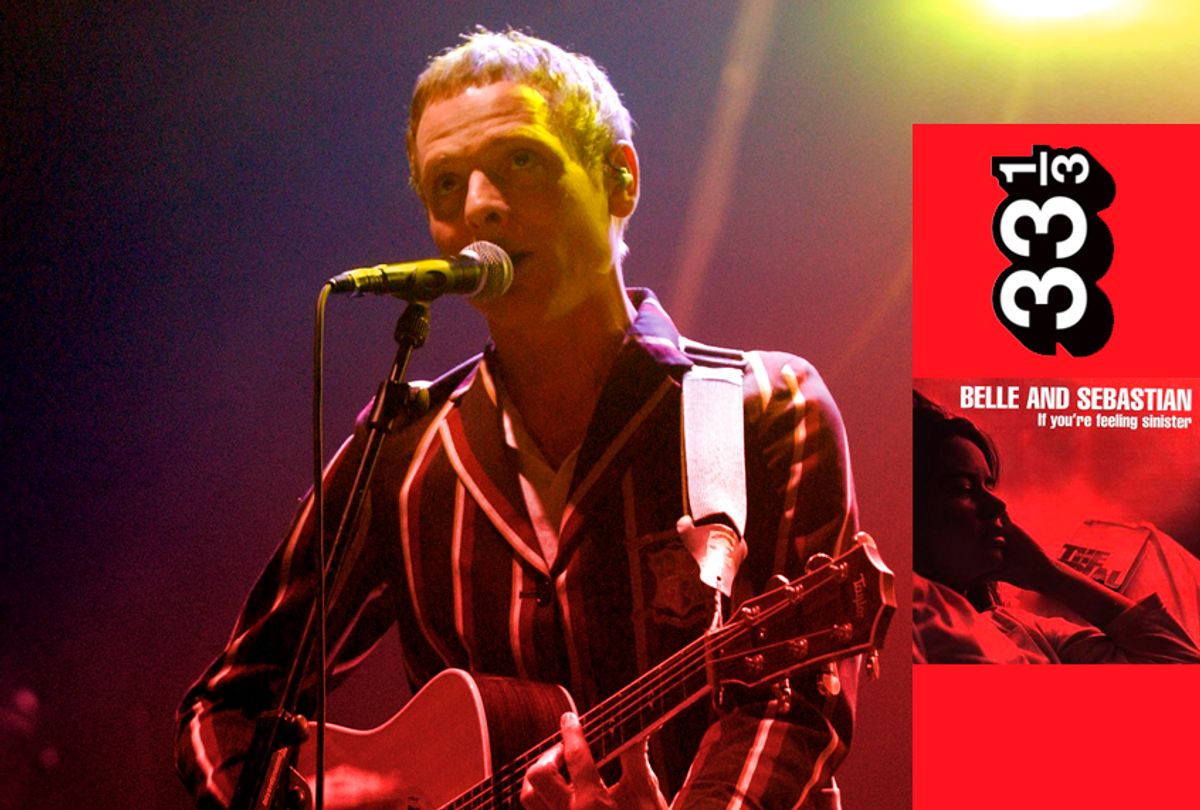 Excerpted from "Belle & Sebastian's If You're Feeling Sinister" by Scott Plagenhoef (Continuum, 2007). Reprinted with permission from Bloomsbury Publishing.

“Something is irretrievably lost when we are no longer in the presence of bodies making music,” John Philip Sousa once moaned about the invention of the phonograph. “The nightingale’s song is delightful because the nightingale herself gives it forth.” But with Belle and Sebastian, it became clear early on that all they’d give was their recordings and the occasional show. Their fans couldn’t investigate the group itself, so they made inroads into each other’s lives instead. This sort of audience-led, artistless existence was almost a throwback to the sheet music days, groups of amateurs sharing music as aficionados or fans rather than equating live music with professional artists. Instead of meeting in parlors or taverns, however, to recite and perform music, fans congregated in parks, bars, and cafés around the world to discuss it. In 1999, a London club night was held called 200 Troubled Teenagers (taking its name from the Belle and Sebastian song “Beautiful”), and even more than one marriage that had roots on this list (including my own).

In addition, photos were shared, online crushes were declared, and list members posted their own music or poetry. It was more like a community than a means to simply acquire information about a pop group. What’s more, it was, for most of its members, a heretofore unheard-of method of communicating with other music fans. As difficult as it may be to believe, email itself was relatively new at the time; the idea that you could share music and your thoughts about music with people thousands of miles away seemed potentially revolutionary.

Message board and mailing list culture, too, had yet not widely birthed trolls, flaming, or pointless provocateurs. The sheer novelty of the medium almost guaranteed an air of civility. The pissing contests and flag-planting that blackens contemporary message boards—fans priding themselves on being the first to introduce an artist to a community, and priding themselves even more on being the first to dismiss someone once they’re well known—was almost inherently absent from Sinister.

The list did provide an education to many—an alternate canon of indie guitar pop that placed artists like Orange Juice, Josef K, the Go-Betweens, Felt, the Magnetic Fields, the Field Mice, and handfuls of C-86ers and twee artists on pedestals alongside more widely loved bands like the Smiths, New Order, and Pulp. But it functioned more as a place where people engaged in conversations about each other’s thoughts and ideas about music rather than merely their record collections or the contents of their external hard drives. Fans dissected the group from every possible angle, posting theories, emotional reactions, and stories of the music impacting events in their lives.

With this sort of discourse so new—people engaging with others online for the first time—many different music fans were being introduced to one another. This was, of course, more true on non-band-specific boards of the time, but in each of these new mailing lists or boards, with new communities forming, conversations about music tended to start with general topics rather than specifics, and with so many different sorts of pop fans colliding for the first time, many were forced to consider or defend their core beliefs about pop music, those who make it, and what happens to it when it enters the public sphere. The myths of common sense and conventional wisdom were challenged; pop narratives and legends that were largely untold in certain nations were now shared in borderless populations.

This sort of critical utopia would be played out on a larger scale around the turn of the millennium, when internet music conversation’s floodgates opened. Different sets of fans—indie rock hipsters, pop kids, home electronic music or hip-hop heads, dance music lovers, noise guys, metal dudes—met in communal spaces and, in many cases, first had lengthy conversations with one another about music. Engaging with each other on text-only boards, without being able to see who you were “talking” to, meant that stereotypes surrounding subcultures were mostly stripped away, and individuals interacted with one another’s writing and ideas free of knee-jerk reactions to dress or appearance.

No type of music benefited from this more than pop, which had quite a few of its worst strawman arguments—a singer needs to write his own songs, music made for the head is more important and worthy than that made for the heart or hips, indie labels inherently make better music than major labels, music with commercial aspirations is soulless, to list just a few—punctured by intelligent thinkers and persuasive evangelists.

It helped, too, that this was an exciting time for western pop on both sides of the Atlantic—probably the best in nearly twenty years. There was not only plenty of thrilling chart music being made, but many artists worth discussing and theorizing about: hip-hop became synonymous with chart pop and dance music in the US; Eminem sparked debates about morality in music; the New Rock Revolution and the Strokes roused interest in back-to-basics sounds, which raised questions (again) about whether rock itself could still produce something new and thrilling; Radiohead attempted to lead guitar pop out of its necrophiliac slumber; a new era of teen pop earned a large number of adult fans; IDM and glitch morphed into minimal techno; and southern rap, garage/grime, bhangra, and dancehall formed a sort of rhythmic Diaspora.

Issues surrounding the business and technology of music, too, sparked debate, including the effects of filesharing and leaks on the industry; homemade mashups and the rise of dilettantism in music fans; mp3 mixes, blogging, ezines, and the democratization of tastemaking; and the lessons learned or exaggerated by the major-label flubbing of Wilco’s critically acclaimed "Yankee Hotel Foxtrot."

For its part, the Sinister List fulfilled Murdoch’s pleas to his characters for patience, transforming yearning into belonging and providing a sanctuary and social outlet for dozens of kids in small towns across the world who otherwise may have felt they held a private obsession. This alone could have ruined some of the magic of the group were it not still up to the listeners themselves to interpret and contextualize its music—both online and in person. And they did, sowing the seeds for a type of hyperparticipatory culture—a mix of the transformative and rapid power of new media and the deliberation and humanism of old media—that’s sadly today tilted almost completely toward living in a virtual space, where, collectively, we now have fewer reservations about spending our time.

The Scottish band, known for the hit “Take Me Out,” reveals its ability to make “dance-able” music.”

Scott Plagenhoef is the Global Head of Editorial and Programming at iTunes/Apple Music, and has written about music, film, TV and culture for Rolling Stone, Spin, Pitchfork, GQ, The AVClub, The Atlantic and others.