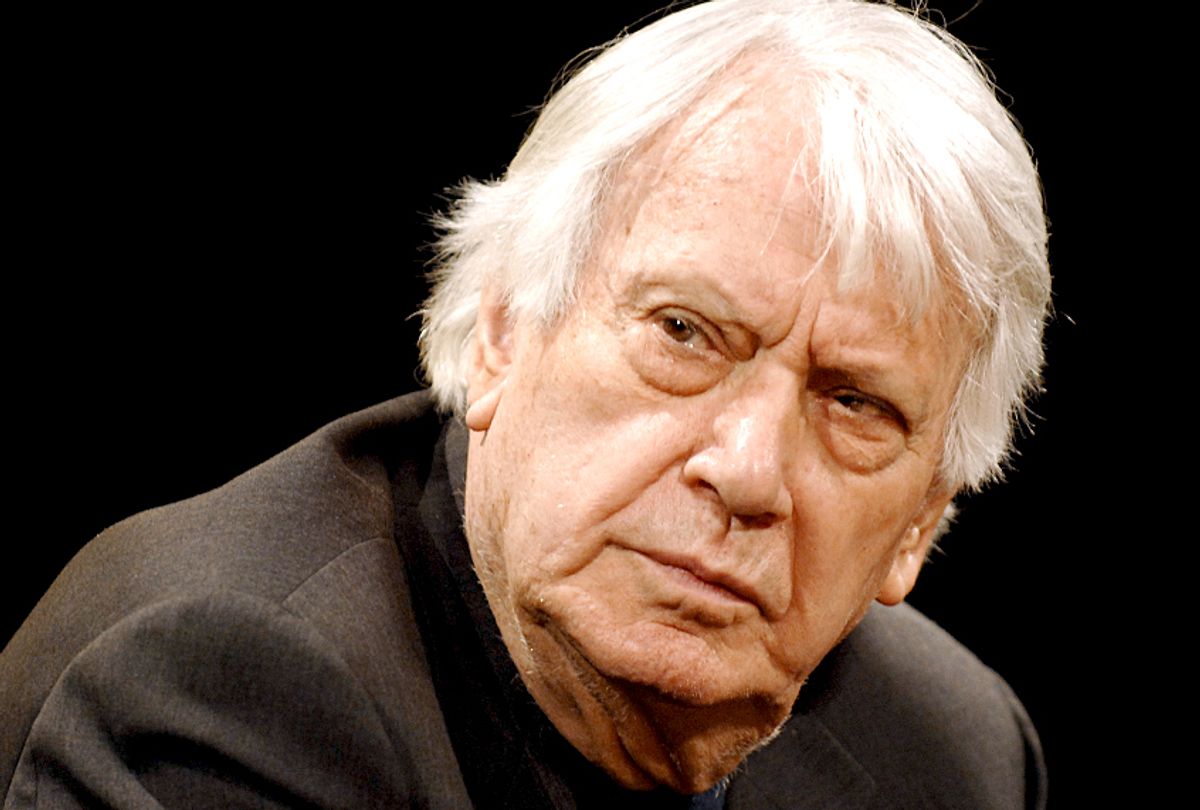 In his gripping, authoritative biography, Soledad Fox Maura reveals the tumultuous true-life story of the Oscar-nominated screenwriter responsible for "Z" and "The War Is Over," Jorge Semprún. Maura is a Professor of Spanish and Comparative Literature at Williams College. She has a PhD in Comparative Literature from the City University of New York, is a former Fulbright Senior Research Scholar, and has published two books and many articles on Spanish culture and history, and the Spanish Civil War.

On a warm Madrid evening in July of 2011, French philosopher Bernard Henri-Lévy addressed a packed auditorium at the Prado Museum. The occasion was a memorial service. The audience was interspersed with politicians, intellectuals, and businessmen who had interrupted their busy or leisurely lives to spend the evening in remembrance.

All of these were simply the multiple facets of one person: Jorge Semprún, an individual whose life spanned the twentieth century. “Interesting times,” as Eric Hobsbawn would say, Semprún rose to every opportunity and challenge presented by his epoch. The outcome was that he was able to live multiple, often contradictory, lives. For those who knew him, his death was more than a personal loss. It meant the disappearance of a key witness to the twentieth century, and of a figure who had become synonymous with Europe’s past and present.

Semprún had died a few weeks earlier in Paris, and the main memorial services had been held in France. Yet there was something especially moving about this homage at the Prado Museum, just a few blocks from where Jorge—and his mother before him—had been raised in peace and luxury, blissfully ignorant of the violent century awaiting them. Eighty-seven years later the same trees lined the Paseo del Prado, and the balconies of the former Semprún home looked out on quiet evening streets, impervious.

Like Picasso, Semprún was a twentieth-century Spanish icon of creative talent, political engagement, and intense personal magnetism who made France his adopted country. If he had been a painter, Paris might have honored him with a museum in a former hotel particulier in the neighbourhood of Saint-Germain-des-Prés. His first years in France were not easy as an adolescent Spanish exile who didn’t speak the language. But over the decades, he adapted and conquered the French language. The French came to cherish him, and showered him with opportunities, media coverage, and prizes. He became one of the resident stars of the Parisian intelligentsia, an elegant and aristocratic author, a hero and Nazi camp survivor. He was a dashing public intellectual sought after by French movie stars (Yves Montand) and politicians (Prime Minister Dominique de Villepin).

Shortly after the Spanish Civil War erupted in the summer of 1936, Semprún’s Republican family fled to France. In exile, the thirteen year-old Jorge learned French and continued his studies. He was a brilliant philosophy student. By 1939, the Spanish war had ended with Franco’s victory and the defeat of the Republic; World War II was destroying Europe. As soon as he could, Semprún joined the French Resistance, hoping that an end to Fascism would liberate Spain as well. He was arrested by the Gestapo in October 1943, and deported to Buchenwald, where he remained a prisoner until the American Army liberated the camp in April 1945.

His experiences as a deportee further cemented his political identity and solidarity with the Communist Party. He became an active militant, and rose to become a leader in the Partido Comunista Español. He spent many years as a brave and loyal clandestine agent, secretly organizing the youth of Franco Spain, but after expressing disappointment with the party’s strategy, he was expelled in 1963. Free from the enforced anonymity of his clandestine work, he immediately reinvented himself as a novelist and published his first book, about Buchenwald, "The Long Voyage." Over a dozen autobiographical works and successful screenplays would follow; most of them fictionalized memoirs that touch on his experiences in Buchenwald, most of them published in France by the prestigious publisher Gallimard and subsequently translated into numerous other languages. Only two of his books were written in his native Spanish.

Through his writing and the decades of interviews and lectures he gave, Semprún forged an international reputation as a moral authority, as someone who knew both the Fascist and Communist systems inside and out, and who had the education, time, and dedication to reflect on the crises of the twentieth century. He repeatedly contributed to the collective battle against forgetting the Holocaust by mining his own memories, and thanks to his oeuvre and political activity he was awarded the Jerusalem Prize, made a member of the Académie Goncourt, and given the German Peace Prize, among other honors. Felipe González, the first socialist President of Spain after Franco’s death, made Semprún minister of culture during his first term. Semprún is now widely recognized as one of Europe’s leading intellectuals and political figures from the last century and the beginning of this one, an eloquent and prolific witness to the horrors of World War II.

All of these factors came together to make Semprún a tailor-made hero for Post World War II and Cold War Paris: a man of action and thought, as much at ease with his false passports and the double-bottomed suitcases of his clandestine work in Franco Spain, as in the cafés of the Parisian boulevards, Les Deux Magots and the Flore, who broke with the Spanish Communist Party, and immediately became an award-winning author. Thanks to literary television shows such as Bernard Pivot’s "Apostrophes" and "Bouillon de Culture," Semprún became a household name in France.

He also became a public spokesperson for deportees and Nazi camp survivors. In Germany he was also revered. He wrote in French and lived in Paris, but he was Spanish and he was not Jewish. His point of view was unique.

Semprún’s work is largely autobiographical, yet the fact that it draws inspiration from his experiences should not lead us to assume that it gives us a complete or historical picture of his life. On the contrary, he was outspoken about his right as a novelist to blend fiction and fact, and we can be sure that he freely embroidered, invented, and omitted. To date, there has been no in-depth study that contrasts Semprún’s actual experience with his literary work that examines the enigmas and paradoxes that made up his life. We know a great deal about what he said he did, but we know very little about what he really did, or his motivations. It is perhaps only now, since his death, in the absence of his powerful persona, that it is possible to peruse certain sources and reflect on his legacy with some distance. How do his narratives move between historical fact and his brilliant literary self-fashioning? Are there patterns?

Though Semprún rebuilt his life in France as a deracinated exile forced to invent himself from scratch, I suggest that his political and literary ambitions were forged in his childhood in Spain. He liked to say that that the only thing he inherited from his family was his father’s copy of Marx’s "Das Kapital," but in fact he shared a profound political vocation with his father, grandfather, maternal uncle, and brother-in-law. The writer Juan Goytisolo has said of Semprún that, “Politics was in his genes.” It is important to contextualize his political roots and trace his family background to highlight startling parallels between Semprún’s life and that of his famous grandfather Antonio Maura, who started from humble Mallorquín origins but through determination and intelligence became prime minister of Spain for over two decades.

What was exceptional about Semprún’s life is not that it coincided with so many of the historical convulsions that defined his era, but that he involved himself so assiduously in all of them. Like his grandfather, Semprún went a long way in the political sphere, both as a professional revolutionary and as a minister of culture. And, like his grandfather, he preferred to lose everything rather than compromise his ideals. Semprún’s highly individual sense of integrity led him to sever ties with political allies, and his convoluted life in exile distanced him from family members. He survived several painful and definitive separations: with the Spanish Communist Party and the Spanish Socialist Party (PSOE); as well as with his father, his once-favorite brother Carlos, and his only son, Jaime. What was the personal price paid for these broken relationships? Was he a political chameleon? Did he consider himself a success or a failure? What was his relationship to power?

Throughout the distinct periods of his life there are themes that define his personality. In every context in which he found himself Semprún looked for a way to stand above those surrounding him. Of his seven siblings, he says it was he who his mother and father designated as the future writer and politician. He was the chosen son. In Paris in the late 1930s he was an exceptional philosophy student; in Buchenwald (1943–1945) his fluency in German and his office job in the camp gave him immense advantages over the other prisoners. Within the Spanish Communist Party (1952–1962), his sophistication and cultural level allowed him to become the legendary Federico Sánchez, the agent in charge of seducing bourgeois university students and turning them into anti-Franco activists. A wanted man, Semprún/Sánchez hid in plain sight in a Madrid crawling with police. For ten years he conducted his “clandestine” work with impunity, wearing elegant clothes and riding around in flashy cars, almost baiting the guardias civiles to catch him. These activities were risky, without a doubt, but also afforded him the most glamorous role within the party. He was never caught.