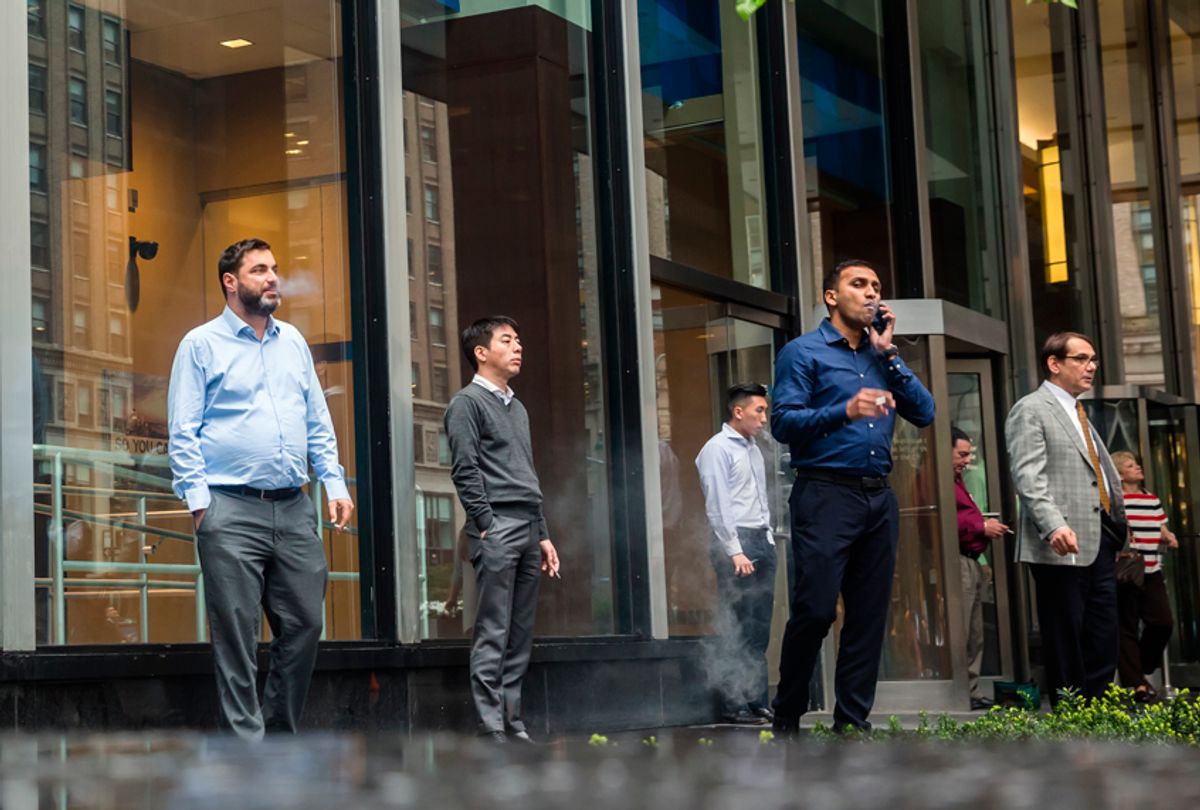 This article has been corrected since its original publication. The New England Journal of Medicine study discussed in the story was inaccurately described in the first version, and Dr. Scott Halpern's first name was incorrect. Salon regrets the errors.

Smoking is one of the few vices that is unilaterally agreed to be bad for one’s health. Indeed, smoking is the leading cause of preventable death, and a majority of smokers say they wish they could quit. Of course, quitting is notoriously difficult: nicotine is one of the most addictive drugs. So given that smoking is both a public health and a personal issue, who is best suited to help smokers stop?

The study tested various methods of smoking cessation -- e-cigarettes, incentives and drugs -- on more than 6,000 employees at companies across the nation. Through six months of trials, researchers found that the most successful method for cessation was financial incentives from employers.

Dr. Scott Halpern, a co-author of the study and a professor at the Perelman School of Medicine at the University of Pennsylvania, told Salon via email that researchers showed in a series of clinical trials that offering financial incentives of $600 to $800 triples rates of smoking cessation. That proved true regardless of whether patients were also given behavioral counseling or nicotine replacement therapy, and was true regardless of whether one looks at all smokers or merely those who are motivated to quit.

“It is debatable whether employers have a responsibility to provide incentives for smoking cessation for their employees, but it is clearly in their financial interests to do so,” Halpern wrote. That’s because smokers tend to be less healthy overall, meaning their health insurance expenses and premiums are often higher.

So if smoking cessation incentives will make their employees healthier and reduce company healthcare costs, why aren’t companies lining up to try the program? Turns out that there’s one big problem with that potential solution: non-smokers.

Dr. Steven Schroeder, the director of the Smoking Cessation Leadership Center and distinguished professor at the University of California in San Francisco, told Salon that instituting a policy of paying smokers to quit could cause consternation among non-smoking employees frustrated that their colleagues are being paid to abstain from behavior that they already do not participate in.

Still, Schroeder said one of the benefits is that it makes employees feel as though their employers are invested in their well-being. And employers benefit because non-smokers make for better employees.

“People who smoke have a higher absentee rate, and if their health insurance is experience rated, it will drive up the premium,” Schroeder told Salon.

Schroeder also said incentives for smoking cessation must fall on the employer -- as opposed to the government -- because expecting the government to do anything in a timely manner, he told Salon, is currently politically unrealistic.

"I think under our current political situation, it just wouldn't happen,” Schroeder told Salon. “It won't happen soon, and in the meantime we still have 37 million smokers, many of whom work, and 500,000 deaths a year from smoking. So there's an urgency, and just to say 'someone else ought to do it' isn't the answer."

In regard to this trial itself, Schroeder noted there were low cessation rates overall, most likely due to the fact that the study surveyed all smokers -- not just those who were interested in quitting to begin with.

However, despite the low cessation rates, researchers were still able to deduce what is and what is not effective. Halpern wrote that the study displayed how ineffective alternative smoking cessation options are compared to financial incentives.

“This study provides the best evidence to date about the effects of offering free cessation aids or free e-cigarettes to all people who smoke,” Halpern wrote to Salon. “Unfortunately, it is pretty clear that neither of these strategies is useful.”