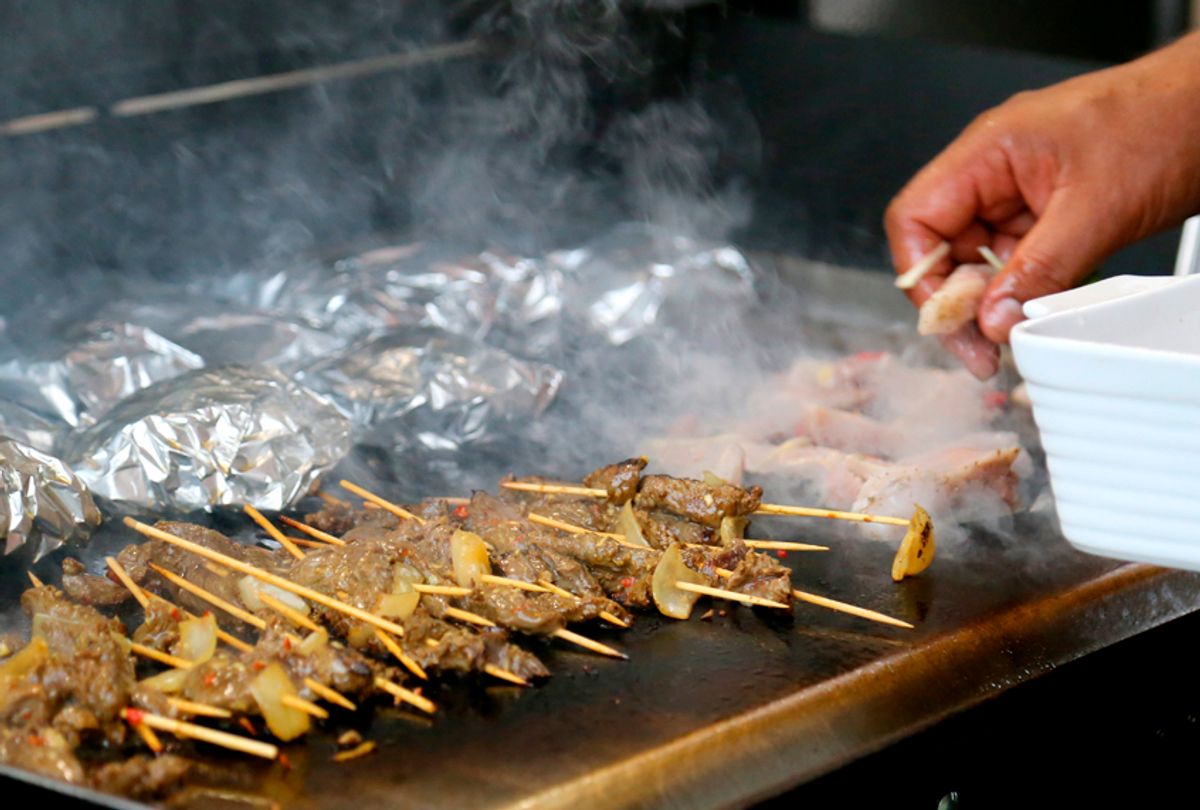 Go to Australia, but set your sights North. Keep going past the city lights, past the oddly common giant fruit statuary on the side of the road, keep going until it’s so red around you that it will take a strong argument to convince you it isn’t Mars.

In fact, it’s not another planet, but it is the Northern Territory, which might as well be out of this world. Humanity reached this stunning, desolate landscape some 65,000 years ago where it flourished among the tropical savannas and the crocodiles and otherwise seemingly inhospitable characteristics of the land, sustainably perpetuating people and culture as part of the ecosystem, rather than masters of it, until colonization reached Australian shores a few centuries ago.

Despite the longevity of Indigenous culture in Australia, most tourist knowledge and interest in the Native people extends no further than boomerangs and didgeridoos, and even there exists a multitude of misinformation: Americans tend to see these items as gimmicky souvenirs, rather than the sacred items they are. With millennia of history to pull from, Australia’s Indigenous community has plenty more to offer visitors if they take it upon themselves to look deeply. And once you’ve taken the time to look at Australia beyond a Bondi Beach sunbath or working up the courage to ask what “root” means, you will see the breadth of what this country has to explore, particularly when it comes to food.

Just look at Joe Hill and Angie Perry-Mansell, the couple behind Dreamtime Bakehouse and Grow Tours, Darwin-based businesses that have a flavor all their own. A quick look at Joe and anyone would see what they think an Aboriginal man looks like. But when you try his food, you taste rich, nuanced cultures, a surprising intersection of Aboriginal traditions with Chinese flavors, that goes far deeper than any fusion restaurant could attempt. Joe is of Aboriginal and Chinese descent, and the fact the he exists at all is remarkable, given the history.

Colonial Australia was not kind to the people living on the land they took over. Neither was life so great for the Chinese immigrants who came to Australia for gold in the mid-1800’s, and later to build the railroads. Both groups were at the mercy of white supremacist policies, and in this shared oppression, they found solidarity in each other. In that coming together, Joe’s ancestors met, married, and eventually gave life to Joe himself.

“Both groups were oppressed by European Australians,” Joe shared with Salon in a video interview. “My father, when he was growing up in Darwin in the late 1960s, told me a lot of aboriginal families denied their origins on the census.” This was when Australia was in full swing with the Assimilation Policy, which categorized people based on the color of their skin. “If it was a white mother and Aboriginal father, you’d be noted as a half-caste. The concept was to remove those children [from their natural families] and whitewash them.”

Chinese foreigners were not immune from the damage of this legislation, either. “The policy discouraged immigrants who wanted to come to Australia: they had to take a citizenship test in their non-native language,” Joe explained. “They may be educated but they still didn’t understand the test. This was when the Stolen Generation was created.”

The Stolen Generation Joe refers to is “the forcible removal of Indigenous Children from their families,” perpetrated by the Australian government between 1910 and 1970. And “whitewashing” is a euphemistic way of describing what was going on: the goal was to eradicate the Aboriginal Australian culture. Aboriginal children, particularly “half-caste” kids, were literally stolen from their families and placed with white families. They were forbidden from speaking their native languages, forced to go by Anglo names, and shielded from their heritage by every means possible.

Angie comes from one of these stolen children: her mother was taken from her Aboriginal mom and forced to live with her white grandparents. And Angie’s own education perpetuated the same story of white superiority and Black inferiority at school, skirting around the 60 or so years during which the government kidnapped children. “I didn’t know about Stolen Generation until I was 10, and my mom couldn’t find a record of her adoption . . . then someone told her about a place you can go in Melbourne called LinkUp, which is a program for Aboriginal people to find their families.”

As much as people wish the food they try while traveling abroad was divorced from politics, modern Indigenous culture is intrinsically linked with Australia’s colonial history, so pretending that their recipes and dishes were simply willed into existence really misses the point and undermines the experience. Food is spectacular at being a medium through which we can explore a new place, its people, and their culture.

And in that shared oppression, the Aboriginal community welcomed Chinese immigrants, who had brought their tradition of gardens with them and were happy to share with the locals (Aboriginal Australians). Meanwhile Indigenous Australians were highly skilled hunters and foragers, and the intersection of these practices is found in Joe’s dishes.

“With all of our meals growing up we had rice because it goes further. We had a lot of fresh local vegetables,” Joe says of the Chinese additions to the food he ate growing up. “My menu has fresh barramundi that I’ll go out and spear, I keep mud crabs in the fridge, every now and then we collect the shellfish, the longbums (mangrove snails), then come home and cook it on the fire. For me that’s my cultural identity. If I don’t go and hunt for a while then I need to go out and hunt, kill something, and eat it. That’s something I’m proud I can do. My father taught me to do it. Because he was part of the Stolen Generation, they would have their rations in the missions, then still be hungry. So they’d go out with the old Aboriginal people, go hunt and have a big feed, sit at their campfires and feed. You need to know how to hunt to provide for your family.”

Other Chinese derivations can be found in the garden-grown vegetables and the flavors. “A lot of it is cooked with ginger, garlic, and Asian sauces.” And then of course, there is the cabbage stew, the subject of his family’s cooking competitions. “Through the generations that meal has been taken on by each family member, all of us are proud to cook our own style of it. When we have a family reunion, we have a cabbage stew cook-off.” Joe’s has graciously shared his own cabbage stew recipe, which can be found below.

There is not a deep well of records concerning the intermingling of Chinese and Aboriginal cultures, largely because the people taking notes back then were European, and disinterested in the relationship. In fact, many second-person accounts of these two groups describe them as antagonistic, while first-person Aboriginal perspectives are quite friendly and welcoming.

But even without written records, food is ready to tell the true story. “Food is way of reconciling the past and moving forward in the future,” Angie said. “It provides a vehicle for people to understand the history and the complexity of the family groups, the complexities of being controlled by government policy, and not having the food or the readiness that was available to white Australians. There’s this diverse menu that’s evolved because of those policies and practices, and one way to move forward, to reconcile the past, is to tell these stories and provide people the opportunity to enter into discussion some of these things about the Stolen Generation and about Chinese Aboriginal history.”

The Northern Territory is a land at odds with itself, encapsulating all at once that stereotypical Australian outback look popularized by Crocodile Dundee, while being home to a plurality of Indigenous Australians that have worked hard to reclaim that same land. The bush tucker, or hunted and foraged food from the wild, may be acquired the same way it was thousands of years ago, but today the flavors reflect the nuanced history that this special region has. To understand it, all you have to do is take a bite.

2 lbs. of blade or flat-iron steak,

one cup of Worcestershire sauce,

half a cup of soy sauce,

One cube of beef stock,

One cube of vegetable stock,

1 quarter of a cabbage,

one bunch of Swiss chard or spinach

Cut both garlic and ginger fine and put into a pot and shallow fry until golden brown. Slice the blade steak into one-inch long strips, and bacon into small squares and add to garlic and ginger. Let all fry in the pot for 1 minute.

Then add one cube of beef stock, an one cube of vegetable stock. half a cup of Worcestershire sauce and quarter cup of soy sauce.

Add a sprinkle of salt to taste and white pepper.

Mix meat and sauces together in pot and let simmer with the lid on pot until meat turns a slight red colour and becomes Tender. This may take 20 or 25 minutes.You can add water to maintain a level just covering the meat.

"This recipe reminds us that we are from big families and a cheat meal had to feed a lot of people, so every time we make it reminds us of our Chinese heritage and how we survived by feeding a large family at a very low cost," says Joe. "Chinese gardens were always a part of family life and having spinach and other vegetables were always readily available, and adding the cheap cuts of meat meant we could feed large families easily."