In "Set It Up," Taye Diggs loves playing a terrible boss and wants to film more rom-coms now

On this episode of "Salon Talks," Diggs speaks about his new Netflix film, the #MeToo movement and the shift in TV 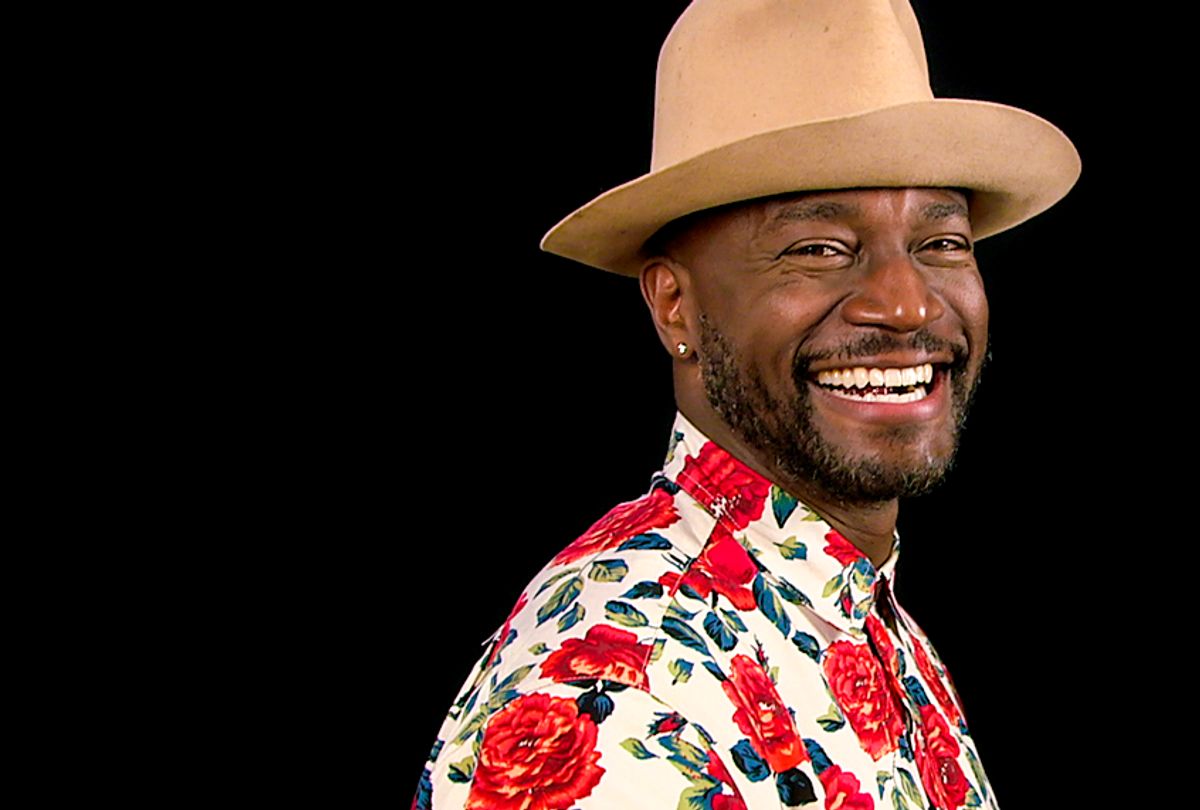 Actor Taye Diggs returns to his favorite movie genre, romantic comedy, in Netflix’s new film "Set It Up." Finding the sweet spot between rom-com nostalgia and a refreshingly original storyline, Diggs and his co-star Lucy Liu both play uptight, unrelenting bosses who overwork their powerless assistants. So the assistants come together and plot to set them up, in hopes that if their bosses find love, they will be less inclined to inflict terror on their assistants' lives.

The "Rent" and "Private Practice" star also has a slew of other projects in the works. He's starring in a new football-centered sitcom called "All American," out this fall on CW, is directing for the stage, and is in the process of publishing his third children's book, which centers on his personal experiences of co-parenting after divorce.

On a recent episode of "Salon Talks," Diggs opens up about having tough conversations with his son, the changing landscape of TV and Hollywood, and his take on the #MeToo movement.

The actor opens up about Hollywood, parenting, race and more.

One thing that really struck me while watching "Set It Up" is I don’t think I've ever seen you play an antagonist. Your characters have been complicated, prone to mistakes, needing some maturity, but never unlikeable like this character. What was that like for you?

Yeah, it was awesome. As you said, I haven't had an opportunity to play a character like this, and I just went for it. Luckily I had the freedom with the writing and the director, and the cast. . . They gave me the freedom and security to just go forward. There was just a lot of improvisation that was encouraged and it was great. It really inspired me to do, one: more film, and two: more romantic comedies. I was very invigorated.

Was it nice again to be working with Lucy Liu?

You guys go way back.

We go way back. She was my celebrity crush before I started — before I was a celebrity myself.

Now you also have a new show coming out this fall on the CW. It's about football, but it's also about race and where you come from, and identity. Talk about that show.

It's another project of which I'm very proud. I play a coach that started out in South Central, and then I end up coaching at Beverly Hills High School, and then the show picks up where I see this amazing athlete that is also from the wrong side of the tracks. I bring him over to Beverly Hills, and through him, and his experiences and my experiences, we take everybody on a trip, that demonstrates what you just focused on: It's socio-economic, identity, race, class, all of those issues. Then obviously because it's the CW, a certain element of a soap quality that keeps the viewers at bay.

It's based on a real story, right?

I feel like it's also incredibly pointed right now, in thinking about everything going on with the NFL, and protesting racial injustice and police brutality. It's also interesting to see a show that goes back to one particular player's upbringing to understand they're not just athletes or somehow outside of being human beings. But they have experiences that they are bringing with them to the NFL. They weren’t always rich. They weren’t always living in these wealthy communities.

100 percent. That was one of the reasons why I didn’t hesitate to jump at being a part of it.

One thing that I find interesting, too, in TV now, is I find that the landscape has changed so much. There's a  lot more money, better writers, A-list actors, diverse creators. You've been kind of back and forth between movies and TV forever. Talk about the shift, what do you make of it?

I'm just trying to kind of go with the flow, and I'm trying to kind of benefit from all of the positives in that. There is so much material out there, and it puts more people I think in the driver's seat. No longer are we kind of subject to what a studio or networks [wants]. People can just do shit themselves, and I think that's awesome.

I didn’t know that. . . I just saw a really cool TV show, about a cute little black girl in her life, and then come to find out that she has a whole history prior to that that I didn’t know about, which is great. She did that herself. She didn’t have to wait for somebody to say, 'OK, now it's your turn.'

Does it excite you as a creator that some of the gatekeepers are kind of coming down?

100 percent, even though I'm not doing it. I'm still going old school. . . I hope to one day to work with her and I don’t have to wait on someone else to give us permission. I think it's awesome.

Now one thing people may not know about you is you're also a children's author, of two books, "Mixed Me," and "Chocolate Me."

And a third one's coming up. Were you just about to say that?

I was going to ask. Tell us what this third book is about.

It's a favorite. It's a love letter basically from a parent to a child that they don’t see as often as they would like, and it's titled "I Love You More Than." It's inspired by my son and our relationship. I think it will resonate with a lot of families.

All of your books feel very personal, and like they're from experience, in thinking about identity, relationships. What has it been like to create them?

I almost feel like I can't really take credit because they were so personal. I just write what I'm going through, or what I think my son is going through and I'm hoping the stuff that I write will help other people as well.

Has this writing process made you a better parent?

I think is all does. One thing and I will admit this — well, with "Chocolate Me," that was my experience, and I couldn’t wait to share with my son my experience of like growing up chocolate in an all-white neighborhood, and how my mother showed me the ropes. But I realized that I rushed into that whole race conversation, maybe a little too early. Prior to me reading this book to my son, he didn’t know that there was any different.

So you mean his age?

At his age, he just had friends and I reminded him. I brought it to his attention, OK, there are people that look like this and like that, and you may be seen as different. It didn’t affect him negatively, but I did realize that it wasn’t until after I read him "Chocolate Me" that he started seeing the difference. So it's a learning process for me as well.

Have you addressed any other topics together, now that he's getting a little bit older?

Not yet. . . he's eight and he's in a very diverse school — he teaches me. A lot of times I'll be driving with him to school, and I'll curse somebody out in traffic. . . He will say, 'Daddy, maybe he's just having a bad day.'

That empathy that we lose sometimes as adults.

Oh yeah, so I'm putting that in my next book.

So now you've gone from Broadway to film. You've been on many stages, many arenas. What is left? What else do you want to do?

But I saw you're directing.

I am, yeah. So I had no idea that I would enjoy that so much, so I'm going to continue that. I bought some ambition in these past few years, and now I'm just trying to keep up with myself, creating behind the scenes as well. That's been exciting. It's difficult because I'm not used to it, but I'm digging it.

Now in Hollywood, which you've been in for a long time, I feel like there's at least two really important conversations happening. There's one tied to the #MeToo movement about sexual misconduct and gender, and there's also one about representation and equality. Whether it's thinking about trying to eradicate gender pay gaps or just thinking about diverse casting and inclusion riders, and also who's in front of and behind the cameras, as well as who are making the decisions; who has the seat at the table. What do you make of this time in entertainment?

I think first and foremost, it's exciting, I feel like it's all supposed to happen. I think a lot of amazing work is going to come out of this time. I do think personally and I think this is kind of what happens in society. Everybody is hitting everything really hard, and when that happens, I think people tend to kind of generalize and things fall through the cracks. I think it will work itself out, but I'm noticing that that's how society works very — in extremes.

I feel like as people we are very layered and complicated, and it's not all or nothing. I feel like through this we're going to realize that we have to pay attention to the person and individual circumstance, as opposed to all men are like this or all women are like this, and all women need to be treated — any man that looks at you like this means that. I think through this we're going to be forced to look at situations case by case. I think that's a good thing.

One thing that can be hard about that, being from any type of marginalized or minority group, I think is like when you've been oppressed or pushed down for so long and not allowed to speak, it can boil over.

Right, and so my hope is that it becomes less about individuals or even people, but changing things institutionally and systematically. That's often the hardest thing to get to. But if we think about the history of this country, often it was these mass movements that inspired the laws to change rather than the politicians.

We need it, it's necessary, yeah.

I do, in as much as I have to. You know what I mean? I try not to get wrapped up, because I try to focus on positive energy.

Yeah, but through that, as I said before, [there's] really great work. People are feeling a lot and they're expressing, I think from that really great art comes, so that that's when I kind of get involved.

Yeah, and help us to heal too. You think about the Nina Simone line and art reflecting the times.

The greatest art comes from strife, and we're in the middle of it now. As uncomfortable as it is, I am able to see greatness springing from it, and that's exciting.