The limits of #MeToo in Hollywood: Allegations have "limited influence" on audiences

If sexual abusers don't face consequences at work, they'll likely face none at all 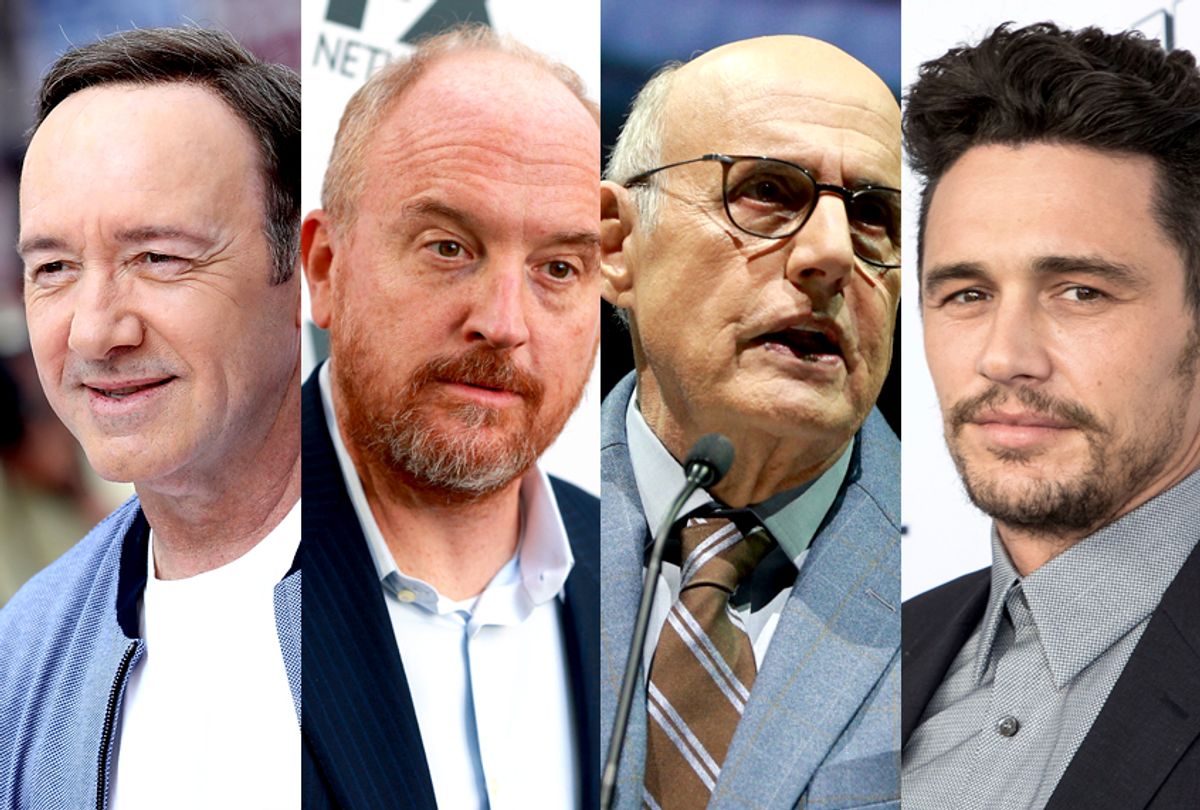 The effects of the #MeToo movement can feel substantial. Harvey Weinstein was arrested and indicted on rape and criminal sexual act charges. Powerful moguls and celebrities of all stripes are being outed almost daily for alleged sexual harassment, abuse and assault. And the conversation is changing. #MeToo is a topic at nearly every major award show and nuances of the issue are showing up consistently across the small screen, from late night shows to Netflix's "13 Reasons Why" and "Unbreakable Kimmy Schmidt," HBO's "The Tale" and BBC's "Killing Eve."

But there seems to be a ceiling to this reckoning. A new survey found "allegations of sexual misconduct or assault against an actor have limited influence on [a] U.S. audience,"  Joanna Piacenza of Morning Consult reported.

"In response to the reputational and financial risks associated with these allegations, many production companies and studios have downplayed these actors’ roles in films and television shows or even recast roles and reshot scenes after dismissing them from production," Morning Consult said. "A new national survey by Morning Consult shows the potential fallout from #MeToo allegations may be limited, at least as it pertains to the public’s viewership habits."

The survey asked viewers their likelihood of seeing a film or TV series featuring a specific, accused actor and whether the allegations against them made an impact on their decision. Out of the 20 entertainers listed, only the allegations against Kevin Spacey, accused of sexually assaulting a minor, and Louis C.K., who admitted to inappropriate sexual behavior, prompted respondents to say it would affect whether they tuned in.

When it comes to the 18 other accused actors, including Aziz Ansari, James Franco, Jeffrey Tambor, Dustin Hoffman, Casey Affleck and more, the survey's results concluded that the allegations against these men will have a far lesser impact on viewers.

Danny Deraney, chief executive of the Los Angeles-based public relations firm Deraney Public Relations, told Morning Consult that Americans have a short memory. "Time is your best friend," he said, noting Mel Gibson, whose anti-Semitic and racist remarks in 2006 and 2010, had little bearing by the time 2017 came around when he was nominated for Best Director for "Hacksaw Ridge." The Oscar-nominated film pulled in $175 million worldwide.

Another PR expert told Morning Consult that Americans are generally sparing to entertainers, especially ones they like. "The American public is pretty forgiving when it comes to bad celebrities," Susan M. Tellem, a partner at the Los Angeles public relations firm Tellem Grody PR Inc., said. "People forget, forgive, or don’t even know."

To the experts Morning Consult counseled, the results are clear: if the allegations against entertainers don't have much of an impact on viewers, then there is an unhindered pathway to their resurgence.

For those who understand the pervasiveness of misogyny and sexism in American culture and entertainment, these results are not particularly surprising. But it does directly counter the paranoia of mostly men who've labeled the #MeToo movement a "witch hunt" or a moral panic.

"Human interactions can be messy and complicated, and a national reckoning mustn't devolve into sexual McCarthyism," USA Today declared.

"There’s some people, famous people, being suddenly accused of touching some girl’s knee or something, and suddenly they’re being dropped from their program," actor Liam Neeson said on "The Late Show." "There is a bit of a witch hunt happening."

"This new puritanism colored by a hatred of men, arriving on the heels of the #MeToo movement, worries me," Australian filmmaker Michael Haneke said, adding that "the witch hunt should be left in the Middle Ages."

In court filings prior to Bill Cosby's retrial, his defense team wrote that the current climate is "increasingly hostile, and the jury pool is likely to be infected with prejudice," even though the accusations against Cosby were made public before #MeToo opened the floodgates in Hollywood.

To the detractors, the accumulating allegations against famous people — whether in entertainment, politics, news or the food industry — does not signal a culture systematically infected by misogyny but an avalanche. "There have been so many allegations that have come to light in recent months that quite literally we can’t keep up with them all," Evan Nierman, founder of the public relations and crisis management firm Red Banyan, told Morning Consult.

In "13 Reasons Why," star Kate Walsh profoundly declares that she doesn't know a single woman who hasn't been subjected to some form of sexual violence. In "Unbreakable Kimmy Schmidt," the eponymous protagonist played by Ellie Kemper says, "It's not like I'm a Weinstein, or a Spacey, or a the president," when trying to understand how she sexually harassed a coworker. "There's a reckoning going on, and it is important," co-star Tituss Burgess replies. "This is not about youuuu."

These moments are significant, but the survey's results are more evidence that despite the mountain of reporting, commentary and art responding to the #MeToo movement and the culture that has enabled it, the "witch hunt" narrative and the cries for due process are just convenient deflection.

Ramifications at work and the democracy of the internet are largely the only avenues that victims have for justice. The law has long been ineffective in punishing or holding rapists accountable, never mind sexual harassers or other perpetrators of sexual violence. And because of that, men have been mostly able to evade consequences. (Remember Stanford swimmer Brock Turner, who was convicted of sexually assaulting an unconscious woman, and yet, the judge didn't want to ruin his life: "a prison sentence would have a severe impact on him," Judge Aaron Persky said in the sentencing.)

If Morning Consult's results are accurate and production companies believe it, it could mean that they will be less inclined to take allegations of sexual abuse or misconduct seriously, meaning accountability for the vast majority of performers will still be fleeting. Perhaps most disappointing is that Deraney told Morning Consult that with time, viewers will forget the allegations against an entertainer or even become convinced of their "side" of the story. And the harm they've caused to the less powerful will become nearly invisible.

Can #MeToo kill the casting couch?