Sexual consent, beyond "no means no": "13 Reasons Why" season 2 breaks new ground

The overall merit of season 2 is highly debatable, but one scene enriches our discussions about sex and consent 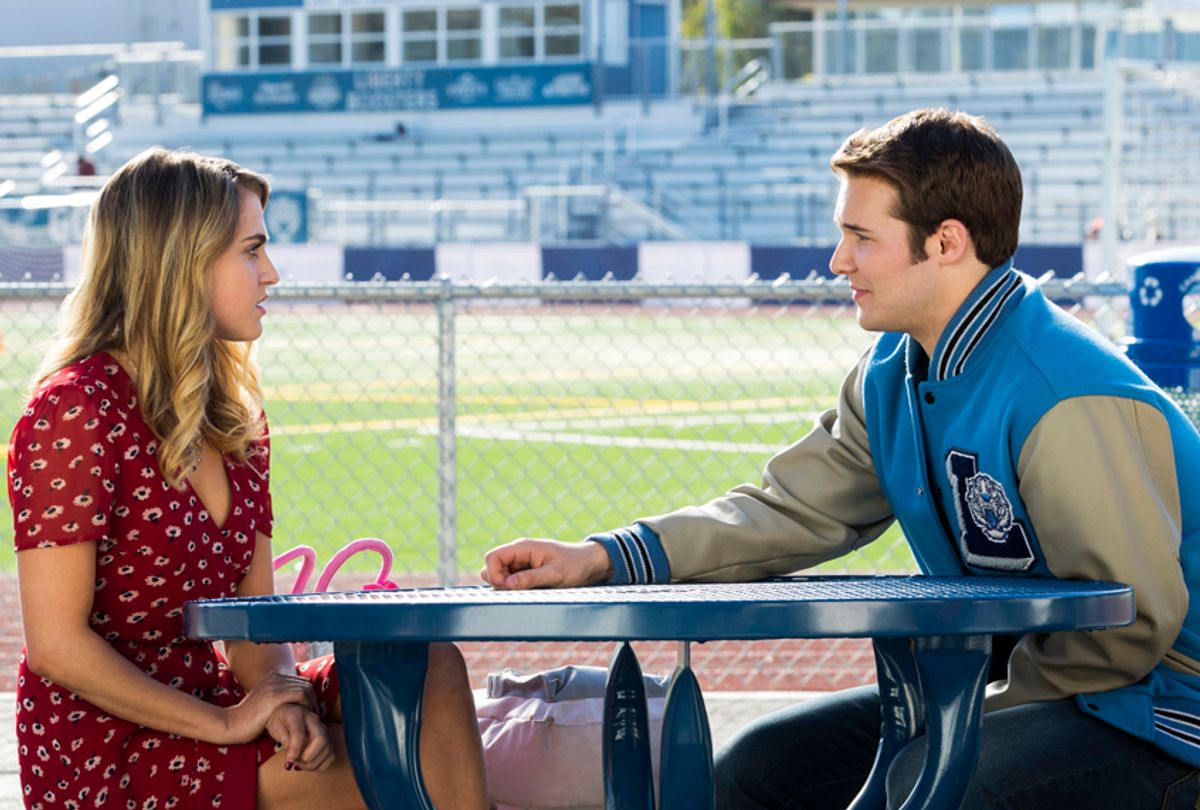 Spoiler alert: This article specifically discusses plot details about season 2 of the Netflix drama "13 Reasons Why." If you have not yet watched the new season, stop reading right now.

In a different season and on a different series, “13 Reasons Why” viewers would be primed to view Chloe Rice as the quintessential mean girl. The actress playing her, Anne Winters, plainly was cast for her all-American looks: blonde, doll-faced, the captain of the cheerleading squad.

She’s dating Bryce Walker (Justin Prentice), captain of Liberty High’s football and baseball teams, egged on by his band of loyal toadies who high-five his exploits and fear his wrath. Bryce and Chloe were made for each other, according to every high school film and TV trope sold to us since the 1950s.

Except for the part about Bryce being a rapist — not only that, but the rapist who assaulted Hannah Baker (Katherine Langford) and is named as one of the titular reasons that drove her to slip into a bathtub and slit her wrists.

Chloe dates him despite this, and despite what she decides is just a rumor that her boyfriend raped another girl she knows, Jessica Davis (Alisha Boe).

Soon enough, the writers of “13 Reasons Why” provide us with a reason not to dislike Chloe — well, besides her overtures of seeming friendly, or at least above it all, when it comes to Jessica: Chloe herself is one of Bryce’s victims. She just can’t acknowledge it, or doesn’t want to.

Concrete evidence of this surfaces late in the season, but the audience is made aware of Bryce’s assaults against Chloe long before this. Chillingly, some who witness one such act may think of it as one of those things that can happen on a movie night. That’s why the scene in question stands as one element “13 Reasons Why” got right in a second season full of misfires.

The explosive popularity and controversy surrounding season 1 of “13 Reasons Why” and its storyline, steeped in themes of teen suicide, made Netflix’s renewal a foregone conclusion. The question was how, exactly, showrunners Diana Son and Brian Yorkey could believably and responsibly continue a story that ran through Hannah Baker’s stated 13-part audible suicide note/manifesto in a single pass.

Where business demands it, television writers can find a way to expand upon any close-ended story. If “The Handmaid’s Tale” can continue past the final pages of Margaret Atwood’s literary classic, certainly Jay Asher’s 2007 young adult novel cannot be immune to expansion.

Besides, the theme of the sophomore run is already baked into season 1 in the form of what happened to Hannah: rape culture and the meaning of consent. The emergence of #MeToo only heightened the topic’s relevance as well, rendering the topic a touch less controversial than the series’ depictions of suicide and suicidal ideation. (Even so, public service messages that include mental health are included at the top of the series premiere as well as at the end of every episode.)

In the time span between the end of season 1 and the second season premiere, consent has become a regular discussion in the public sphere, even taking on a tenor of catharsis at times on social media. #MeToo exploded out of hunger for solidarity among survivors and through strangers sharing their stories, and our understanding of what constitutes consent continues to evolve.

And one of the most crucial revelations to emerge from this dialogue — one that’s ongoing — is how woefully insufficient it is to boil down the definition of consent to “no means no.”

This is where the tragedy of Chloe actually adds something to this conversation we don't often witness in serialized drama, in addition to sharpening the edges of Bryce’s pathology.

“13 Reasons Why” constructs Bryce to be this season's stand-in for former Stanford swimmer and convicted rapist Brock Turner, with his Liberty High jock squad styled to remind us of the infamous Steubenville High football team.

In the first season, we witness Bryce assaulting Jessica while she’s under the influence and cannot give consent, and later see Bryce forcing himself on Hannah even after she’s pleaded with him to stop. These are textbook examples of acquaintance rape, versions of which have appeared in a number of TV series over the years.

Chloe’s story adds another chapter to this catalogue that’s still not adequately addressed in popular culture: the fact that statements of consent don’t always match the truth of desire. We’ve seen this in the cloud of scandal that still surrounds Aziz Ansari and his alleged treatment of a woman he invited back to his apartment at the end of a dinner date.

The woman, who calls herself Grace, explicitly recalled on babe.net that Ansari pressed her physically and verbally to have sex very quickly after she went up to his place:

Throughout the course of her short time in the apartment, she says she used verbal and non-verbal cues to indicate how uncomfortable and distressed she was. “Most of my discomfort was expressed in me pulling away and mumbling. I know that my hand stopped moving at some points,” she said. “I stopped moving my lips and turned cold.”

Whether Ansari didn’t notice Grace’s reticence or knowingly ignored it is impossible for her to say. “I know I was physically giving off cues that I wasn’t interested. I don’t think that was noticed at all, or if it was, it was ignored.”

Later, after she indicated she didn’t want to have sex with him, she says Ansari pressured her into performing oral sex on him before she finally left. Ansari released a statement in which he maintains that he and Grace engaged in sexual activity but “by all indications [it] was completely consensual.”

Reading about such an experience is different than seeing an example of how something along the lines of what Grace alleges happened can occur, and occurs more regularly than men and women alike acknowledge.

Lili Loofbourow addresses this in a January 2018 story for The Week, written in the wake of the coverage of the allegations against Ansari. Addressing the question of why Grace did not exit the scene as soon as she felt uncomfortable, Loofbourow writes, “if you really want to think through why someone might have acted as she did, the most important one is this: Women are enculturated to be uncomfortable most of the time. And to ignore their discomfort.”

We often see examples of this ages-old idea, that women mostly see sex as something to endure. But, as she points out, what’s less examined is the fact that part of that endurance involves the acceptance that a woman’s pain or discomfort is often the price of male pleasure, even in the best of circumstances.

And if these new episodes of  “13 Reasons Why” can be said to have any fresh educational value, merit definitively exists in a telling scene near the close of “The Third Polaroid,” the seventh episode.

By that point in the season, Chloe’s loyalty to Bryce has been established, even though his actions are the central focus of a civil suit Hannah’s mother brings against Liberty High. He’s visibly affectionate with Chloe, as if campaigning to be crowned prom king and queen.

An earlier sex scene between Chloe and Bryce shows him being aggressive but in a way that could be interpreted as playful: She attempts to stop his advances but he keeps going, thrusting her against a wall. “You just take whatever you want?” she coos.

“You’re damn right,” he replies, slamming into her forcefully as her mouth hangs open in what looks like a studied depiction of ecstasy, something she’s probably seen a million times on TV. To the viewer, this doesn’t look romantic at all; we’ve seen Bryce taking what he wants under grimmer circumstances. Only in this case, he has a partner who, while not totally consenting, can play along and be compliant.

“The Third Polaroid” takes on a markedly darker tone: Bryce invites Chloe over to his place to watch a movie — again, that perfectly proper date scenario — but very quickly, he starts pawing at her and she gently rebuffs him.

She reaches for a sip of soda, as if to change the subject. But he takes it out of her hand and gets on top her. She insists she wants to watch the movie, one he’s chosen, but he disregards her again, admitting he chose it because he’s already seen it — he’d rather pay attention to her.

From that point, body language tells the truth of the situation: He pushes her down on the couch with his body weight, she makes a few weak attempts to push him off. He shoves his hand inside the front of her jeans, and she cries out. “Ow, careful.” “OK,” he responds, unbuttoning them. She looks at him, angrily. He responds with, “Is that better?”

Even as Bryce kisses Chloe, she’s still pushing him, turning her face away every now and then to look at the TV, as if she’s hoping he’ll take the hint. She tries to turn her body away. She weakly says, “Babe, what about the movie?” He doesn’t listen. He roughly yanks her jeans off, then her underwear. A flicker of fear darts across her face. This is not a girl consenting.

“You’re good, yeah?” Bryce says. “You want to, right?” Everything in Chloe’s body language tells us she doesn’t, but she knows what he wants to hear. “Right,” she replies softly. The camera locks onto her face as she keeps looking at the TV until she can’t ignore the pain.

Putting on my critic’s hat for a moment, season 2 of “13 Reasons Why” takes a dive in quality from the show’s first, which, for all of its flaws, remains a moving tragedy and a potent conversation starter.

It also had a strategic structural hook in the form of Hannah’s employment of cassettes, creating a bridge between kids and their parents, many of whom grew up in an era when tapes were the primary medium of emotional expression. The tapes are a provocative storytelling tool with a physical purpose, allowing Hannah to posthumously control her story by indicating who gets to listen to them and when. Analog media can be stolen, but not hacked; and the masters cannot be digitally manipulated by amateurs.

Season 2 employs Polaroid pictures as the breadcrumbs propelling along its feeble mystery. Along the way, it also leads us through Jessica’s journey as an assault survivor, indubitably the season’s strongest storyline. What happened to Jessica matters, and her efforts to move forward after her violation are halting and heartbreaking. Her story, however, is a framework we’ve seen portrayed before on a number of series.

The same can be said of how Chloe’s second season arc wraps, an all-too-conventional cautionary tale twist more adequate for a health class skit than a 13-episode drama: She reveals at the spring dance that she’s pregnant. (The same is true of the new season’s gun violence storyline, presented with all the subtlety of breaking glass.)

Returning to Loofbourow’s argument, what’s most important is the circumstances of how Chloe’s crisis began and continues. That’s a part of the story of what it feels like to be a woman in this world that many are still trying to understand, and is central to these new episodes of “13 Reasons Why.” And in this regard, Chloe’s small part in the drama’s imperfect plot may serve the new season’s highest purpose.

Salon 5: Catcalling is not sex ed

D. Watkins breaks down the five things boys need to know about consent.