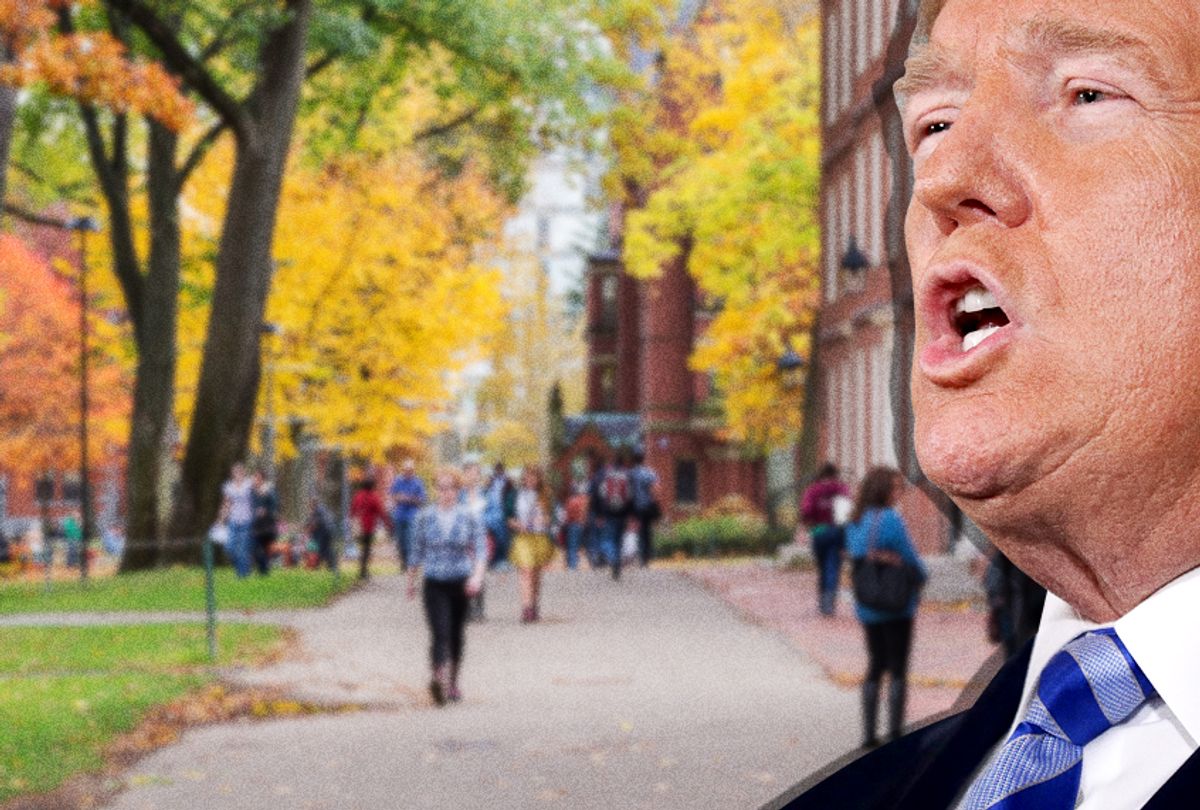 The administration is specifically targeting guidelines that were jointly issued by Obama's Justice Department and Education Department on two occasions — once in 2011 and then again in 2016 — which were intended to provide clarification for schools that wished to improve their racial diversity, according to The Wall Street Journal. As the article points out:

Trump administration officials plan to argue that the documents, published in 2011 and 2016, go beyond Supreme Court precedent on the issue and mislead schools to believe that legal forms of affirmative action are simpler to achieve than what the law allows.

Instead the Trump administration is going to tell schools that they should not use race as a criterion for determining whether or not to admit students, according to Axios. The site noted that there were seven policy guidelines from the civil rights division of Trump's Department of Education that were rescinded in total, with a spokesman for Attorney General Jeff Sessions telling The New York Times that the Obama-era policies could ultimately cause the Department of Justice to go beyond existing legal and constitutional parameters. One Justice Department official also noted that "rolling back guidance is not the same thing as a change of law, so that the decision to rescind technically would not have a legal effect on how the government defends or challenges affirmative-action related issues."

The Trump administration's recent affirmative action decision is occurring against a larger backdrop of conservative backlash against that policy, both within and outside of the White House. In August 2017, The New York Times reported that the Justice Department was going to focus on having its civil rights division go after colleges with affirmative action policies that are considered to discriminate against white people. When this policy was announced, a former top official in the civil rights division under Presidents Ronald Reagan and George H. W. Bush made it clear that he lauded the policy as a step toward rolling back affirmative action altogether.

"The civil rights laws were deliberately written to protect everyone from discrimination, and it is frequently the case that not only are whites discriminated against now, but frequently Asian-Americans are as well," Roger Clegg, who is now the president of the conservative Center for Equal Opportunity, told the Times in August.

His comment about Asian Americans alluded to a lawsuit brought against Harvard University by a nonprofit organization called Students for Fair Admissions in 2014. According to a report in June by The Wall Street Journal:

Harvard University and the organization accusing it of discriminating against Asian-American applicants each say race plays a role in the school’s admissions decisions, but sharply disagree about whether that constitutes evidence of illegal bias, according to court documents filed on Friday.

The filings are part of a lawsuit in Boston federal court brought against the Ivy League school in 2014 by Students for Fair Admissions, a nonprofit whose members include Asian-Americans who were denied admission to Harvard. The motions are effectively a preview for the trial in the case, which begins in October.

The lawsuit claims Harvard’s admissions process is unconstitutional and illegal under federal civil rights law because it intentionally discriminates against Asian-American applicants and holds them to a higher standard. The plaintiffs have said their goal is to reach the Supreme Court.

The filings, which contain hundreds of pages and rely on data for individual applicants to the classes that entered Harvard between 2010 and 2015, give the public the most detailed look ever at Harvard’s method for selecting its incoming undergraduate class.

In 2017, the Department of Justice began investigating Harvard University as well over its use of race in its admissions process, according to US News & World Report.

Ironically, during an interview with CNN in 2015 Trump criticized Supreme Court Justice Antonin Scalia for what he denounced as "very tough" comments about the African-American community regarding the affirmative action issue, according to The Hill. Scalia had stated during oral arguments for a case opposing affirmative action that racial minority students who aren't able to be admitted to top colleges would perform better at "less advanced schools." Trump's response?

He later added that Scalia's remarks were "very tough to the African-American community."

Another irony of Trump's current position on affirmative action is how it runs athwart certain inconvenient facts regarding his own political career. This was a point best illustrated by CNN's John Blake in January:

Conservatives have lectured women and people of color for years about the importance of meeting high standards. No "handouts" or "set-asides" allowed. Only the most qualified should get the job.

And then millions of these same people voted for a man some critics call the most unqualified president in American history. Trump is the only American president who came into office with no military or political experience.

Sometimes, they say, it shows.

This fall, Trump incorrectly stated that a stock market rally could reduce the national debt. He once said he admired "Article 12" in the Constitution (there are only seven). He also said that Andrew Jackson, the seventh president of the United States, was "really angry" about the Civil War. Jackson died 16 years before the Civil War began.

While it remains to be seen whether Trump will succeed in rolling back affirmative action policies in the long-term, it is noteworthy that the president himself benefited from unfair advantages that have not been the subject of nearly as much public outcry.