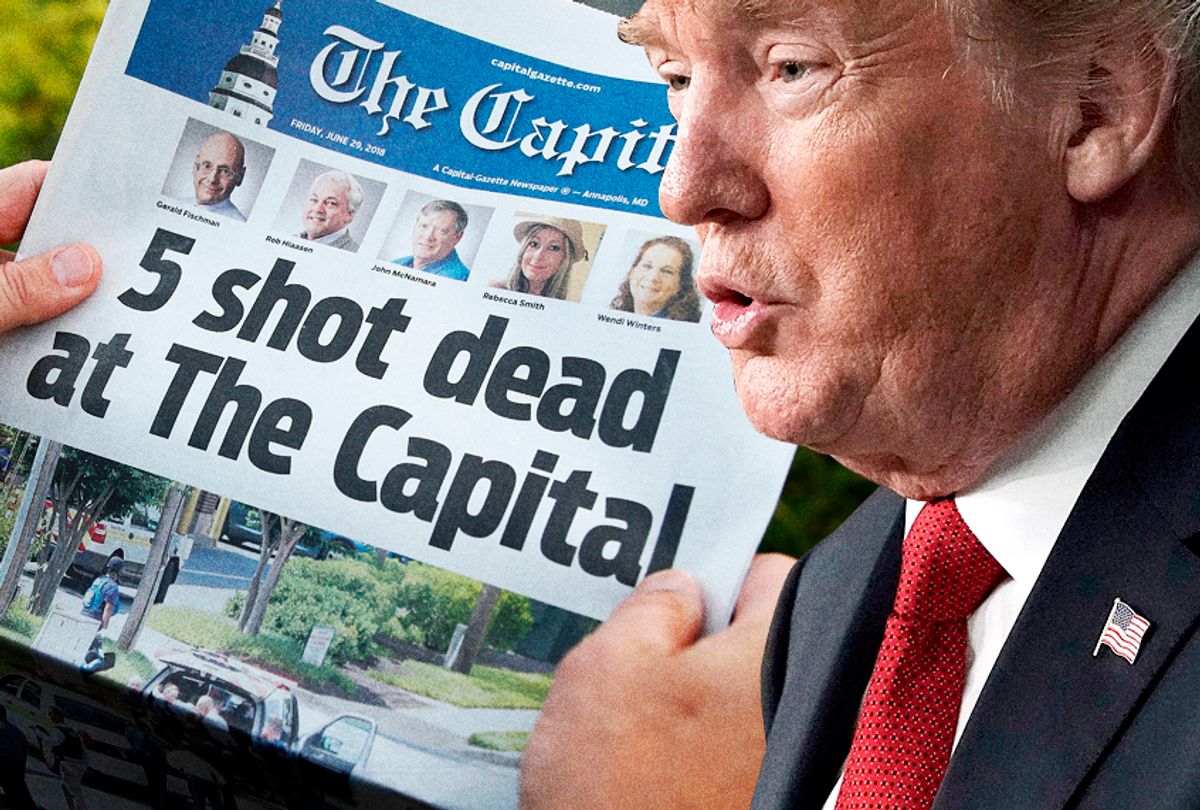 Early Tuesday morning, before most Americans had begun their day, President Donald Trump sent out a tweet attacking the media as "Fake News" — only five days after the deadliest attack on an American newsroom in modern history.

Slamming the so-called fake news as "the Opposition Party," Trump's tweet followed a familiar pattern that appeared to completely ignore the shooting deaths of five Capital Gazette staffers only five days before in Annapolis, Maryland.

A lone gunman opened fire at the Capital Gazette newsroom and appeared to have a long-running animus against the local newspaper. As Salon recently reported, the shooter's disturbing Twitter history shows connections to the far-right and hints of violence against journalists.

Trump's hostile rhetoric and frequent attacks on the press, going as far as to call the media the "enemy of the American people," did seem to tamp down a bit in the immediate aftermath of the fatal shooting. And on Friday, he described the tragedy at the Capital Gazette as one that "shocked the conscience of our nation and filled our hearts with grief."

"Journalists, like all Americans, should be free from the fear of being violently attacked while doing their job," he said.

On Tuesday, Trump issued a proclamation ordering the flags to half-staff to honor the newspaper staffers.

Our Nation shares the sorrow of those affected by the shooting at the Capital Gazette newspaper in Annapolis, Maryland.

As a mark of solemn respect for the victims of the terrible act of violence perpetrated on June 28, 2018, by the Constitution and the laws of the United States of America, I hereby order that the flag of the United States shall be flown at half-staff at the White House and upon all public buildings and grounds, at all military posts and naval stations, and on all naval vessels of the Federal Government in the District of Columbia and throughout the United States and its Territories and possessions until sunset on July 3, 2018

According to CNN, White House Press Secretary Sarah Huckabee Sanders said on Tuesday that Trump made the decision to lower U.S. flags after he heard about the Annapolis mayor's request. Trump's proclamation occurred, however, after Annapolis Mayor Gavin Buckley said the White House had denied his request to lower the nation's flags in honor of the five victims of the fatal shooting at the Capital Gazette newspaper,

"Obviously, I'm disappointed, you know? . . . Is there a cutoff for tragedy?" Buckley said, according to the Baltimore Sun. "This was an attack on the press. It was an attack on freedom of speech. It's just as important as any other tragedy."

"It's a horrible situation, but I think it’s the least respect we could give the journalists," Buckley said. "It's a little bit of comfort."

Maryland Gov. Larry Hogan had ordered Maryland state flags to be lowered to half-staff from Friday through sunset on Monday. But Buckley had said the tragedy in the newsroom warranted national attention. "It's not as noticeable when a state flag is down but you still have your main flags at full mast," he said. Only the governor of a state or the president can order an American flag lowered to half-staff, according to the U.S. flag code.

Through Maryland's congressional delegation, Buckley put in a request to the White House over the weekend to lower the U.S. flags.

Trump lowered flags to half-staff for previous mass shootings, including the recent rampage in Santa Fe, Texas that left 10 people dead and the mass shooting in Parkland, Florida in February, in which 17 students and teachers were murdered. He also directed flags lowered after the horrific massacre in Las Vegas that killed 58 and after a gunman opened fire at a church in Sutherland Springs, Texas, which left 27 people dead in 2017.

Five Capital staff members were killed in the shooting at the newspaper Thursday: assistant editor and columnist Rob Hiaasen, 59; Wendi Winters, 65, a community reporter and editor; editorial page editor Gerald Fischman, 61; editor and sports writer John McNamara, 56; and Rebecca Smith, 34, a sales assistant. The gunman was arrested and has been charged with five counts of first-degree murder.