Congress has abandoned its constitutional responsibility to declare war, under both parties and many presidents 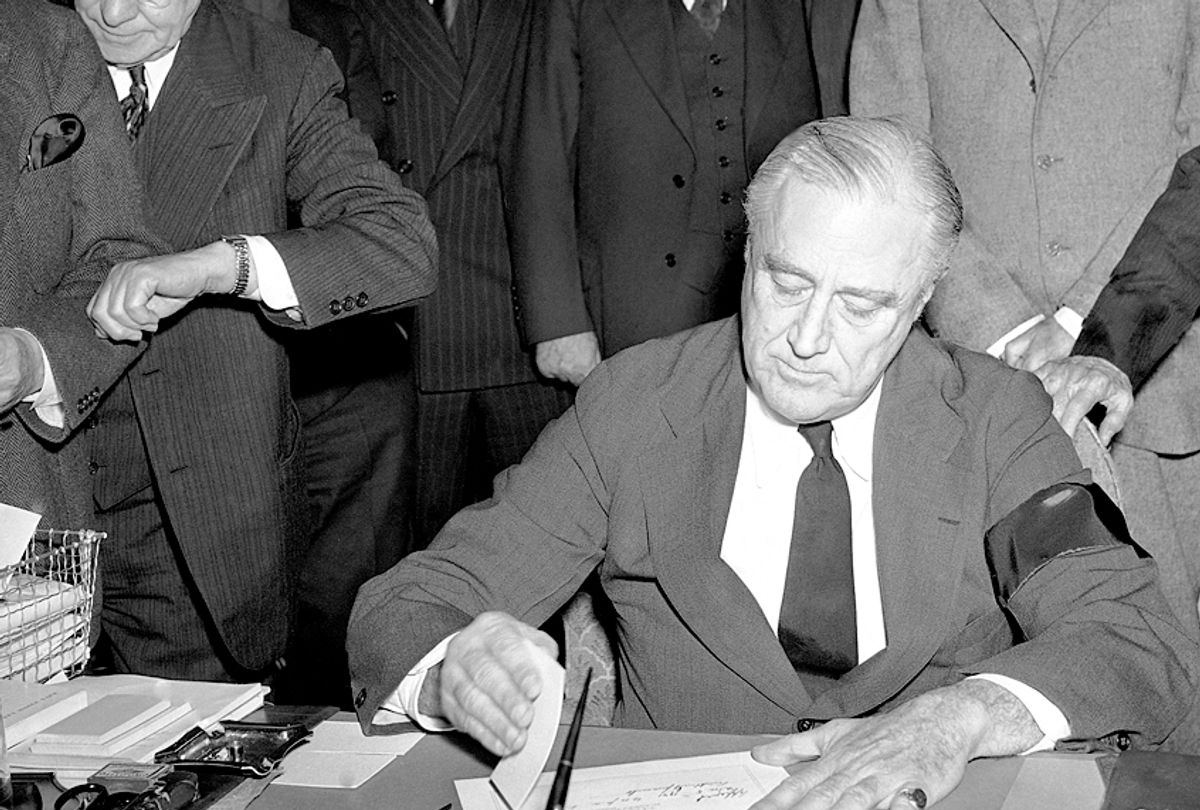 The Department of Justice Office of Legal Counsel (OLC) recently released its legal justification for the Trump administration’s April strike on Syria. Similar to actions undertaken by his predecessors, President Trump’s strike — in response to the Assad regime’s use of chemical weapons — took place without either congressional authorization or a formal declaration of war. And, similarly, OLC’s legal justification built on those of previous presidents for ignoring the legislative branch.

While the attack on Syria was a limited strike — with limited chance of retaliation against the United States — it raises questions about what Congress would have done had President Trump followed through on his threats to unleash “fire and fury” against North Korea. Former Rep. Mickey Edwards wrote emphatically last month that it was Congress’ decision whether the country would once again fight a war on the Korean Peninsula, not the president’s. Conservative commentator George Will put it more vividly in response to a suggestion by Sen. Lindsey Graham, R-S.C., that war with North Korea was the president’s call: “Note the senator’s clear premise: It is for the president to ‘pick’ between war involving millions of deaths, and peace. Congress, its arthritic knees creaky from decades of genuflections at the altar of presidential power, will be a gimpy spectator.”

The United States has not declared war since World War II, yet frequently uses military force abroad, for the most part, because it is politically costly for both Congress and the president to formally acknowledge a war — despite the fact that the framers of the Constitution put the war power in the hands of Congress precisely to avoid this outcome.

Since its founding, the U.S. has formally declared war 11 times. While it has legally authorized the use of military force abroad numerous times, Congress issued its last formal declarations of war on June 4, 1942, declaring war on Bulgaria, Hungary and Romania. According to the Congressional Research Service, the United States has used armed force abroad 243 times since its last declaration of war. While one could take issue with how instances of armed force are counted in the report, the number would still suggest Congress has abdicated its responsibility.

From a domestic perspective, politicians pay little price for failing to declare war. As Elizabeth Saunders explained in a 2016 round-up of scholarly work on foreign policy and electoral politics for the Monkey Cage, foreign policy plays little to no role in American elections. For example, Adam Berinsky has shown how the public follows elite cues when forming opinions on war and peace.While John Mueller has argued that wars are more likely to matter electorally as casualties begin to mount, voters still prioritize economic issues in presidential elections. As Saunders notes elsewhere, failing to take a formal position on a war is politically useful for members of Congress. Punting responsibility for declaring or authorizing war allows politicians to avoid the appearance of opposing a war that might prove popular if successful, or supporting a war that would be unpopular if unsuccessful. But given its lack of salience, American presidents are unlikely to pay any electoral price for failing to seek a declaration of war or authorizations to use military force — nor are members of Congress likely to pay any price for failing to hold a president accountable for that failure.

There are also international reasons — independent from domestic parochialism — that affect the likelihood that the U.S. will declare war. As Tanisha Fazal has demonstrated, the decline in formal declarations of war is a worldwide phenomenon. Fazal finds that the reason states are no longer inclined to declare war is the proliferation of laws governing the conduct of armed conflict. She argues that the increased number of codified jus in bello laws raises the compliance costs of formally acknowledging that states are at war when they use military force.

Both the domestic and international explanations point in a common direction: It is more costly to declare war than it is to avoid doing so. For those who believe that formal declarations of war will make it more likely that Congress will constrain executive branch war-making, this research suggests that they should focus on raising the political cost of initiating a conflict.

The desire to make it costly for politicians to initiate conflicts frequently leads to calls to bring back the U.S. military draft. An experimental study by Michael Horowitz and Matthew Levendusky does provide evidence for the proposition that the likelihood of opposition to a conflict increases with the likelihood that an individual or family member will be conscripted to fight in it. While the evidence Horowitz and Levendusky present is convincing, the resurrection of the draft is unlikely. Moreover, as Jim Golby recently noted, the U.S. still fought undeclared wars — and for lengthy periods of time — when the draft was operative.

As noted above, increasing numbers of casualties can impose electoral costs. However, as Fazal has explained, advances in modern military medicine are leading to fewer battlefield deaths. Advanced military technology also means smaller numbers of military personnel will be in harm’s way. Moreover, if casualties are increasing, hostilities are already under way and the horse has left the barn regarding debate over whether Congress should have declared war.

Recent research by Sarah Kreps, Jonathan Caverley, Rosella Cappella Zielinski and others looks at the role of war financing in alleviating the need for American society to bear the costs of war. Kreps and Gustavo Flores-Macias use an experimental survey to show that public opposition to a war increases when it will be paid for through taxation rather than debt. And drawing on her book on the subject in a recent Vox piece, Kreps explained why there is so little attention paid to the wars America is currently fighting — let alone new ones it may fight:

What explains the American tolerance for such open-ended, seemingly never-ending wars?

One view is that the light footprint of modern warfare — drones, small numbers of special forces, and cyber, as opposed to large deployments of troops — is a chief culprit. This approach to conflict removes a barrier to war because it does not inflict casualties on American troops that would draw attention to and drain support for the enterprise.

This is surely a contributing factor. But I argue that the most crucial difference between these wars and those of the past is how they have been financed. Contemporary wars are all put on the nation’s credit card, and that eliminates a critical accountability link between the populace and the conduct of war.

Caverley also demonstrates that taxation matters. He argues that progressive taxation and income inequality distribute the costs of war upward in society and away from the median voter. Similarly, a survey experiment by Cappella Zielinski, Douglas Kriner and Breanna Lechase finds that elite cues that signal support or opposition for different types of taxation instruments will effect partisan attitudes toward a conflict.

Imposing these costs might not make members of Congress more likely to formally declare war. However, if congressional declarations of war are supposed to be a constraint on the executive branch’s ability to initiate a conflict, they might increase the salience of war and peace in ways that affect the political calculus more than hectoring legislators about their duties under the Constitution.

Matthew Fay is director of defense and foreign policy studies at the Niskanen Center. He has a B.A. degree in political science from Saint Xavier University and has two master’s degrees, one in international relations from American Military University and one in diplomatic history from Temple University. He has previously published research on nuclear weapons, intelligence leadership, defense politics and grand strategy.