Orrin Hatch, Bob Corker and others are enraged by Donald Trump's destructive trade war. Will they do anything? 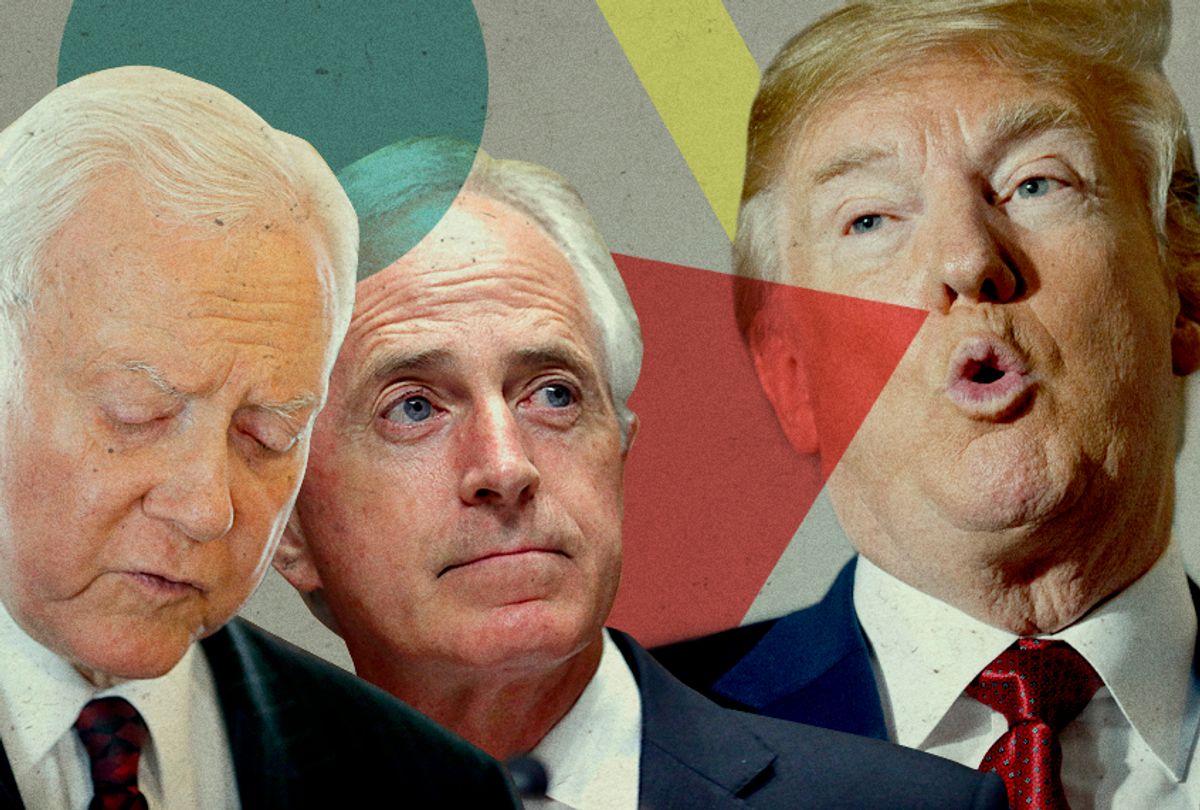 When it comes to the Republican Party, Donald Trump can do no wrong. Sure, he's ignorant and undisciplined and has taken a wrecking ball to our democracy at home and our alliances abroad. His administration is the most openly corrupt in history, and he is personally under investigation for possible conspiracy with a foreign power. But nobody's perfect! His followers love him, the economy is working well for rich people again, they're going to get their solid Supreme Court majority and he signed their massive tax cut bill. Who are they to rock the boat over rampant corruption and betrayal of national security?

As I have written many times, going all the way back to the presidential campaign, the Trump phenomenon exposed something important about the conservative movement which has spent decades building up an edifice of ideology that went beyond simply "Fool the rubes into voting to give rich people their money." (Others have made this point in depth.) It is now obvious that they were wasting their breath with all that folderol about "small government" and "freedom" and "individualism." Trump showed that underneath it all, the dogwhistles were the conservative movement.

No, conservatives simply don't care that Russia attacked the U.S. in the last election, because it benefited them. They certainly don't care about the toxic swamp of corruption that threatens to drown the entire government. But for all of their sycophantic enabling, there is one area that has the GOP contemplating a small revolt because it will actually hurt their voters directly in the pocketbook and affect their donors' bottom lines. Those are things for which they do have some respect. I'm talking about the trade war.

I should say at the outset that there are some good arguments for targeted tariffs and a reevaluation of trade deals and global financial institutions. Progressives have complained for decades about the international trade structure in which the benefits all float up to oligarchs and multinationals while workers are squeezed from all sides. There is a legitimate debate to be had here. But Donald Trump is not the man to lead it.

It's often been observed that Trump formed his trade philosophy, if you want to call it that, in the '80s. He used to rant about the Japanese in exactly the same terms as he once ranted about the Chinese and is now ranting about Mexico, Canada and the European Union. Catherine Rampell of The Washington Post archly pointed out that Trump's views are entirely defensible -- at least, by the standards of the 1680s, when mercantilism reigned. She explains:

What is mercantilism, exactly? As you may remember from some long-ago high school class, it’s an economic philosophy that was prevalent in the 17th and 18th centuries. In a nutshell, mercantilists believed a country should try to maximize exports and minimize imports. The logic was this: Military power comes from wealth; wealth comes from accumulating gold and silver; and the way you accumulate gold and silver is through trade surpluses. Your merchant ships should go out loaded with attractive goods and came back overflowing with shiny specie.

There basically was no such thing as modern-day trade diplomacy; tariffs were high, and no one would have trusted anyone to stick to trade agreements anyway, since everyone was trying to maintain trade surpluses at once. Which is fundamentally impossible. It was a zero-sum view of the world. Nothing was win-win, everything was win-lose, and everyone was suspicious of everyone else.

As you also may remember from high school history, then a dude named Adam Smith waltzed onto the scene. He (and subsequently other classical economists, such as David Ricardo) turned much of this thinking on its head. Smith showed that real national wealth doesn’t come from amassing piles of gold, which are transitory. Wealth comes from increasing productivity — that is, by figuring out how to make stuff more efficiently, which permanently increases living standards.

How do you increase productivity? By specializing in what you do well and honing your skills in that area. Then you trade with other people who do other stuff well. Through these transactions, over time, everyone gets richer. In other words: Trade is not zero-sum; it’s positive-sum.

Trump wouldn't know mercantilism from militarism, and his instincts in this matter are simplistic because he sees everything in life as a zero-sum game: He wins, you lose.

He tweeted this back in March:

Even a grade-school kid can see the holes in that argument. He seems under the illusion that other countries can't fight back or can't survive if they do. That's just not true. They can and they will.

That fact is making even the supine GOP Congress get restive as Trump's willy-nilly tariffs on China, Canada and the EU are starting to bite their own constituents and as those partners retaliate.

According to Politico, Sen. Orrin Hatch, R-Utah, who previously suggested that Trump would be one of the greatest presidents who ever lived, has now turned angrily against the tariffs, saying he'd "like to kill 'em." Sen. Pat Roberts of Kansas, another Republican who is getting an earful from his voters, says “Individual senators have met with the president, including me. The [Agriculture] Committee met with him, the Finance Committee met with him. And there’s nobody for this.”

Trump simply doesn't understand what he's doing, and until Congress steps in and does its job, he will continue to do whatever he wants. He is unrestrained by reality because he's in so far over his head that he can't see it.

There is some movement by Sens. Bob Corker, R-Tenn., and Pat Toomey, R-Pa., to put a stop to Trump's use of "national security" as a rationale for imposing tariffs. He ludicrously used that excuse to hit Canada. But that seems months away, if ever. Meanwhile, Trump's's talking about tearing up more trade agreements and withdrawing from the World Trade Organization. He apparently believes he can personally negotiate take-it-or-leave-it bilateral trade deals with every country in the world, based on some boilerplate that demands that all other nations allow the U.S. to make money at their own expense. Republicans know this is daft but seem to be convinced that they cannot defy him even on behalf of their own voters.

At this point you have to wonder if Republicans don't simply hope that Democrats win a congressional majority in November and do their dirty work for them. If it weren't that much of the world's prosperity rested on this issue, it would be understandable if the Democrats told them it was their mess and they had to clean it up. Unfortunately, like so many aspects of the Trump presidency, this Republican mess is toxic for all of us.