Lawsuit alleges boy separated at border left unbathed for 85 days: "He was full of dirt and lice" 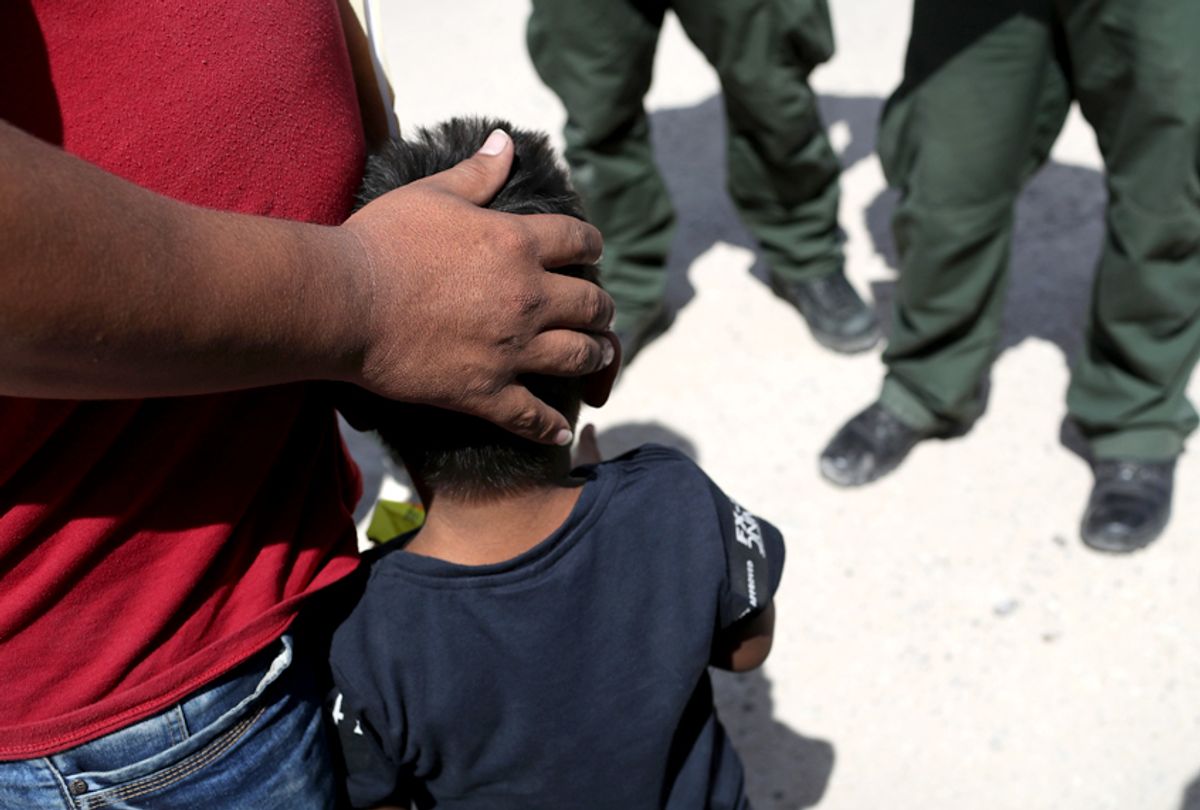 U.S. Border Patrol agents take a father and son from Honduras into custody near the U.S.-Mexico border near Mission, Texas. (Getty/John Moore)
--

Warning: The stories quoted below, reported by PBS NewsHour, are disturbing.

A new report reveals the extent to which the children and parents separated by law enforcement at America's southern border have endured terrible trauma due to that policy.

They come from a motion filed by 18 Democratic attorneys general (from 17 states and the District of Columbia) to accelerate the timeline in which families separated by President Donald Trump can receive information and access to their parents or children.

From Olivia Caceres, who had her 1-year-old son taken away from her at a legal port of entry: "He continued to cry when we got home and would hold on to my leg and would not let me go. When I took off his clothes——. It seemed like they had not bathed him the 85 days he was away from us."

From a man who presented himself at a port of entry for asylum and was immediately separated from his 5-year-old son and 1.5-year-old daughter: "[The children] did not have shoes or blankets in the detention center, and there were people in the cells that had to sleep standing up. They did not have enough to eat either, and could not drink the water, because of the chlorine they added to it … the incarcerated children were insulted – called named such as 'animals' and 'donkeys.'"

From Alma Poletti, an investigator for Washington's attorney general, regarding the conditions she observed when visiting a detention center in Seattle: "The place was freezing …The girls placed their mats in the floor very close to one another, since there was not enough space to fit them more comfortably. Girls as young as 3 years old were detained in this place and without their mothers."

From Angelica Rebeca Gonzalez-Garcia, who was separated from her 7-year-old daughter and has not seen her, although she has learned that her daughter got sick and bruised and was hit by a boy in the detention facility: "…One of the officers asked me, 'In Guatemala do they celebrate Mother’s Day?' When I answered yes he said, 'then Happy Mother’s Day' because the next Sunday was Mother’s Day. I lowered my head so that my daughter would not see the tears forming in my eyes. That particular act of cruelty astonished me then as it does now. I could not understand why they hated me so much, or wanted to hurt me so much."

From Rep. C.A. Dutch Ruppersberger, D-Md., who interviewed inmates at a detention center: "Both men visibly struggled to maintain their composure while recounting the trauma that they experienced since coming to the United States and ultimately broke down into tears. Our interpreter too broke down into tears, finding their stories too painful to bear."

These stories, and in particular the one about the young boy covered in lice and dirt, have led to an outcry against Secretary of Homeland Security Kirstjen Nielsen, with Rep. Ted Lieu, D-Calif., openly calling for her resignation on Twitter.

Nielsen has also made the news in another unflattering way, due to a report by The Intercept that detainees were moved away from her when she visited one of their centers in order to make sure that she wasn't annoyed by their questions or cries for help.

Homeland Security Secretary Kirstjen Nielsen made a series of secretive visits to South Texas immigrant detention centers on Friday. One of the facilities the secretary visited, in Los Fresnos, houses parents whose children were taken from them under President Donald Trump’s “zero tolerance” family separation policy. Many of the detainees there are women, and many desperately wanted to speak with Nielsen. Instead, they were moved to a distant soccer field, where they shouted to Nielsen for help but were too far away for her to hear them.

Reporters could not talk to Nielsen either, even though, as confirmed to The Intercept by a DHS press secretary on Monday, she toured two Immigration and Customs Enforcement detention centers for adults in South Texas and a shelter in Brownsville that houses young children separated from their parents. Additionally, ICE confirmed to The Intercept on Tuesday that more than 60 women were moved during the secretary’s visit, though the agency claimed the move was for the purpose of “recreation.”

Another recent controversy involving the family separation policy: DNA tests are being used as a means of determining whether migrant children who were separated from their parents are in fact biologically related to them, according to CNN. While the government claims this is being done to make sure that the children are actually related to the people claiming to be their parents, as opposed to being human trafficking victims, the pro-immigrant and pro-refugee group RAICES has expressed concern that this will simply be used to further infringe on their civil liberties.

"This is a further demonstration of administration's incompetence and admission of guilt. This further drives home the point we've been saying: They never registered parents and children properly," RAICES communications director Jennifer K. Falcon told CNN.

While all of this is happening, there is still considerable evidence that the Trump administration is not focused on reuniting the migrant children with their parents. As Chris Cillizza of CNN pointed out in a recent editorial:

What's remarkable about the lack of action — or even a plan of action — is that time is running out. Here are a few of the upcoming deadlines as set by a federal judge in California last week:
July 26 is three weeks from today. While it's possible that the Trump administration is, behind the scenes and without releasing any information on what they are doing, rapidly reuniting families, it's much more likely that isn't happening -- or at least at nothing close to the rate that would allow the government to reunite all kids and parents by the end of the month. On Thursday afternoon, HHS said it plans to meet the deadlines set by the California judge, although that might mean sending separated kids into detention facilities with their parents.

How the far-right has double standards on immigration issues.