Scarlett Johansson can't do this: "Pose" shows why authenticity matters in LGBT stories

In an industry that continues to overlook transgender actors even for transgender roles, "Pose" embraces and wins 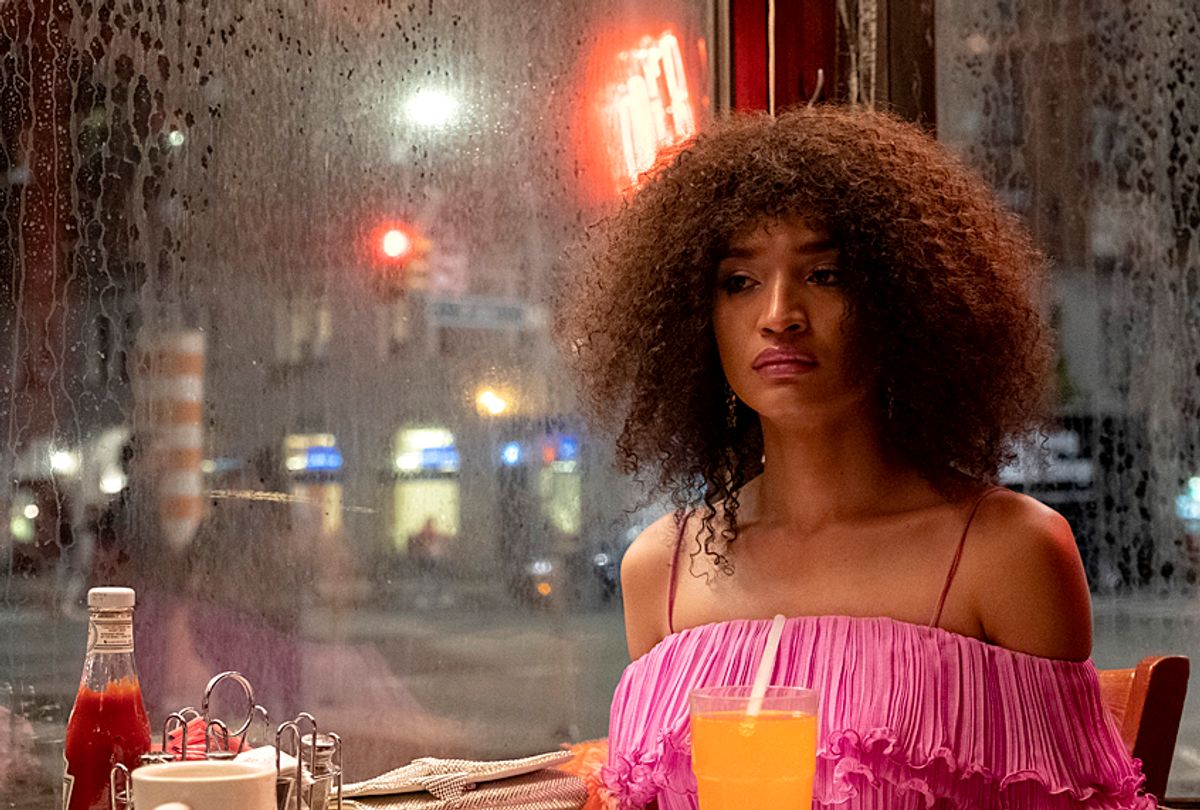 We’re living in a time of necessary television, of dramas and comedies that expertly speak to who are are, where we are and where we’ve been. To find a show of our times in our time is nothing extraordinary. It matters, surely. But it’s not everything.

Except in cases like FX’s “Pose,” a series that exists equal portion as a deference to executive producer Ryan Murphy’s power as a Hollywood creative, and because there is nothing like it in popular culture. Not on “RuPaul’s Drag Race” or its accompanying products, not in any pop diva’s efforts to co-opt Madonna’s hit-making appropriation of gay ballroom culture as America sashayed in to 1990. “Pose,” airing Sundays at 9 p.m.,  is a series that simply has to exist, on its own merits, because in the way of any story about a marginalized culture, it is the canary in a coal mine.

Witness: Earlier this week Scarlett Johansson, a cisgender woman,  caught social media grief — again — for signing on to an upcoming theatrical release titled “Rub & Tug.” The biopic tells the story of transgender man Dante “Tex” Gill, assigned female at birth and initially named Jean Marie Gill, who ran a successful prostitution business in Pittsburgh through the 1970s and '80s. Her statement in response to the backlash, pointing to the other cisgender actors who have played high profile, and highly criticized, transgender roles in the past, didn't do much to help the case for her casting: "Tell them that they can be directed to Jeffrey Tambor, Jared Leto, and Felicity Huffman’s reps for comment."

You may recall that this is not the first time ScarJo took a swan-dive into hot water over identity appropriation issues, having taken the lead in the film version of the Japanese manga tale “Ghost in the Shell.” That graphic novel and anime property is about a cybernetic human, but it's still a story set in an Asian metropolis. Arguing that the lead, Major Motoko Kusanagi, might plausibly look like a white actress because she's a fictional character is weak, to put it kindly. However, “Rub & Tug” is a story about a transgender person who actually existed.

READ MORE: Scarlett Johansson and the perils of white feminism

This is also Hollywood, where the highest profile TV project about a transgender character, “Transparent,” starred a cisgender man, Jeffrey Tambor (as Johansson pointed out), playing lead character Maura Pfefferman up until very recently. The response to criticisms of Johansson's casting in this new project as well as in "Ghost" is the same: for a film to be a financial success, it requires the lure of an established star. Left unaddressed is the fact that neither Asian actors nor transgender performers receive the same opportunity as white cisgender actors when it comes to winning star-making roles.

Transgender actors who have made it into the mainstream — Trace Lysette, among them, who appears in Sunday’s episode of “Pose” — have made their displeasure at Johansson’s casting known. ". . .Not only do you play us and steal our narrative and our opportunity but you pat yourselves on the back with trophies and accolades for mimicking what we have lived... so twisted,” she said in a recent tweet. “I’m so done.”

Oh word?? So you can continue to play us but we can’t play y’all? Hollywood is so fucked... I wouldn’t be as upset if I was getting in the same rooms as Jennifer Lawrence and Scarlett for cis roles, but we know that’s not the case. A mess. https://t.co/s8gBlBI1Sw

For our sake, we hope "I'm so done" is hyperbole, because we need Lysette and actors like her to remain visible and to keep gaining footholds with parts in prominent projects.

Witness: not long ago a transgender woman was kicked out of a restaurant for refusing to show her identification to an attendant when she went to use a bathroom. She was within her rights, as she proved to the manager, who was waiting for her outside the bathroom. What the manager didn’t know is that the woman, Charlotte Clymer, works for the Human Rights Campaign and has a large following on social media, which is why her tale of indignity received media coverage. How many other transgender men and women are subjected to this and worse without us having heard about it?

This is a long way to backing into the argument that “Pose” isn’t merely necessary television, it’s also a show that conveys its message in a way that ministers to our emotions as if they are gentle possessions, which they are. "Pose" also happens a very specifically in-your-face addition to the realm of television shows whose purpose goes beyond mere entertainment.

Many television series have been credited for forwarding the cause of LGTBQ rights over the years, among them “Will & Grace” which has successfully been revived, and “The Ellen DeGeneres Show,” whose host is invited into millions upon millions of American homes precisely because she is ebullient and kind and dances for their delight. DeGeneres’ contribution to America’s embrace of civil rights for LGBTQ Americans cannot be underappreciated.

“Pose,” however, takes this struggle a step further by asking the audience to embrace and accept the stories of transgender, gay and lesbian characters who exist circa 1987, when identifying as such required a willingness to put one’s life on the line to live authentically. Ryan and co-creators Brad Falchuk and Steven Canals intentionally constructed the largest cast of transgender actors in series regular roles to bring these stories to the screen, supported by a guest cast and a crew that employs more than 100 transgender or queer performers, writers and directors, notably Janet Mock, who co-wrote and directed the episode airing on Sunday, and “Transparent” writer Our Lady J.

Much of the drama surrounds members of competing “houses,” or families of choice formed by LGBTQ youth whose natural families reject them. But the rivalries between houses, exposed in full on the ballroom floor, are merely the story's spice. The meat and meaning is everything happening in their lives offstage, where characters are turned away by potential employers, or face the toll of AIDS head on while the rest of the world looks away.

A recent episode depicts Blanca (Mj Rodriguez), founder of the newly minted House of Evangelista, contending with the death of her biological mother. Confronted with the choice of facing the family that disowned her or mourning from a distance, Blanca claims her right to pay her respects to the woman who gave her life regardless of the potential danger.

She also returns to the mother who took her in when her blood relatives kicked her out, Elektra Abundance (Dominique Jackson). The episode is about family, and what it means to mother children that don't neatly fit into society. But it's also about pain. Blanca pays her respect to Elektra as she's recovering from her transitional surgery in the hospital, a choice that costs her the companionship of the cisgender man she loves. And one of Blanca's siblings physically assaults her during the family repast.

Certain B-plots in "Pose" carry less weight than the constant struggle, the scrape and sacrifice required just to get by. As the show has moved further into its first season, the illicit romance between Indya Moore’s Angel and Evan Peters’ Stan Bowes, a white married man who falls for her despite what would appear to be a stable union with his wife Patty (Kate Mara), has become secondary to the sustaining connection to pride in identity realized by Blanca and Pray Tell (Billy Porter), the grandfather and emcee of the New York ballroom scene. Even as Pray dispenses rough love to Bianca and her children, they fortify one another.

But “Pose” sets its target on greater sights than merely entertaining with sparkling visions of queer artists on a quest to capture "realness," always pursuing some approximation of the genuine article, some sacrificing their bodies to achieve it. What each episode does naturally, and beautifully, is take us into the stories of marginalized people with plots pegged to their lives and identities, making these stories central as opposed to auxiliary.

It’s not giving anything away to say this week’s episode, like many before it, brings viewers nose to nose with the despair of the AIDS crisis in a way that makes the past present. As much as people would like to believe that HIV is under control, it’s not. Few Americans care that it’s still ravaging Third World countries. But it’s also hitting crisis levels in Florida.

That said, “Pose” doesn’t lash itself to one distinct message or issue, choosing instead (and wisely) to connect us to how the people living with these issues cope with them or fall short. FX describes "Pose" as a dance musical ostensibly to get around having to explain its purposeful emphasis on the late-'80s ballroom scene, and the why and how of it. Specifically, it digs into the why and how of these competitions, what they take to pull off and what they represent to the queer men and women in that scene, most of whom are black or Latino.  Even more importantly, it explains why these events that may seem frivolous to an outsider actually provide a lifeline for a subculture mainstream America has rejected.

Until the last few weeks, and honestly until November 2016, we might have fooled ourselves into saying that this show is a period piece, a vision of a past America. Recent headlines, not only with regard to ScarJo or Clymer or even the presumed swing rightward of the Supreme Court, tell a different story.

Conveying an understanding of this requires a number of tactics and tools; “Pose” is one of them, and one that honeys that message with song and fashion. Sunday’s episode is a tragedy that marks the ending of one life for one character, forcing him to contend with the truth of being pushed into his next chapter by the merciless ravages of a disease. A number of characters live with HIV in this series, but being mindful of the fact that the clock is ticking inspires them to think bigger, to be bolder in a drab world and dance with that much more determination.

“We are living in a world where all of us could truly be gone one day, where our kind is just a memory, one the rest of the world would be happy to forget. All we have left is right now,” says Pray Tell. He’s talking about the New York of three decades ago. But the vitality of his message holds true in July of 2018. If we must make time for so-called "necessary" television that reminds us of why the struggle still matters, if only to preserve the variety of potential and sparkle all around us, of the gorgeousness of every color and shade, “Pose” may be one of the few shows on television right now that fits.

"The category is. . .live! Work! Pose!" Pray Tell sings out in the drama's opening credits. We're to understand that he's calling this out to the women and men in his ballroom, but it's actually a call to awakening, directed at all of us.

The star of FX's "The Americans" talks about why she likes "mean" roles.