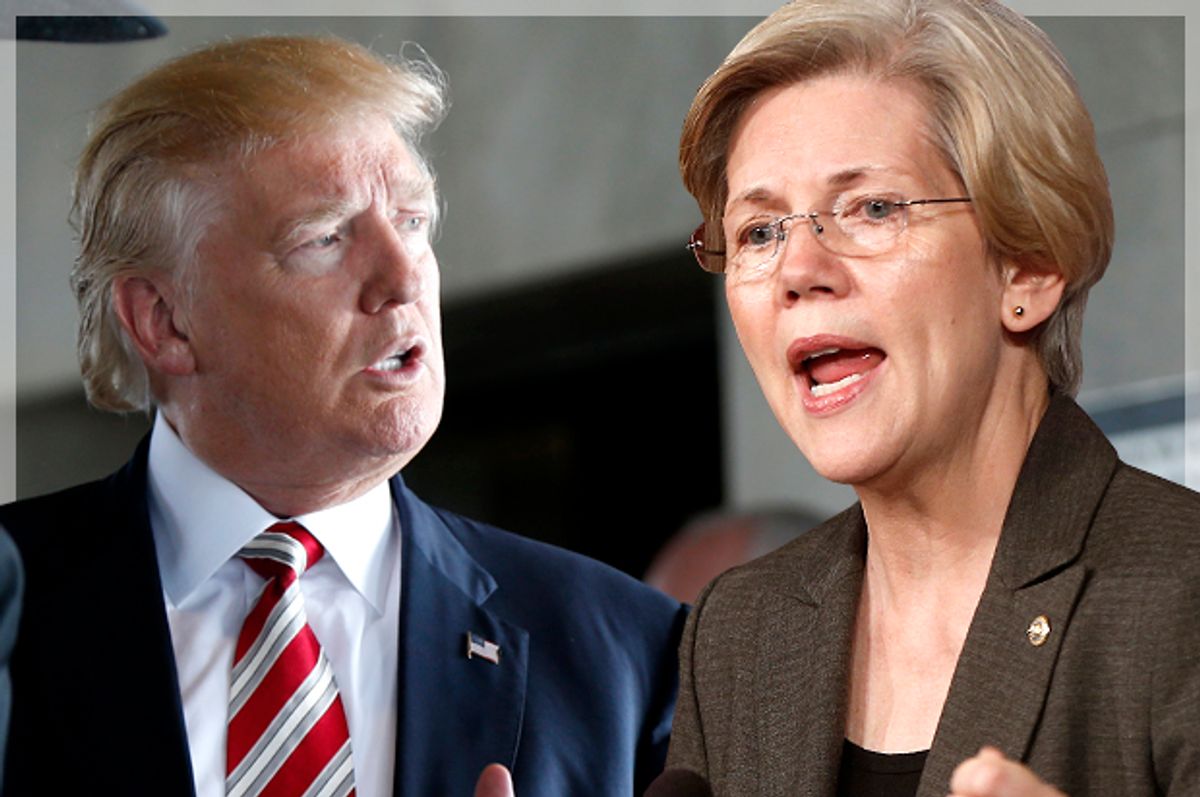 President Donald Trump was publicly shamed by Sen. Elizabeth Warren, D-Mass., for focusing on making racist insults and challenges toward her instead of trying to repair the damage his policies have caused thousands of innocent migrant children.

What prompted Warren to remark on Trump's seeming obsession with her genes? An attack by the president on Thursday, hitting the Democratic senator for her past claims of having Native American ancestry.

"I will give you a million dollars to your favorite charity, paid for by Trump, if you take the test and it shows you're an Indian. I have a feeling she will say no," Trump declared at a political rally in Great Falls, Montana, according to NBC News.

Trump's next line revealed the underlying reason why he and his supporters resent Warren for claiming to be part-Native American: "She's based her life on being a minority!"

The president also used his diatribe to take a swipe at the modern women's rights movement, name-dropping #MeToo in a way that implied the movement is about oversensitivity and ignoring that it is rooted in a backlash against sexual assault.

"I'm gonna get one of those little kits. And in the middle of the debate, when she proclaims that she's from Indian heritage, because her mother says she has high cheekbones..That's her only evidence, that her mother said she had high cheekbones," Trump started by saying.

He then added, "We will take that little kit and say — but we have to do it gently, because we're in the #MeToo generation, so we have to be very gentle. And we will very gently take that kit, and we will slowly toss it, hoping it doesn't hit her and injure her arm, even though it only weighs probably two ounces."

Trump also took shots at other prospective Democratic presidential nominees in 2020, including former Vice President Joe Biden and Sen. Bernie Sanders, I-Vt. As former White House chief strategist Steve Bannon told NBC News, this is part of the president's larger game plan to start attacking the Democratic candidates who are likely to run against him in 2020.

"No president in history will ever have campaigned for a midterm like this one. The benefit for that is Kamala Harris, Booker, Gillibrand (and others) need 2019 to get their game ready for the national stage — they will now have to face Trump in open combat with all the chips in the middle," Bannon told NBC News. The references there were to Sen. Kamala Harris of California, Sen. Cory Booker of New Jersey and Sen. Kirsten Gillibrand of New York.

Yet Trump's attacks on Warren's claim to having Native American ancestry — which frequently includes the use of the moniker "Pocahontas" as a slur against her — is different from other types of political mudslinging. Because he hasn't apologized for it or stopped using it, it is clearly in the subtext of all his attacks against her claim to Native American heritage, even when it isn't directly used.

As such, it is appropriate to refer to this editorial by Molly Roberts of The Washington Post from November on why it's so offensive:

Trump’s repeated reference to “Pocahontas” is racist first of all because it’s intended as a pejorative. Trump does not like Warren. It’s also racist because it seizes on a stereotypical Native American name to refer to an entire race — like calling an Asian man “Jackie Chan” or a black man “Frederick Douglass” (one of the president’s favorites). Worse yet, Trump is mushing together his tribes: At an event to honor Navajo heroes, he used the name of a Powhatan woman to disparage a senator who claimed Cherokee ancestry.

But there’s no fact-checking necessary to know that two things can be bad at the same time. If Warren lied or even exaggerated, that’s wrong. Trump insulted the indigenous population by throwing around “Pocahontas” as a derogatory term for an imagined generic American Indian. That’s wrong, too.

On a previous occasion in March when Trump challenged Warren to take a DNA test, the Massachusetts senator responded by appearing on Fox News and reiterating her version of the story. The appearance ended with her stating that the claim of Native American heritage is "part of who I am and no one's ever going to take that away."

You know, my mom and dad were born and raised out in Oklahoma, and my daddy was in his teens when he fell in love with my mother. She was a beautiful girl who played the piano. And he was head over heels in love with her and wanted to marry her. And his family was bitterly opposed to that because she was part Native American.

It's a part of who I am and no one's ever going to take that away.

When The Washington Post applied its Fact Checkers to the question of Warren's ancestry, it concluded that "there is no documented proof of Warren’s self-proclaimed, partial Native American heritage, which experts have noted is difficult to prove to begin with." That said, it did find that Warren making her assertion off of nothing more than family lore raises "serious questions about Warren’s judgment," although it also found there was no evidence that "we found no proof that she ever marked a form to tell the schools about her heritage, nor any public evidence that the universities knew about her lineage before hiring her."