Women's anger is not to be ignored: Lessons from HBO's "Sharp Objects"

Not often does a series that never relents on its darkness also manage to be captivating, seductive and damning 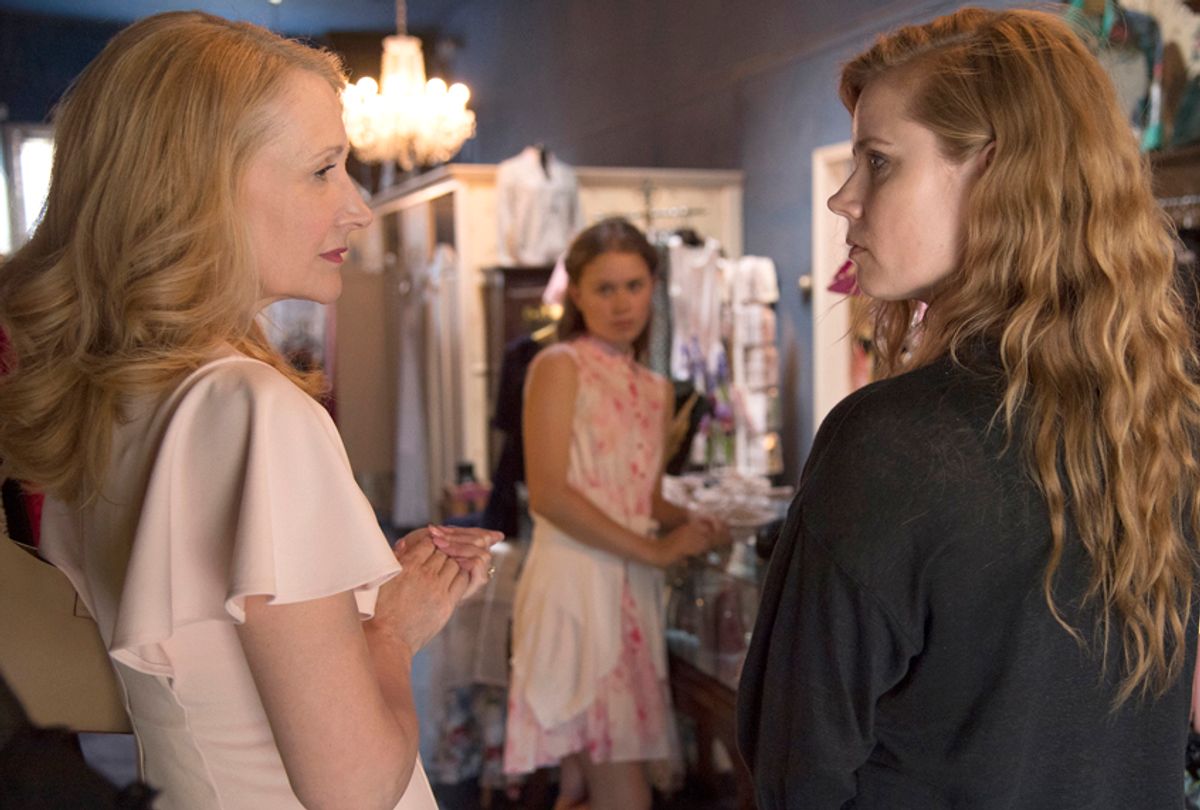 Some nightmares, the worst ones, move so slowly that you don’t wake up from them right away. The terror feels normal, even though you may know something’s not right. It’s a usual sort of bad feeling, typical enough to fool the mind into believing that you may be awake. That is, until the monster shows up. Only then does the brain recognize it is inside something that isn’t real.

“Sharp Objects,” HBO’s latest limited series from “Dietland” creator Marti Noxon and Jean-Marc Vallée, and based on a novel by Gillian Flynn (“Gone Girl”), reproduces that sensation throughout the seven of its eight episodes that were provided for review.

Understanding that from the outset lets the viewer know what she’s in for. Once you’ve gotten in the car with Amy Adams’ Camille Preaker, a reporter as haunted by death and despair as the hometown to which she returns, the story takes its time. But Adams is transfixing enough to maintain a hold on us, and coupling her performance with Vallée’s seductively languid directing style makes the journey into the darkest reaches of Wind Gap, Missouri worthwhile. Lurking in those shadowy corners is a specter that drives whole segments of the television, film and literary industries: dead little girls.

"Sharp Objects" premieres Sunday at 9 p.m., and in a real way it feels like a story that's been a long time coming. Unlike Vallée's other major HBO miniseries "Big Little Lies,” this is not a pleasure to watch. Not much about the female personalities in "Sharp Objects" is worth emulating. Even the bitchery in Wind Gap is a weapon women use to cudgel one another into submission and assimilation, not an accessory to power.

But aesthetically, at least, "Sharp Objects" could be that drama’s sibling, some lost sister that has sustained the grief of the world and responds with wisdom and anger.

READ MORE: Rise of the sane and angry woman

Flynn's debut novel was published 12 years ago, and the mystery at its center could have been explored in any time and feel just as affecting. But if the vein of resentment and inwardly directed rage feels relevant to 2018, it's because Flynn, Noxon and the series' other writers are simply acknowledging that it has always been there. That said, "Sharp Objects" does not serve as a piece that speaks to the modern female insurgency in politics and culture as much as it states that a woman's anger is evergreen, and not something to be ignored, chastised into complacence or medicated into invisibility. That the agency she gains as she matures into womanhood has value on its own. In the end, this is a story about control.

Camille, a journalist for the St. Louis Chronicle, returns to the hometown she ran from to pursue a story about two missing girls, one her editor Curry (Miguel Sandoval) hopes may inspire prize-worthy coverage. And her presence agitates the place as much as the crime she’s looking into. Camille is an unwelcome bridge to a land the people of Wind Gap would rather not occupy, as much of an outsider as the Kansas City detective Richard Willis (Chris Messina) who comes in to investigate when girls start turning up dead. She's an independent, unmarried woman in a "traditional" small Southern town.

Fear and mistrust locks patriarchal dominance in place in Wind Gap, but “Sharp Objects” also establishes how it is policed and enforced by women, including Camille’s chilly mother Adora Crellin (Patricia Clarkson), the town's society matron. Adora is one of many reasons tension hangs over everything in Camille’s small town like an August humidity, but “Sharp Objects” refuses to spice the narrative’s tragedy with wit or motes of humor.

Instead, Adams makes Camille a creature molded by the anguish of the place. Her portrayal leads with a mask of battered determination, giving Camille a spirit that might as well be constructed from boiled hide. Adams wears this throughout the series, a substantial amount of poundage to cart since she appears in nearly every scene.

Commanding the center of this drama with such unrelenting quiet presses Adams into psychological corners one may be unaccustomed to seeing her occupy in her films. “My demons are not remotely tackled, they’re just mildly concussed,” Camille remarks to someone, a line Adams deliver with zero levity.

But hers is a broken-in energy that draws us into Camille’s vodka-drowned sadness, sloughing it off in layers at first, then cutting into the tale’s multiple mysteries — the histories paralyzing her family as well as the ones holding her town hostage, materially and psychologically.

Clarkson, meanwhile, is the embodiment of the perpetually bereaved and bitter Southern Gothic wife, one too anchored to the past and her resentments to move forward or to allow anyone else to move forward. The actress’s controlled timbre holds an array of emotions from moment to moment, cradling Adams’ tangible heartache in a prickly bitterness, transforming the scenes the actresses share into sparring matches, most conducted surreptitiously though out in the open, some of the more abusive in plain sight.

Sweetening this bitterness somewhat is Sandoval’s performance, meeting Adams’ shattered glass with a soothing wash of empathy. If there’s a heart to this story, it’s in their shared phone conversations, where we also glimpse another side of life stalked in its own way by sorrow.

Flynn's writing examines the many facets of women and womanhood at close range, especially elements of the female psyche shaped by forces external and internal. Very quickly, the script establishes Wind Gap as a small place where a woman’s worth directly correlates to her femininity and her ability to recognize where she belongs in the family and social structure, and how loyal and obedient she is. (Tellingly, the town’s unofficial saint, of sorts, is a wife of a Confederate Army soldier who miscarried while enduring assaults and rape by Union soldiers, perversely memorialized annually in carnival festivities surrounding “Calhoun Day”.)

An obedient woman, one who doesn’t make waves or go beyond her prescribed boundaries, is safe. Pretty much the only acceptable rebellion Wind Gap women can engage in is gossip — and, if you happen to be town’s most elegant lush, Jackie (Elizabeth Perkins), lots of drinking. Camille bucks nearly all of these norms, save for the functional alcoholism.

Memory arrests evolution in “Sharp Objects,” a notion that informs Vallée’s visual storytelling strategy and evokes Flynn’s predilection for seducing and tricking the people trusting in the story she’s telling. Anyone who has read “Gone Girl”or seen the movie based on it knows to be wary of any single character's perspective, although “Sharp Objects” wears a good deal of its sleight of hand on its sleeve.

Vallée capitalizes on the prettiness of this conceit by shuffling history and present together throughout each episode, increasingly bleeding and blurring the borders between the two as the plot moves along. He also captures the sultriness of Wind Gap in unconventional ways, evoking the conflicting sensations of grace and dread in every color-saturated daytime scene and cutting it into its evenings.

Aiding this deception is some incredible casting, including the remarkable resemblance between Adams and Sophia Lillis, the actress playing a younger version of Camille. Splendid as the established cast is, the younger actors are equally engrossing, particularly Eliza Scanlen's dangerously ill-behaved and duplicitous Amma, Camille’s 15-year-old half-sister.

It’s appropriate that the adolescent and twenty-something actors are granted as much opportunity to imprint their presence onto this story as the women at its center, since “Sharp Objects” concurrently exists as an examination of our culture’s obsession with girls, whether alive or dead little ones.

Curry wants Camille’s story to sell newspapers as much as he’s hoping she’ll somehow conquer the devils inside her as opposed to knocking them out with booze. Camille comes to comprehend all the ways that Wind Gap, and our culture by proxy, intentionally sacrifices girls to populate its ghost stories, to lock its living women in a spirit of compliance, observant of etiquette and history and “tradition.” The tale also interrogates the means by which nightmares of lost innocence snag us collectively in their nets, locking women into the virgin-slut binary that is at the core of our debates over abortion rights and the control women have over their own bodies. Dead little girls never come of age to have a say in such decisions that would make the men in their lives uncomfortable; the father of one victim voices the relief that his girl was murdered but not raped as well.

And Adams, with the support of executive producers Flynn, Noxon and Vallée and an extraordinary team of co-stars, makes “Sharp Objects” use Camille to weave a palpably dark parable about history’s impact, and how failing to confront its lasting damage traps us. Grim as this assessment may be, this also makes the drama one of the better offerings on TV right now — not a feel-good summertime story by any means, but one deserving of attention and worth seeing through to the finish.