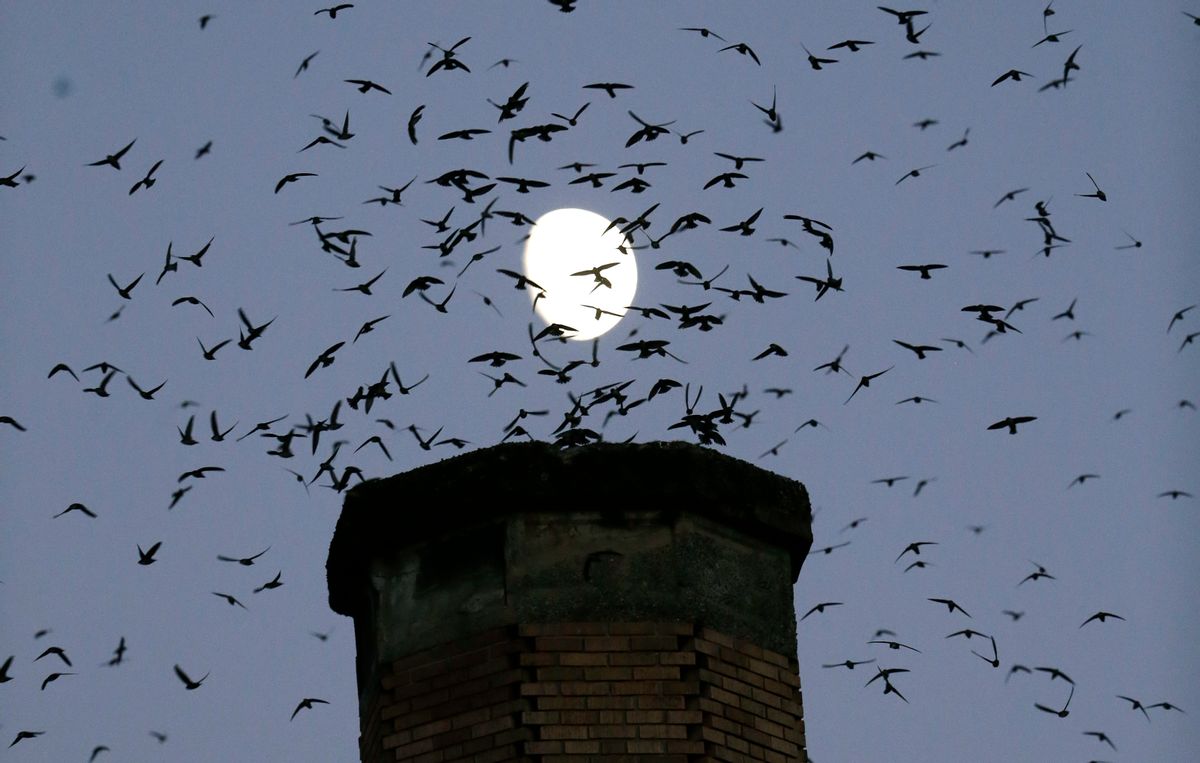 With their early morning chirping and poetic associations with dawn, most people think of birds migrating during the day, but most bird species actually make their journey at night.

Some, like raptors, will migrate during the day because they can take advantage of thermal currents to move faster. But small birds like warblers, sparrows, and flycatchers migrate after sunset when it’s cooler, winds are calmer, and predators (looking at you, raptors) are fewer.

That’s one reason light pollution, like brightness from streetlights, and even cars and homes, can dramatically impact migration. Scientists know that artificial light can deter sea turtles from nesting on beaches, and affect tropical forest regrowth by disrupting bat behavior. But for the first time last fall, a study quantified the effect of artificial light on in-flight bird behavior.

The research used the National September 11 Memorial & Museum’s “Tribute in Light” in NYC. Every September 11 since 2002, twin beams of light — 88 spotlights total — matching the shape and orientation of the Twin Towers stretch four miles into the sky and can be seen 60 miles away. Observations at the lights started in 2008, but in 2010, the lights attracted so many birds that the researchers convinced the memorial’s operators to extinguish the lights for 20 minute intervals. These intermittent periods of light and subsequent darkness created an opportunity to better understand how birds’ behavior changes with artificial light.

Researchers found that birds clustered around these lights in densities 20 times greater than normal. They also flew in circles and vocalized more vigorously than in surrounding areas. When the lights were turned off, the birds dispersed, and resumed normal flight behavior. At least 1.1 million birds were negatively affected over the seven days the tribute was illuminated during the seven-year study period.

Artificial light, in addition to causing fatal collisions with buildings or other lighted structures, can attract birds into more urbanized areas (like New York City), where there’s less suitable habitat for finding food, putting them at higher risk of death or starvation. In disturbing their flight behavior, birds waste valuable energy without making any forward progress on their migration. The researchers, though not making specific recommendations for the September 11 memorial, suggest that generally reducing artificial light when large volumes of birds are migrating would help minimize the number of bird collisions.

To do so, of course, people would need to know when exactly birds were on the move. For decades scientists have been curious about when birds migrate and what drives them to move at certain times. Generally, birds migrate during two main periods: spring and fall. They tend to move from areas of lower resources to higher resources — food and nest sites are top priority. During the spring, from March to May, birds migrate north from their tropical overwintering sites in Central and South America, to North America, where they breed during the summer.

Fall migration, which occurs from August to late October, sends adult birds and their juvenile offspring, reared during the summer breeding season, on the reverse route, flying from North America to overwintering sites in warmer climates. Birds have shown amazing capabilities for migration, with some species migrating up to 44,000 miles round-trip in one year. To put that in context, matching the distance traveled per ounce, an adult human would have to travel approximately 25 million miles in a year. This absurdly large distance emphasizes the incredible feat birds undertake annually, and explains the importance of traveling efficiently.

Our understanding of migration timing at the population scale for different species has improved greatly thanks to citizen science: people can contribute bird observations (such as date, location, species, number of birds) through eBird, the Cornell Lab of Ornithology database. eBird data give year-round information on the location of bird species across the globe, contributing to our understanding of bird movement and often having conservation applications. Some studies use small biologgers — tiny sensors actually attached to a bird that collect information, such as light level to estimate their location. Using these tools, scientists are able to track individual birds during a migration and see how a bird moves from an overwintering site, like the Bahamas, to a breeding site, like Northern Michigan.

Benjamin Van Doren, lead author for the artificial light study above and a PhD student at the University of Oxford, recently found a way to not just track, but actually predict bird migration. The new study (in preprint) combines weather radar observations of bird migration with atmospheric conditions to create a forecasting system for bird migration. Only recently have computational advances made it possible to conduct this kind of research at this large of a scale. Computer models analyzed NEXRAD radar images gathered from 143 sites across the US.

They measured the density of flying birds during a standardized time window each night between March and May over a 23-year period. The radar couldn’t detect individual birds or identify species, but it could detect whether it was a light migration (quantified as 60-70 birds per cubic km) or a heavy migration (1700 birds per cubic km). Van Doren and his co-author Kyle Horton, a postdoctoral researcher at the Cornell Lab of Ornithology, estimated that on average, 200 million birds move across the entire US, jumping to 520 million birds during peak migration. 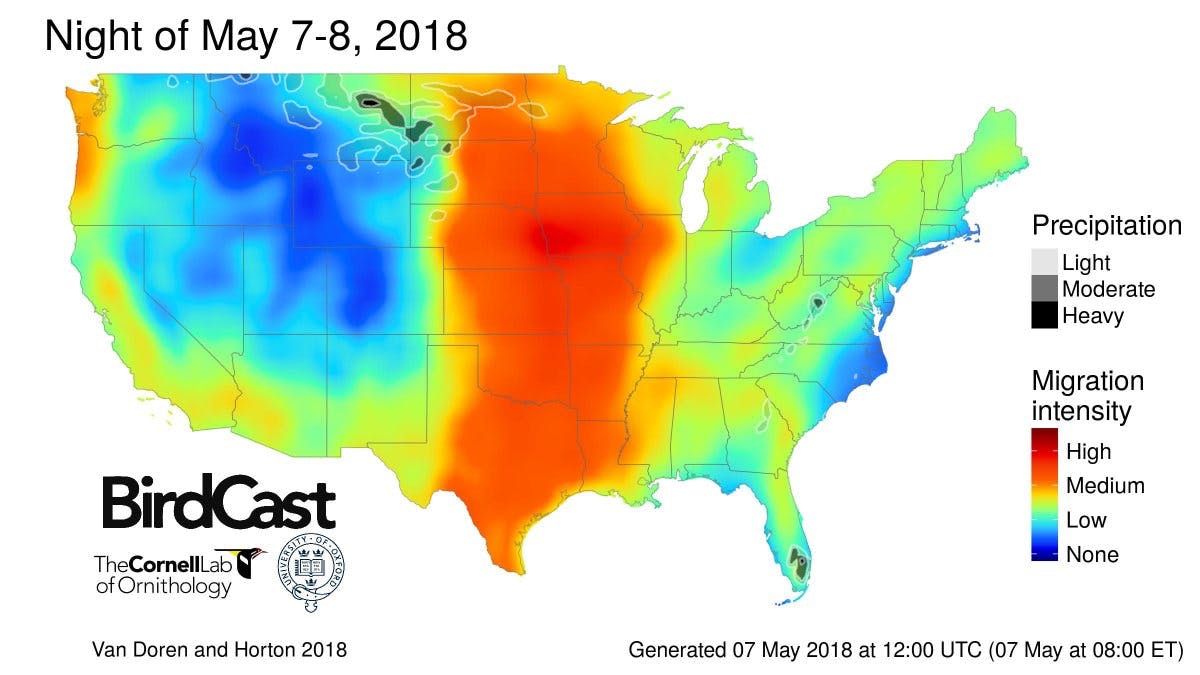 Next, they combined these radar data with weather conditions like temperature, wind, and air pressure, to identify what conditions birds tended to migrate in. They found that air temperature was the best predictor of how many birds would be in the air. Even given similar wind conditions, more birds migrated when temperatures were warmer. They took the research a huge step further by using these models to predict bird migration from current weather, rather than just relating it to past weather events. Now, like checking the weather forecast online, you can check the bird migration forecast on the Cornell Lab of Ornithology website, BirdCast. Van Doren started working with BirdCast in 2012, when it depended on subjective human input to assess bird migration, but he writes that this “automated migration forecasting is a whole new frontier.”

BirdCast now has two main components: forecasting maps, which predict migration intensity up to three days in advance, and live migration maps, which show current migration intensity. The system was released this spring, allowing it to be tested during this year’s spring migration. The live migration mapsshow the bird migration rate in an animated loop that is fascinating to watch for hours on end. Deactivated for the summer while most birds are breeding and not migrating, BirdCast forecasting maps will return in time for the 2018 fall migration. Arguably, fall might be an even more critical period to forecast bird migration: a larger volume of birds migrate during the fall because parents and their offspring head south. The young will be migrating for the first time, and therefore are inexperienced and even more susceptible to things like artificial light disorientation.

One of the goals of the project was to help reduce bird collisions, especially for endangered songbirds, like the Kirtland’s warbler — which means helping the public understand what birds are up against. Van Doren wrote that “one of our major goals is to make migration accessible to the masses.” BirdCast has already been popular with birdwatchers deciding whether it is worth waking up early in the morning to go birding, and hopefully it will engage more people to report bird observations through the ongoing eBird citizen science database. These forecasting tools show a lot of promise in increasing our understanding of bird migration. For example, eBird observations can be combined with the radar data, like in a recent study that showed heavier birds fly faster during migration.

But the real hope is to make an impact on bird conservation. Scientists hope the ability to predict peak migration can be used to save bird lives. Reducing artificial light in key areas can help prevent bird mortality, particularly important for endangered migrating songbird species. For instance, collaborations between the Cornell Lab of Ornithology scientists and energy producers and homeowners could reduce the number of deaths from bird collisions. Or, while it would be unrealistic to ask a wind facility to turn off turbines for a whole migration season, being able to predict peak migration – exactly when high volumes of birds are moving — for a given area would allow a facility to turn off turbines for specific hours of certain nights. With the ability to predict bird movements and some cooperation, we have new hope for our feathered friends in the future.