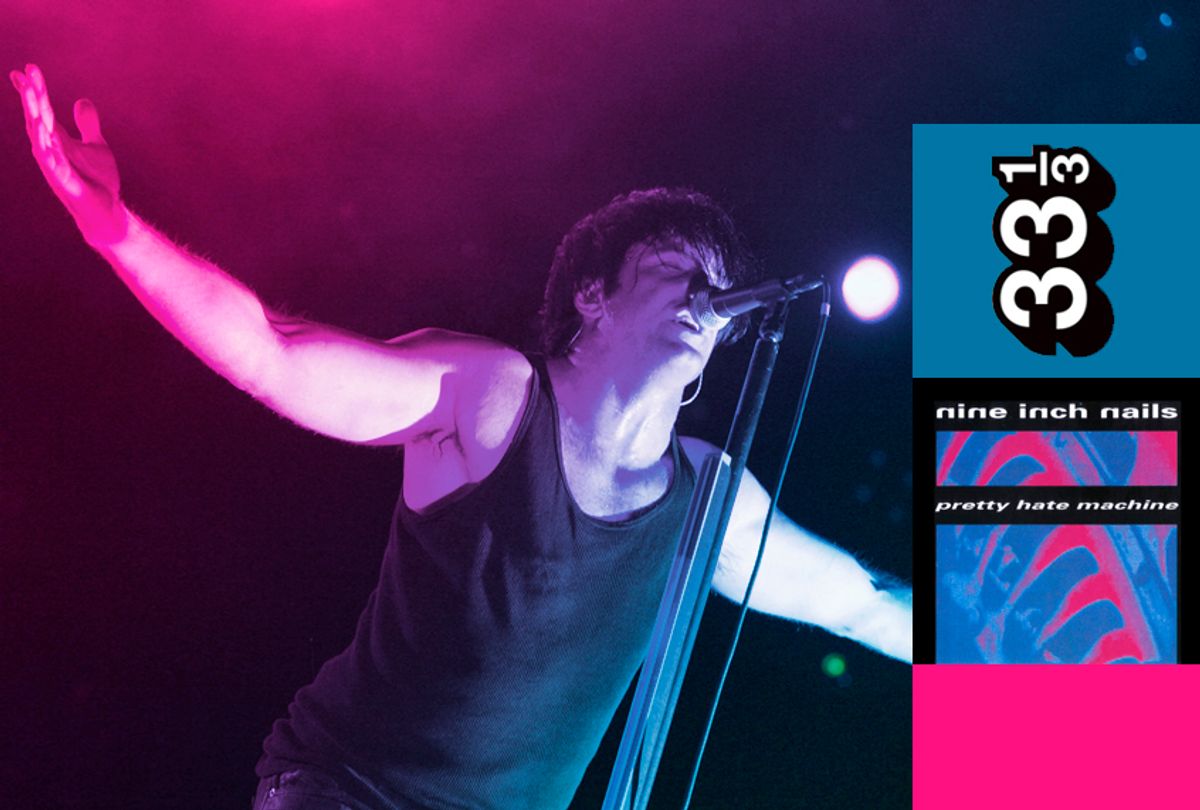 In 1979 Bruce Springsteen wrote a song called “The River,” a story of a teen pregnancy prompting a loveless marriage in which the father works a crummy job whose future is uncertain “on account of the economy.” If you take "Pretty Hate Machine" as the sound of that child’s growing up, then the album is not a harbinger of the technofuture but the continued articulation of dread felt by a certain kind of man given certain chances.

"Pretty Hate Machine" arrived in the final year in office for Ronald Reagan, a fiercely antilabor president whose tax incentives made it easy to close American factories and whose trickle-down economics curbed 1970s inflation while crushing the country’s working people. Reagan’s mantra of personal responsibility focused the blame for lost jobs on workers, and his government cut social programs that could help the newly unemployed, including health care, food stamps, and education. This was the playbook of economic neoliberalism, which would come to be a global strategy to redistribute wealth back to elites.

Reagan’s policies drove the U.S. into the postindustrial era at an enormous human cost. Industrial music was one poetic response to this trauma, much like country music was earlier in the history of industrialization. Country rose as a genre at the moment when most Americans had left rural areas for cities, as a kind of modern music about rural, social, and temporal distance. It was a way to understand the lost connection to the land, along with the humiliations heaped onto working-class, mostly white folks trying to make a decent living. Country musicians have defined themselves against the urban, cosmopolitan, and technologically modern world through recordings that emphasize acoustic timbres and rough vocal qualities. Lyrics idealize the rural, celebrate the pride of manual labor and integrity of a promise, and lament the singer’s or others’ actions when they fail to live up to an ideal or “sell out” for the modern.

Industrial is a postmodern music about the failures of modernity, a genre begun as an avant-garde practice in 1970s England but which grew into a network of underground scenes in fading western industrial cities by the eighties. The dry irony of Throbbing Gristle’s maxim “Industrial music for industrial people” has been interpreted across the globe with different instruments and musical styles, and with varied lyrical approaches. One thing is constant: industrial musicians embrace the technologies of management, the sounds of the shop floor, and flexible, nonlinear production techniques in their critique of power. Their cut-ups, sputtering drum machines, and shreds of harsh noise are the ugly mirrors of pop music’s technological wonderland, while their lyrics literalize the horror of humans being treated as dead machines in pop-Marxist language and production styles that robotize the voice. Like the sci-fi tradition it samples so heavily, industrial posits a central theme: dystopia is already around us, if only we were awake enough to see it. The music becomes a way for its listeners to stay sharp, to hear and feel not sorrow for the betrayals that have led to their lost way of life but to see causes, feel rage, and be moved to resistance.

Nine Inch Nails borrow the sound and style of electro-industrial but reject the overt politics and parody of the subgenre to focus almost exclusively on the personal tragedy of the people and institutions that fail one individual: Trent Reznor. NIN’s lyrics explore the repressions of religion, family, and society, but only as they pertain to one life, sung in almost too-human melodies and without perceivable irony. With Nine Inch Nails, the effects of mechanization are laid bare: the human experience of powerlessness in postmodern, postindustrial life is crystallized by someone screaming in and against an impossible room full of synthesized sensations.

A generation of young men and women had sympathy for such a sound. Dead-end job, no health care, apocalyptic faith, broken family. They wanted to switch off entirely, but there was one nagging problem: they were still human.

Crooning melodies and sweet pop hooks were Reznor’s major sonic crimes against 1980s industrial music. Another was this focus on the personal, the absence of real politics. That Reznor subsumed industrial’s clangs, grinds, and warps into pop and sold millions of records only made the case against NIN worse. It is possible to hear Nine Inch Nails as the watering down and commodification of industrial’s anticapitalist musical subculture, but for the majority of people slumbering through Reagan’s American morning, Nine Inch Nails was a stunning revelation: dissent from the complacence of suburbia was possible, and it could sound so strange.

Other mainstream alternative bands of the 1990s inspired similar awakenings, but none so bluntly addressed the undersides of religion, power, sexuality, corporeality, and trust as did Nine Inch Nails. Take, for instance, the band’s most famous song, “Closer.” It’s a six-minute pop hit built from the kick of Iggy Pop’s “Nightclubbing,” with an inhuman metronome, a queer synth hook, and distant distortion that builds into the lyrical confession that only the least human of intimacies is tolerable for he who feels vile, broken, fallen—that only through carnality can he experience something like salvation. After all the hard drums, synths, and lyrics, the song ends with a naive keyboard hook.

Tenderness and brutality: Reznor has veered between the two throughout Nine Inch Nails’ career. This can be seen best in his approach to the keyboard—in his legato fingertips and in his fist. As a child, Reznor distinguished himself on the piano, and was encouraged by his teacher Rita Beglin to study music for a profession. He showed a fondness for works with long legato lines, such as those of Frédéric Chopin and Erik Satie. Practicing this style of French salon music, he would learn to press a key with constant energy, to linger with patience and release only after the next finger connected. The last key of a phrase in this style is a slow release into nothingness. These scores demand incredibly tender phrasing, as the player’s fingers mimic the breath of an anguished singer. But from the first moment of NIN, Reznor has been beating the hell out of his keyboards. As the stage shows grew larger, more keyboards and guitars joined the heaps that roadies glue together after gigs. His mission was to focus the energy of this European parlor instrument turned tone trigger into an aggressively masculine form of expression. Making synths tough was part of Reznor’s artistic achievement: he dramatizes the expressive qualities of the machine for the purpose of sounding human. The trick of Nine Inch Nails is to make synth-pop sound like hard rock through gesture, distortion, and banks of noise.

But in the "Hate Machine" era, the music was still pretty synth and pretty pop.