I made you birthday tacos, 873 miles away

"I made these tacos for you. I tested them and wrote up the recipe and everything" 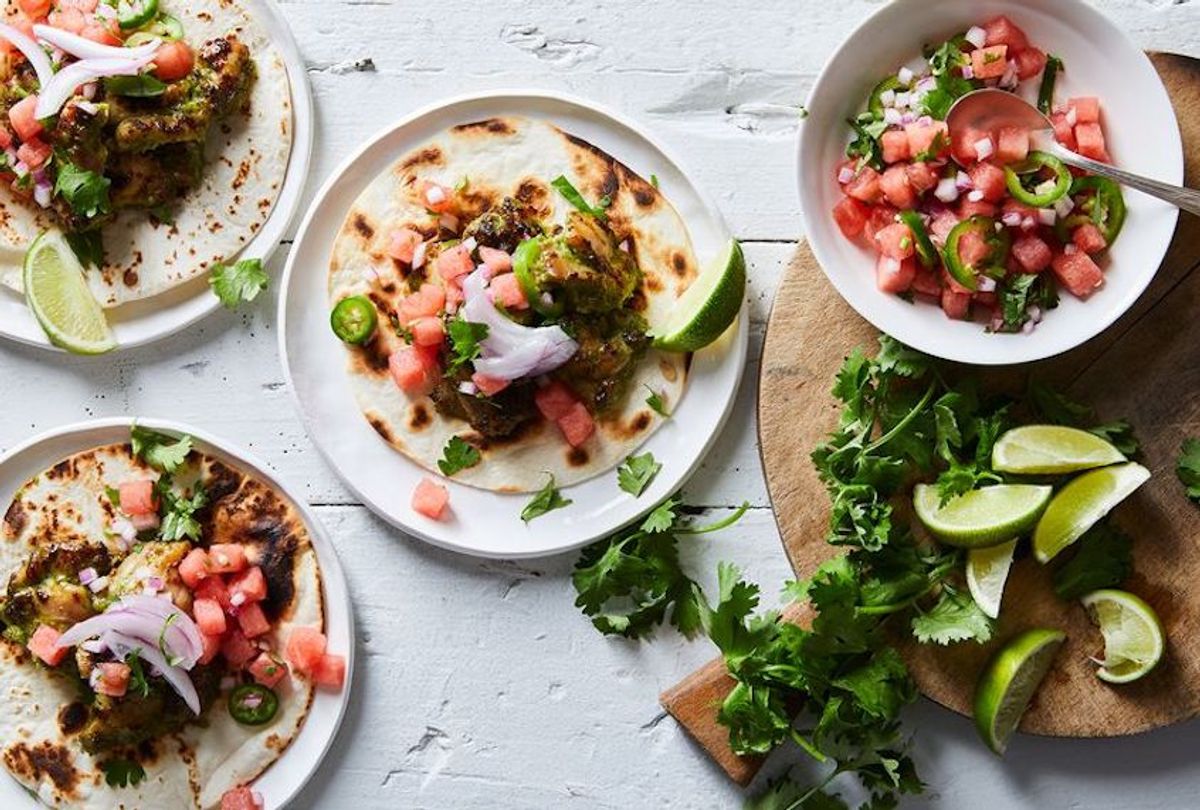 I can’t for the life of me remember what we ate on our first date at that restaurant in Atlanta. I just remember walking in late, seeing you by the hostess stand, looking for me. You were wearing a striped sweater and carrying your motorcycle helmet in one hand. I tapped you on the shoulder.

When we sat down, the first thing you said to me was, “So you’re writing a cookbook?” And I said I was. And you said, “Me too, but mine's just this big book that I bound and transfer recipes into like some medieval illuminated manuscript. Sometimes you get carried away with wanting a tome of power, you know?” And I looked at you funny.

But after dinner, I’d ride to your apartment on the back of your motorcycle, and over a couple Dark ‘n’ Stormies you'd show me this gorgeously illustrated Book of Shadows that I thought was just a joke because you were weird. I don’t know if you remember, but our first kiss was on those stools in front of your kitchen’s passthrough, where we were drinking and flipping through your tome of power.

So many other things would happen on those stools over the years. Christmas gift exchanges, New Year’s Eve toasts, early mornings with strong coffee in the summer when we were both off. That’s where I’d come sit and you’d step into the kitchen and say, “Want a drink?” Or, “You hungry?” And I'd watch you through the passthrough. Later, it would become hard not to get up and come up behind you to hold you. You'd turn around and kiss me, then shoo me back to my stool.

One time, when we were both piss drunk, you made me midnight breakfast tacos. I sat on that stool and watched you fry up the bacon, crack a couple eggs in the bacon fat, and chop up an old tomato that was sitting at the bottom of your fridge. There was shredded cheese and an unlabeled jar of salsa (which, I would later learn, you bring home every Christmas from your favorite Mexican restaurant in Kansas, where you’re from).

What I didn't know at the time was that years later, you and I would still be in touch even though it was futile (long distance). We’d send each other letters and care packages and visit each other on holidays, me to Atlanta and you to New York, where I live now.

Every summer we’d get to spend our birthdays together, July 22 and July 23 — just you and me, Cancer and Leo cusps. This is what Astrology.com has to say about our compatibility: “Both Signs like to take charge, but they come at a leadership role from very different directions. No small number of disputes can rise from this difference.” Among this “small number of disputes” was one in particular about tacos.

We were in California, tasting wine, driving down the highway in our big sun hats, blasting "Bennie and the Jets," and deciding what to eat for dinner when you suggested tacos. And I finally told you, with great hesitation: "I hate tacos."

“You hate tacos?” you said. Your eyes got so big. I regretted saying it. “What about that Korean taco joint I took you to on your birthday a couple years ago? Didn’t you like those?”

“How can you hate tacos? That’s like saying you hate food, or sandwiches.”

“Come on. No one hates sandwiches.”

You wanted me to explain myself. So I told you that what I don't like about tacos (as opposed to burritos, enchiladas, or even quesadillas, all of which I love to eat) is that only with a taco will you have bare, raw tortilla in certain cross sections of your bite. And nothing enervates me more than raw tortilla. Even when you heat it up, corn or flour (though certainly more with the former), the tortilla somehow gets ice-cold hard 10 seconds later, and that texture's like cardboard to me, like a piece of unadulterated plastic bread. I can forgive a tostada and even order it at restaurants sometimes, but I can't always get down with the taco. “Am I making my case here at all? See what I'm getting at?"

After our conversation, you made it a point to take me to a $1 taco joint you had discovered, to show me how wrong I was about what you called "the world's most perfect food." How hating tacos is like hating air, how they're anything but dry (how could you even think that?), how you have to sop it up with all the different salsas, it's a food group on its own, it's like breathing—see, like this? And watching you with such passion, licking your fingers and teaching me how to taco, redistributing some of the onion and cilantro with your bare hands from one chorizo taco that was hogging it from the pulled pork taco that needed it, then handing it to me, I decided that maybe you had a point, that maybe tacos truly are the perfect food.

Later that night, you'd do this thing that you do a lot. You'd hug me real hard and say, “Why do you have to live so far?” And I'd cry into my hands because I was leaving for New York the next day. I wonder why we always wait till the end to say how sad we are, even though we're feeling it the whole time.

When I got home to New York, I vowed to come up with a taco that both you and I could eat (and like). I blitzed up all my leftover cilantro stems, garlic cloves, jalapeños, salt, sugar, and a generous glug of olive oil, and marinated a couple pounds of cut-up, boneless chicken thighs in this wet, queen liqueur. I roasted the chicken in a hot oven, warmed up a soft flour tortilla in the green chicken fat, topped it off with some leftover watermelon I had magicked into a spicy salsa—all doused in hot sauce—and, as Nigella Lawson says, "applied to face." I stood by my stove that day and ate one taco at a time, made a ritual out of the assembly. That way, too, the tortilla was always warm.

I made these tacos for you. I tested them and wrote up the recipe and everything. They're very good, and if you cook the chicken just right they'll drip down your arm like that time on our birthday in California when you showed me how to eat a taco. I don't know why tacos always remind me of you, but they do.