Is it time for parents to unionize?

Parents need to stop blaming themselves and start blaming capitalism 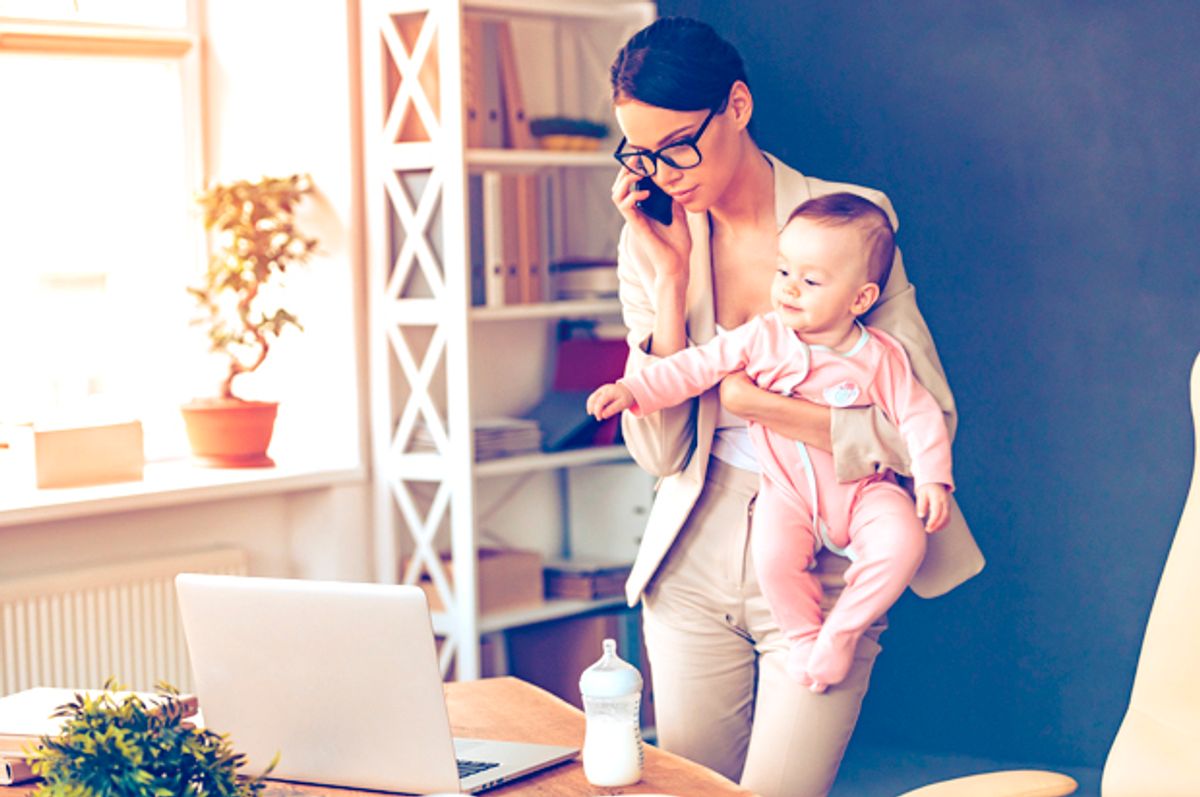 Think of Alissa Quart’s new book, "Squeezed: Why Our Families Can’t Afford America," as “What to Expect When You’re Expecting Under Late Capitalism.” Of the more than 50,000 books listed on Amazon under “Parenting,” few engage as deeply with the economic pressures today’s parents must navigate: precarious work, a shortage of high-quality, affordable daycare and rising costs of living combined with stagnant wages.

Quart, the executive editor of the Economic Hardship Reporting Project, also profiles efforts to improve the lives of parents and care workers — and offers suggestions about what’s still to be done. She spoke with In These Times about the challenges of organizing parents, why we’re so attached to the fantasy of middle-class life and why she considers her book “radical self-help.”

In These Times  I’m interested in the theme of self-blame that runs through "Squeezed." You write that after your daughter was born, and it became clear that you and your husband’s freelance earnings weren’t going to be enough to raise her, you began to blame yourself. Why did you have that reaction?

Alissa Quart: I think we have a tendency to blame ourselves, or we blame others. It’s binary. You can see that tendency in the way some disenfranchised groups now blame immigrants, say, and then on the other side, there’s a lot of rhetoric of self-punishment in American culture that you’re responsible for your own success and if you don’t make it then there’s something wrong with you.

The self-blame and guilt discourse comes from conservatives but it also emanates off of a certain kind of bootstrap self-help, like "Lean In."  “Why aren’t you asking for a raise, why aren’t you earning more money, why aren’t you doing more for your child?” There’s a perfectionism that places a lot of pressure on parents.

ITT: What role do employers and the welfare state, such as it is, play in reinforcing parents’ tendency towards self-blame?

Quart: We don’t have the policies in place that make parenthood easier. You look at parental leave in all these other countries — in Scandinavia, but even in a place like Canada. In Quebec, maternity leave insurance covers 18 weeks of paid leave, plus five weeks for the father, at 70 percent of the parent’s income. Daycare after that is $7 to $20 a day. You don’t have to go to Scandinavia, there are lots of examples. In South Africa, women pay less for a vaginal birth than they do in the United States.

As for employers, there’s still a lot of discrimination against pregnant women. The rate at which pregnancy discrimination cases are filed has increased. There are all kinds of ways in which employers make the experience of pregnancy and motherhood harder, like when women are not permitted to pump in a clean and private place at their place of work. They’re penalizing parents who are trying to do everything right and play by the rules.

ITT: And do you think these parents who try to do everything right and play by the rules are politicized by their experiences?

Quart:  I would like that to be the case, but I feel like people turn it inward. As we’ve talked about, there’s a strong tendency to blame themselves. And there’s a well-behavedness among liberal, middle-class parents. These aren’t people who are necessarily accustomed to seeing themselves as precarious. Also, among mothers in particular, there can be a discomfort around advocating for themselves and making complaints.

They also have a tendency to relativize suffering, to say, “Well, think of all the people who have it worse than me.” But the middle class’s earnings, expenditures, and discomforts make it not what it once was, and make it a much more precarious place to be.

ITT: In the book, you focus on the struggles of middle-class parents. Why did you choose to frame the book that way, rather than focusing on parents who are members of the working poor?

Quart: To be fair, I include some members of the lower middle class or the working class. Some of them are aspiring to be middle class. Some are also in a symbiotic relationship with middle-class parents, like daycare owners or caregivers. I wanted to get at the way in which we are in our class positions like matryoshka dolls. There’s sort of a nesting doll effect. In terms of paid caregivers, for instance, the new anxiety and deprivation of the parents who use their services and their care work is affecting them directly.

In other words, I didn’t want the book to be just another one of those middle-class mums books that don’t look at, say, the care workers who are propping up the middle-class parents.

But yes, I focused on the middle class for the most part and the reason I did so was that it’s the class is always referred to politically as tumbling down or on shaky ground but the counters of that vulnerability, what it looks like up close, isn’t explored granularly. I wanted to do a deep dive into those stories. While the middle class is used as collateral in political campaigns, for instance, politicians aren’t really responding to their needs. After all, there’s so much challenging middle-class life, from the weakening of unions to the rising cost of healthcare and education. There are so many sops thrown to corporate interests — and that’s not just the Republicans, that’s both parties. The people who talk about the middle class aren’t upholding their interests in the legislature.

I love that idea. The people in this book need that sort of thing. And there are plenty of examples of white collar organizing happening right now that I write about in "Squeezed." One thing we’re doing with the Economic Hardship Reporting Project, the nonprofit I direct, is providing financial support to journalists, who were formerly middle-class. We have a Denver Post fund and a Gothamist fund set up to help employees of those companies, which have been destroyed by a hedge fund and a billionaire, Joe Ricketts.

There’s also a lot of organizing around adjuncts, people with PhDs who are precariously employed and may be earning poverty wages that I include in my book. It’s the result of the ways that middle-class people have become what I call the “middle precariat.” What it means to be part of the category of middle class has really changed. There’s been a shift in the imagination of what the middle class is. We think of it as a fixed sign, as a way of containing and satisfying aspiration. But the possibilities of middle-class life are different now. We need to make that mental shift. I think these white collar workers who are organizing, like adjuncts, made that shift because they had to.

ITT: Why do you think people are so attached to this vision of middle-class existence, which is historically very recent and was also always based upon the exclusion of many groups, including people of color and women?

I think it’s a fantasy space, in a weird way. It’s become synonymous with the American dream. People see it as a rung of the ladder at which a person is not overreaching — you’re making it but in a pleasant way.

ITT: What are some of the challenges of organizing parents?

Some of it is time. You have lots of overwork, for instance, what I call the forever clock. It’s happening in lower-middle-class professions, like nurses’ aides and it has extended to middle class people who work in HR or IT or law. They’re working much more than they once did, and characters in the book have like two or three hours a week, not even, to be with their kids.

In other words, how would parents have time to even meet with other parents?

In addition, among women and mothers especially, there’s a lot of shame associated with struggling as a parent. It’s supposed to be something natural, and you’re supposed to be able to do this yourself. But many of the struggles parents have are around money, and having wealth and income is not some failure of natural instinct.

Also, I think the competition for good education pits people against one another. Good schools and good daycare are seen as a scarce resource you have to fight over. Indeed, the moments I found most moving while doing research for the book were the opposite of that — people coming together and sharing resources. In the book, I talk about parents who are co-housing and co-parenting. But I want to say, I don’t recommend these alone as a broad social solution. After all, just taking care of ourselves is quietist. In the end, we need societal change.

ITT: "Squeezed" is a book about parents, and how they’re being threatened by stagnant wages, automation and all these other things. But in that way, it’s actually a book about all of us. What’s the relationship between parents’ struggles and everyone else’s struggles?

I think that’s true. I used to teach at the Columbia journalism school and I would tell my students that every book has to have a sentence that motivates it. I think mine has something to do with what happens when American capitalism hits family life, how it distorts it and how we overcome these distortions.

In the book, I’m really concerned with that and how to make that experience better for parents and kids.

My hook for this book was that it would speak to parents in a different way than most parenting books. It’s offering them a labor-focused account of parenthood. Most of the other parenting books don’t talk about the pressures of capitalism that now accompanies parenthood.

I see my book as self-help to get people to stop blaming themselves and start taking systematic action and to realize that the system is stacked against them in some ways.