The fare at this eatery in gritty East Hollywood, the largest Hispanic community in America, is worth traveling for 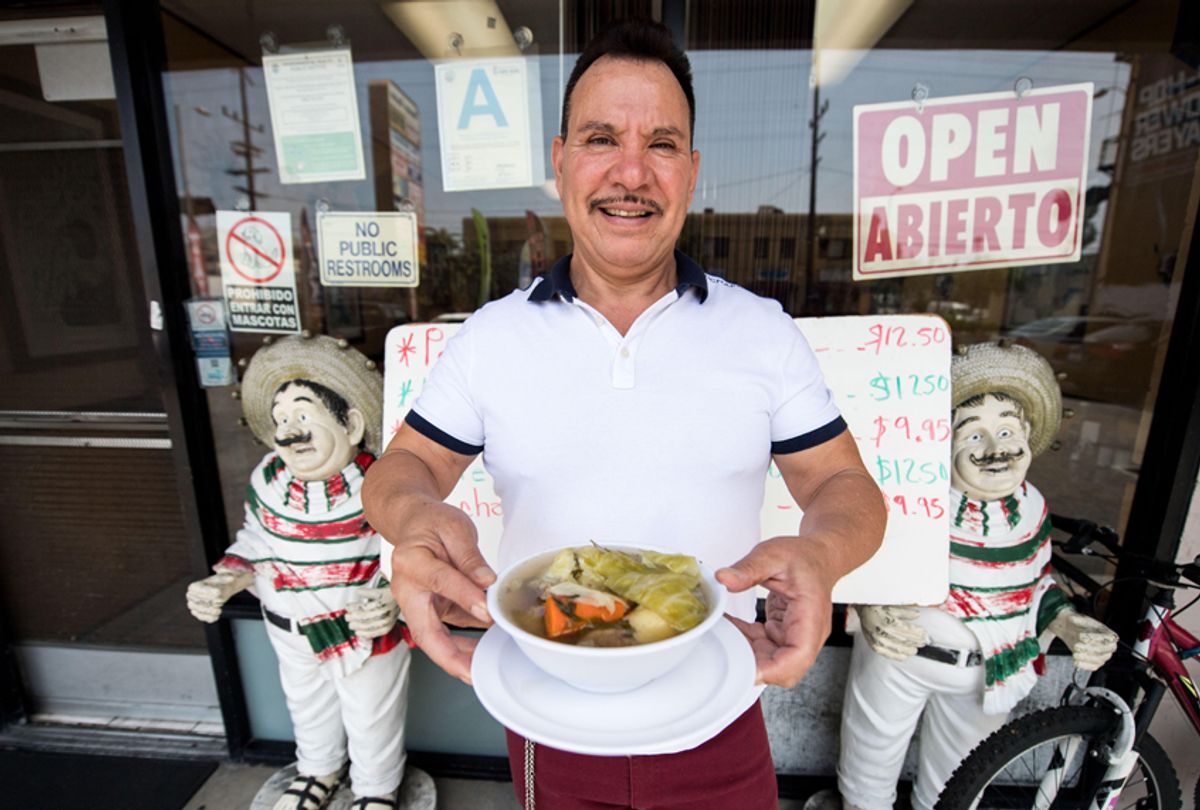 In “The Death and Life of Great American Cities,”Jane Jacobs observes that a vital city is one that contains fantastically dynamic places, neighborhoods which engage and nurture and give thousands of people the freedom to imagine. The most successful parts of a city are those, Jacobs says, that can provide fertile ground for the dreams and plans of its inhabitants. And while at first glance the modest, working class sub-neighborhood that comprises the western reaches of East Hollywood in Los Angeles is not an obvious candidate for a Jacobsenian Valhalla — it is an ugly, gritty, urban space comprised of mini strip malls, few trees, way too many cars and barely any shelter from the intense Southern California desert sun — it is radiant, too, as alive as any place in America today.

Among the most densely populated parts of Los Angeles, East Hollywood contains one of the city’s largest Hispanic communities. It’s not a glamorous part of town, and while safer than many of its posher, gentrified neighbors, East Hollywood is also gang territory, a fact which tends to discourage the casual sightseer.

Residential streets are lined with small houses and low, wide apartment complexes, and the commercial arteries, mini-strip malls north of Santa Monica Boulevard and east of the 101 Freeway, bustle with people of all ages, many of whom are Hispanic, but not all. Little Armenia and Thai Town are in East Hollywood, too, and the Sunset Strip is less than a mile away. You never know who you’ll see in the neighborhood but usually not too many tourists.

I was only there to visit an old friend who opened a laundromat in one of the strip malls. Although I am a recent California transplant, I had heard that East Hollywood was unpleasant and uninteresting, not a destination worth braving traffic for. But for me, it was a case of love at first sight: busy, gritty, noisy, uncomfortably hot, the place felt alive and welcoming and deeply familiar.

Standing there on Santa Monica Boulevard, I was beset with memories of the downtown Manhattan of my childhood. Suketu Mehta, writing about Bombay, suggested that when we encounter a new city we often find other, older cities within ourselves. And for me, East Hollywood evokes, perfectly and painfully, an echo of the feeling of roaming around the commercial thoroughfares of the Greenwich Village of my childhood in the late 1970s and early 80s.

A lot like East Hollywood, 14th Street in 1980 was impossibly exuberant and unattractive. Polluted, crowded, a little dangerous, with random light industry crammed in between storefronts, the whole place full of the smell of bus exhaust and fast food and burnt coffee, it was a space carved out of a great city where a lot of people without a lot of money shared the public part of their lives. And one of the great joys of 14th street for me was being able to feast on all the particular delicacies you kind find for under 99 cents. But I don’t think anyone would seriously question that, since the beginning of human history, one of the hallmarks of a great urban civilization has been the availability of delicious cheap food.

And it was over lunch, around the corner from my friend’s laundromat, that I found the work of civilization being done in East Hollywood. El Comal is a small, light-filled Mexican restaurant in a very ordinary strip mall, next to a botanica and a wireless store. They have an extensive menu, and everything is fresh and good. However if you go at lunch time, and you are lucky, they will not yet have sold out of their ridiculously delicious caldo de res.

The soup arrives in a generously wide bowl, tender beef and perfectly cooked cabbage and chayote and corn on the cob in a delicate broth accompanied by chopped, fresh cilantro, onions and jalapeño, rice, slices of lime and warm fresh tortillas. El Comal plates their caldo de res with as much art as Bouchon Bakery presents a stew.

The vegetables, cooked lightly, are richly colored and distinctly unmushy in the clear broth with the contrasting bright green of chopped cilantro. El Comal’s caldo de res is the kind of magical food ostensibly made to satisfy the kind of hunger you get in the middle of a day of physical labor but that satisfies other kinds of hungers, too, hungers that are nowhere near as easy to define.

It feels generous and thoughtful to be served a bowl of something as perfect as El Comal’s caldo de res, food that is an invitation to celebrate the everyday, but profound, pleasure of a really good lunch. It’s one of the gestures of a vital, dynamic urban civilization; one that makes you welcome and nourished and full of unspoken hope about what might yet await you.

Caldo de res, is, in a general conceptual sense, a bit like Vietnamese pho or New England boiled dinner: poached beef and vegetables are served in a clear bone broth and (depending on regional variation) accompanied by fresh, green herbs and onions, fresh lime, a spicy sauce and/or slices of japaleño as well as cooked rice all – or some – of which to mix in to your liking. Fresh corn tortillas are usually served on the side. If you have never had caldo de res, you are in for a life-enhancing experience whether you eat it at a good restaurant, are served a bowl by a home cook or make it yourself. Funnily enough, caldo is the kind of food that is in vogue right now with a certain kind of healthy eater; the dish is easily tweaked to be a Paleo, ketogenic, or other low-carbohydrate regime dream.

The modern dish is a culinary descendant of puchero, an Andalusian peasant soup Spain introduced across its many territories during the colonial era. Today the soup, modified and improved over hundreds of years, is beloved all over Latin America, the Canary Islands and the Philippines (where it’s known, in Tagalog, as putsero) and endless, mouthwatering regional variations exist.

After my visits to El Comal, I could not resist trying to recreate caldo de res in my kitchen. And as one would imagine, it’s a deceptively simple dish, that while time consuming, is not hard to make but is hard to make well. Even so, it is delicious and more than worth the effort.

Adapted from Abuela’s Kitchen and Saveur

8 cups of water + more to top off throughout cooking

2 chayote, peeled and cut into chunks

3 potatoes, washed, unpeeled, sliced in half or three large chunks

The vegetables are a suggestion – you can and should substitute whatever you like or is in season. Whether to add tomatoes (fresh or canned) is a slightly controversial topic, but use your taste to guide you.

For serving, enough for each diner to mix in: