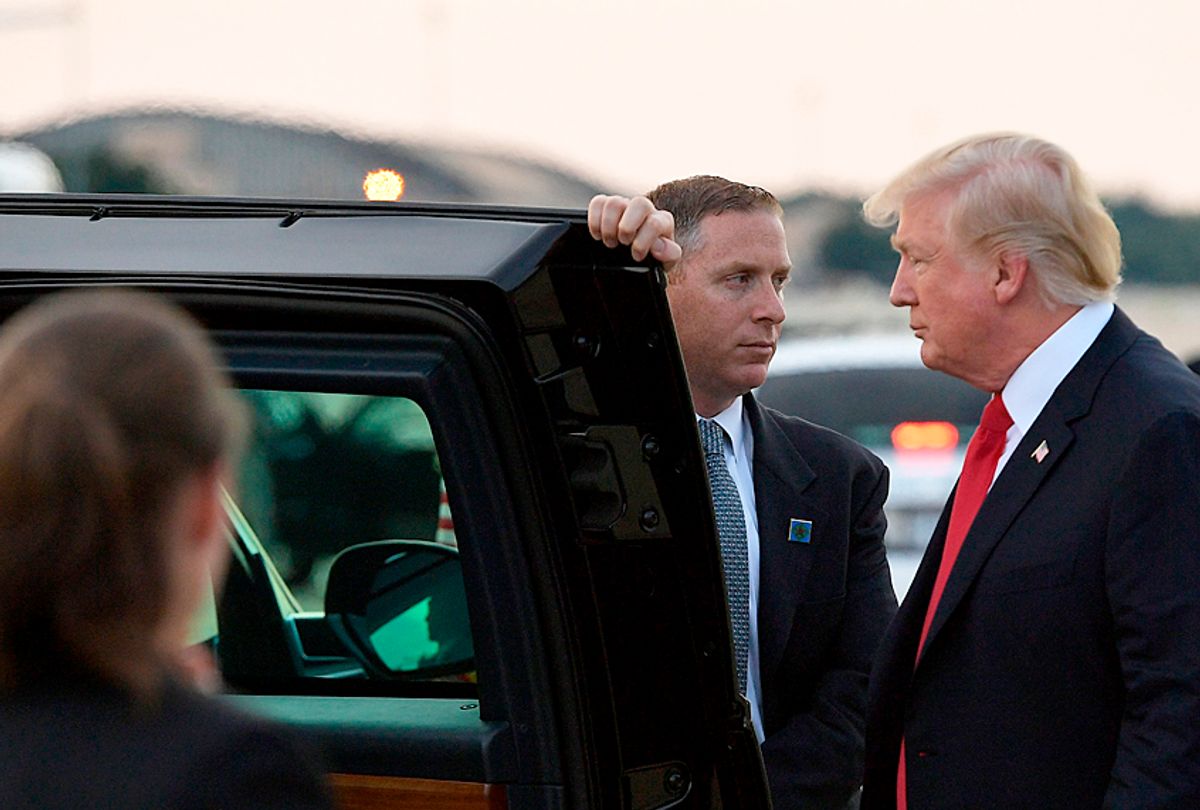 Donald Trump makes his way to board a limousine. (Getty/Mandel Ngan)
--

For over 25 years, Donald Trump was driven around New York City by a man with the last name Clintron. Now, President Donald Trump is being sued by his former chauffeur because — once again — he is accused of being a cheapskate when it comes to his own employees.

Noel Cintron alleges he is owed years of overtime pay and was granted only two pay raises in 15 years, according to Bloomberg. Cintron, who worked as Trump's personal driver for nearly 30 years, filed a complaint which argued that he had been systematically exploited "in an utterly callous display of unwarranted privilege and entitlement and without even a minimal sense of noblesse oblige."

The description of Cintron's time working for Trump appears to be a textbook case of an employer taking advantage of his worker. Cintron claims that he was forced to begin working at 7 AM every day and remain on duty until whatever time that Trump, his family members and/or his business associates no longer needed him. As a result, Cintron claims that he often worked as long as 55 hours each week, but was paid a fixed salary despite this situation. He also claims that Trump only gave him two raises and that one of these, for $75,000 in 2010, was offset by Cintron relinquishing his health insurance, which saved Trump $17,866 in annual premiums.

While this story could be dismissed as merely that of a disgruntled former employee under normal circumstances, it fits into a broader pattern that first began to emerge about Trump during his presidential campaign in 2016. In June of that year, USA Today ran an in-depth report on Trump's history of ripping people off that ultimately was referenced in one of the presidential debates.

At least 60 lawsuits, along with hundreds of liens, judgments, and other government filings reviewed by the USA TODAY NETWORK, document people who have accused Trump and his businesses of failing to pay them for their work. Among them: a dishwasher in Florida. A glass company in New Jersey. A carpet company. A plumber. Painters. Forty-eight waiters. Dozens of bartenders and other hourly workers at his resorts and clubs, coast to coast. Real estate brokers who sold his properties. And, ironically, several law firms that once represented him in these suits and others.

Trump’s companies have also been cited for 24 violations of the Fair Labor Standards Act since 2005 for failing to pay overtime or minimum wage, according to U.S. Department of Labor data. That includes 21 citations against the defunct Trump Plaza in Atlantic City and three against the also out-of-business Trump Mortgage LLC in New York. Both cases were resolved by the companies agreeing to pay back wages.

In addition to the lawsuits, the review found more than 200 mechanic’s liens — filed by contractors and employees against Trump, his companies or his properties claiming they were owed money for their work — since the 1980s. The liens range from a $75,000 claim by a Plainview, N.Y., air conditioning and heating company to a $1 million claim from the president of a New York City real estate banking firm. On just one project, Trump’s Taj Mahal casino in Atlantic City, records released by the New Jersey Casino Control Commission in 1990 show that at least 253 subcontractors weren’t paid in full or on time, including workers who installed walls, chandeliers and plumbing.

This matter was broached by Democratic presidential nominee Hillary Clinton during one of her debates with Trump.

"I’ve met a lot of the people who were stiffed by you and your businesses, Donald," Clinton told him, according to Fortune. "I’ve met dishwashers, painters, architects, glass installers, marble installers, drapery installers, like my dad was, who you refused to pay when they finished the work that you asked them to do. We have an architect in the audience who designed one of your clubhouses at one of your golf courses. It’s a beautiful facility. It immediately was put to use."

Trump initially responded by trying to brush the matter off without flat-out denying it: "Maybe he didn’t do a good job and I was unsatisfied with his work."

Trump later added, however, that his decision to underpay people or rip them off was very much driven by what he felt was in the best interest of his businesses.

"First of all, they did get paid a lot. But I take advantage of the laws of the nation because I’m running a company. My obligation right now is to do well for myself, my family, my employees, for my companies. And that’s what I do," Trump told Clinton.

Individuals who were victimized by Trump's habit of not paying up have been less casual in their description of what it was like.

Paul Friel, whose father Edward J. Friel was contracted to build cabinets for Trump's first Atlantic City casino and was owed $84,000 before being stiffed, told CNN in 2016 that "he was devastated. The fact that we had seen such a huge future in Atlantic City for his business that all of a sudden because of one deal ... his business in Atlantic City was done."

He added, "We had already worked for three (general contractors), and every single one of them lived up to their word until Donald Trump came to Atlantic City."

Beth Rosser, whose father Forest Jenkins was contracted for $200,000 to install toilet partitions at Trump's Taj Mahal casino and who had to fight Trump in court to be partially reimbursed (for ultimately $70,000), told CNN that "it's 27 years later. I grit my teeth every time I see him on television blustering about what a wonderful businessman he is. He stepped on a lot of people."

Even after Trump was elected to the presidency, the accusations of cheapness didn't stop. In 2017 one of Trump's golf resorts in Florida was required to pay more than $32,000 to a supply company that claimed it wasn't compensated for the paint that it used while rendering services, according to Bloomberg.