"Ya’ got me, Sacha. Feel better now?" the former vice presidential candidate asked the "Borat" actor 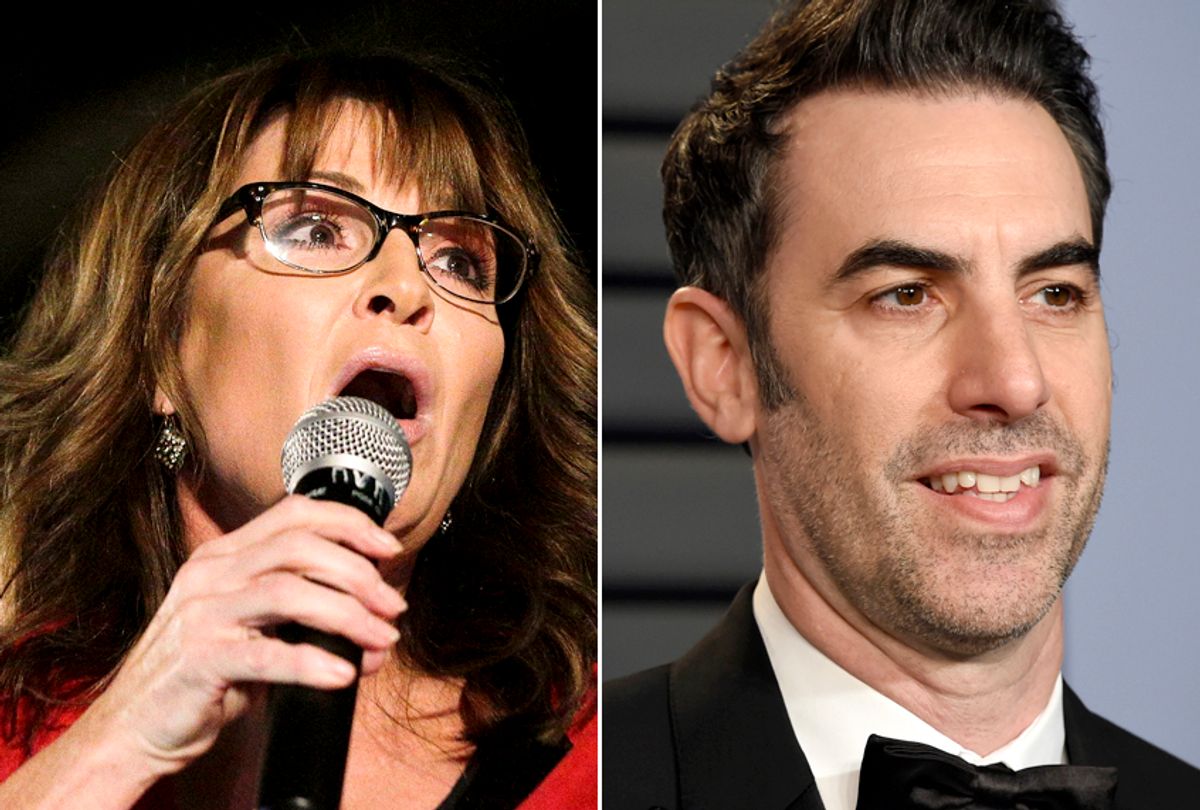 Sarah Palin, the former Alaska governor and vice presidential candidate, is on the warpath against funnyman Sacha Baron Cohen over an upcoming skit that will show the "Borat" actor pranking her while pretending to be a U.S. veteran.

Like many politicians and erstwhile politicians these days, Palin vented her rage on the social media platform for those whose thoughts can't be contained in 280 characters or less — Facebook.

"Yup - we were duped. Ya’ got me, Sacha. Feel better now?" Palin's Tuesday post begins. "I join a long list of American public personalities who have fallen victim to the evil, exploitive, sick 'humor' of the British 'comedian' Sacha Baron Cohen, enabled and sponsored by CBS/Showtime."

After describing how she had been misled into believing that she would be participating in a historical documentary about American veterans, she described the circumstances that led up to the skit which Cohen's viewers will presumably be able to watch on his upcoming show, "Who Is America?"

"For my interview, my daughter and I were asked to travel across the country where Cohen (I presume) had heavily disguised himself as a disabled US Veteran, fake wheelchair and all," Palin wrote on Facebook. "Out of respect for what I was led to believe would be a thoughtful discussion with someone who had served in uniform, I sat through a long 'interview' full of Hollywoodism’s [sic] disrespect and sarcasm - but finally had enough and literally, physically removed my mic and walked out, much to Cohen’s chagrin. The disrespect of our US military and middle-class Americans via Cohen’s foreign commentaries under the guise of interview questions was perverse."

She then challenged "shallow Sacha boy" to air the footage, which she predicted would be "heavily edited, not pretty, and intended to humiliate." Additionally, she urged Cohen, CBS and Showtime to donate the proceeds from their program "to a charitable group that actually respects and supports American Vets."

She added: "Mock politicians and innocent public personalities all you want, if that lets you sleep at night, but HOW DARE YOU mock those who have fought and served our country. Truly sick."

Palin concluded her online rant by accusing Cohen and the production team of intentionally bringing her and her daughter to the incorrect airport in Washington, D.C. after the interview, causing them to miss their flight to Alaska. She also included a tweet by right-wing journalist Matt Drudge warning Republicans to be on the alert about Cohen going around and committing pranks.

"Sacha Baron Cohen at it again! This time for CBS/SHOWTIME. Lots of tricks played. Both Republicans and Democrats are getting caught up in the madness. Sacha has finked Cheney, Palin, Howard Dean, Alberto Gonzales, Bernie, Trent Lott, Patraeus, Ted Koppel, and more… BEWARE!" Drudge warned on Twitter.

It seems likely that the prank was done on behalf of "Who Is America?" a new Cohen project that will air on Showtime where the famous British comedian plays practical jokes on politicians and other influential Americans for satirical purposes, according to USA Today.

Palin has a reputation for not taking satire at her expense in stride. Although she put on a good-humored face when she was lampooned by "Saturday Night Live" comedian Tina Fey during the 2008 presidential election, she later told an oral history project, "I think SNL is egotistical if they believe that it was truly an effect on maybe the public debate about who should lead the country in the next four years," according to The Washington Post. She also explained that the reason she appeared on "Saturday Night Live" was that "I know that they portrayed me as an idiot, and I hated that, and I wanted to come on the show and counter some of that."

Her bitterness was also apparent in her remark that Fey owed Palin for the fact that her impersonation helped her comedy career.

"If I ran into Tina Fey again today, I would say: 'You need to at least pay for my kids' braces or something from all the money that you made off of pretending that you're me! My goodness, you capitalized on that! Can't you contribute a little bit? Jeez!'" Palin told the oral history project.

This isn't to say that Palin is the first person to be pranked by Cohen and subsequently express outrage about it. Indeed, the controversial comedian has frequently found himself on the receiving end of litigation.

Two fraternity brothers who were filmed making racist remarks in Cohen's movie "Borat" unsuccessfully attempted to get a court order removing the scene from the movie on the grounds that it tarnished their reputations and had been obtained after the filmmakers got them drunk and wrongly claimed the movie would never be shown in the United States, according to Reuters. Later, a charity worker who claimed she was injured during the filming of Cohen's movie "Bruno" filed a lawsuit, according to The Hollywood Reporter. That lawsuit was also ultimately unsuccessful, as was an effort by another person interviewed in that film — this one a Palestinian non-profit worker — who claimed he was wrongly labeled as a terrorist, according to The Guardian.

It remains to be seen whether Cohen's new series can replicate the pop culture phenomenon of his earlier works, including the movie "Borat" and his hit program "Da Ali G Show." Although Cohen has had other hit films since then, such as "Bruno" and "The Dictator," he has struggled to achieve the cultural relevance that he initially had after "Borat" became a sleeper hit that swept through America. Regardless of his status in the American pop culture pantheon, however, Cohen is well-known for movies that don't simply pull pranks but do so with a specific social agenda in mind. Works like "Borat" and "Bruno" made a point of exposing the ignorance and bigotry of both the high and low in American society, and it is likely that his series "Who Is America?" will strive to achieve the same result — with Palin's high-profile outrage only helping its cause.