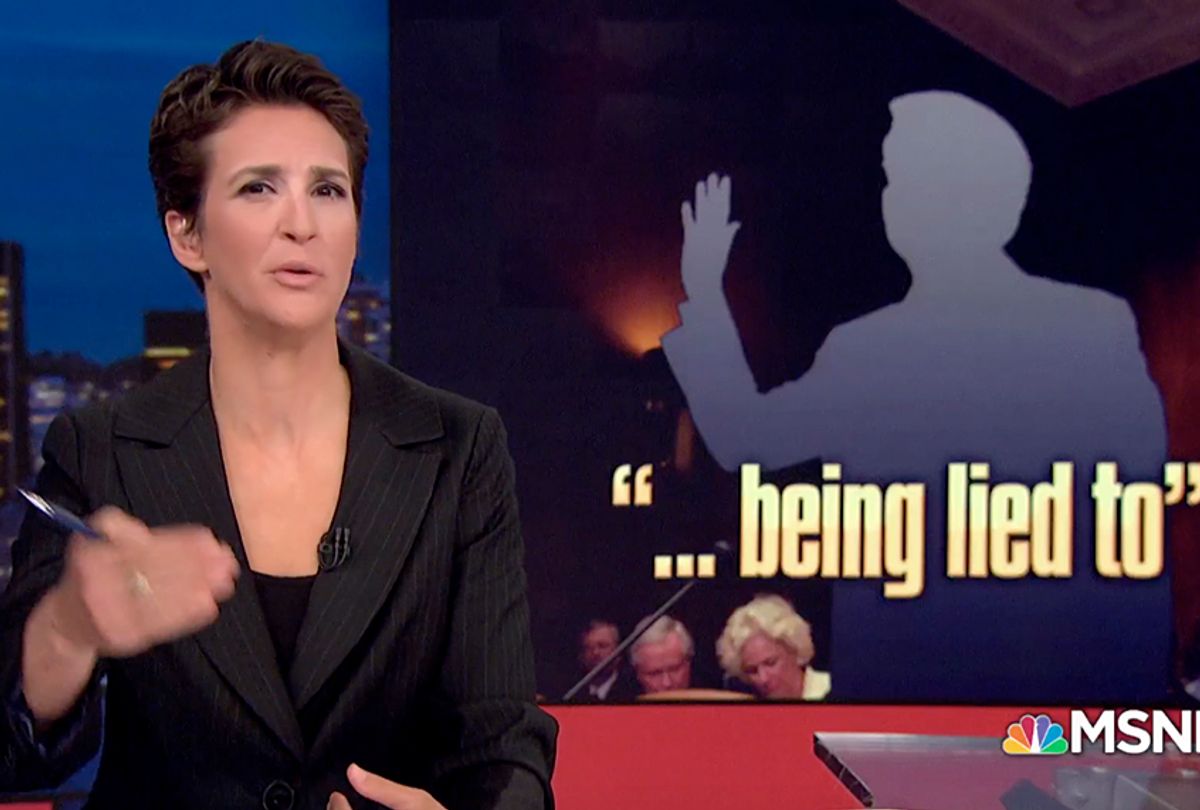 President Donald Trump announced his nominee to replace the retiring Justice Anthony Kennedy on the Supreme Court in a dramatic prime-time address — not unlike a reality TV show finale — from the White House on Monday evening. Brett Kavanaugh, Trump's second pick to fill a vacancy on the nation's highest court, is currently a judge on the U.S. Court of Appeals for the District of Columbia Circuit Court.

Senate Democrats have swiftly mobilized against Kavanaugh's appointment – drawing attention to his history of rolling back environmental protections, reproductive rights and racial equity.

On Tuesday night, MSNBC's Rachel Maddow called into question a different aspect of Kavanaugh's record: the truthfulness of some of his answers to senators during his testimony as an appellate court nominee — a matter likely to be revisited when he returns to Capitol Hill for his Supreme Court confirmation hearing.

"One of President [George W.] Bush's most controversial judicial appointees, Brett Kavanaugh, may have been less-than-forthright with Congress at a crucial hearing last year to confirm his appointment to a seat on the powerful federal appeals court in Washington, D.C.," Maddow read during her show.

The MSNBC primetime host was quoting the lede from a 2007 NPR report. Published one year after Kavanaugh's confirmation to the U.S. Court of Appeals, the article contained suggestions that Kavanaugh mislead senators – and the American public – during his last confirmation hearing.

At the time, Sen. Dick Durbin (D-IL) pressed Kavanaugh about William Haynes – a judicial nominee who had helped outline the Bush administration's use of so-called enhanced interrogation techniques. According to CNN, Democrats also questioned Kavanaugh about "what role he might have played in the administration's secret wiretapping program of Americans suspected of terrorist ties."

"What was your role in the original Haynes nomination and decision to renominate him?" Durbin asked at the time. "And, at the time of the nomination, what did you know about Mr. Haynes's role in crafting the administration's detention and interrogation policies?"

"Senator, I was not involved and am not involved in the questions about the rules governing detention of [enemy] combatants, and so I do not have any involvement with that," Kavanaugh answered.

During this appearance – his second before the Senate Judiciary Committee – Kavanaugh also denied involvement in the wiretapping controversy.

However, NPR's reporting seemed to contradict his testimony:

In fact, in 2002, Kavanaugh and a group of top White House lawyers discussed whether the Supreme Court would uphold the Bush administration's decision to deny lawyers to American enemy combatants. Kavanaugh advised the group that the Supreme Court's swing voter, Justice Anthony Kennedy, would probably reject the president's assertion that the men were not entitled to counsel. Kavanaugh had worked as a clerk for Kennedy. That meeting was first reported in The Washington Post. NPR independently confirmed the details with multiple sources.

It became "clear that Kavanaugh took part in at least one White House conversation about detainees," NPR concluded.

Durbin later told NPR he felt "perilously close to being lied to" during Kavanaugh's hearing.

"I will just say that he might have decided that he could split the difference here and give me an answer in the negative," Durbin told NPR in a phone interview in 2007. "But, he had to know he was misleading me, and the committee and the people who were following this controversial nomination."

Durbin added that he planned to write to Kavanaugh. His letter, in part, would read:

. . . Your sworn testimony appears inaccurate and misleading. You participated in a critical meeting in which the administration made a decision on whether to extend access to counsel to detainees, an issue that is clearly a "rule governing detention of combatants." By testifying under oath that you were not involved in this issue, it appears that you misled me, the Senate Judiciary Committee, and the nation.

"I have deep concerns about this nominee," Schumer said in 2006. "If there was a political fight that needed a political foot soldier in the last decade, Brett Kavanaugh was probably there."

On Tuesday, Maddow pondered if what happened in 2006 could repeat itself in 2018.

Earlier that day, Schumer, now the Senate minority leader, stood with his Democratic peers on the Senate Judiciary Committee in front of the Supreme Court.

“The ramifications of this battle will last a generation or more," he said. "I’m going to fight this nomination with everything I’ve got."