San Juan, Puerto Rico, beckons tourists back with its food scene, a blend of the island's many cultural influences 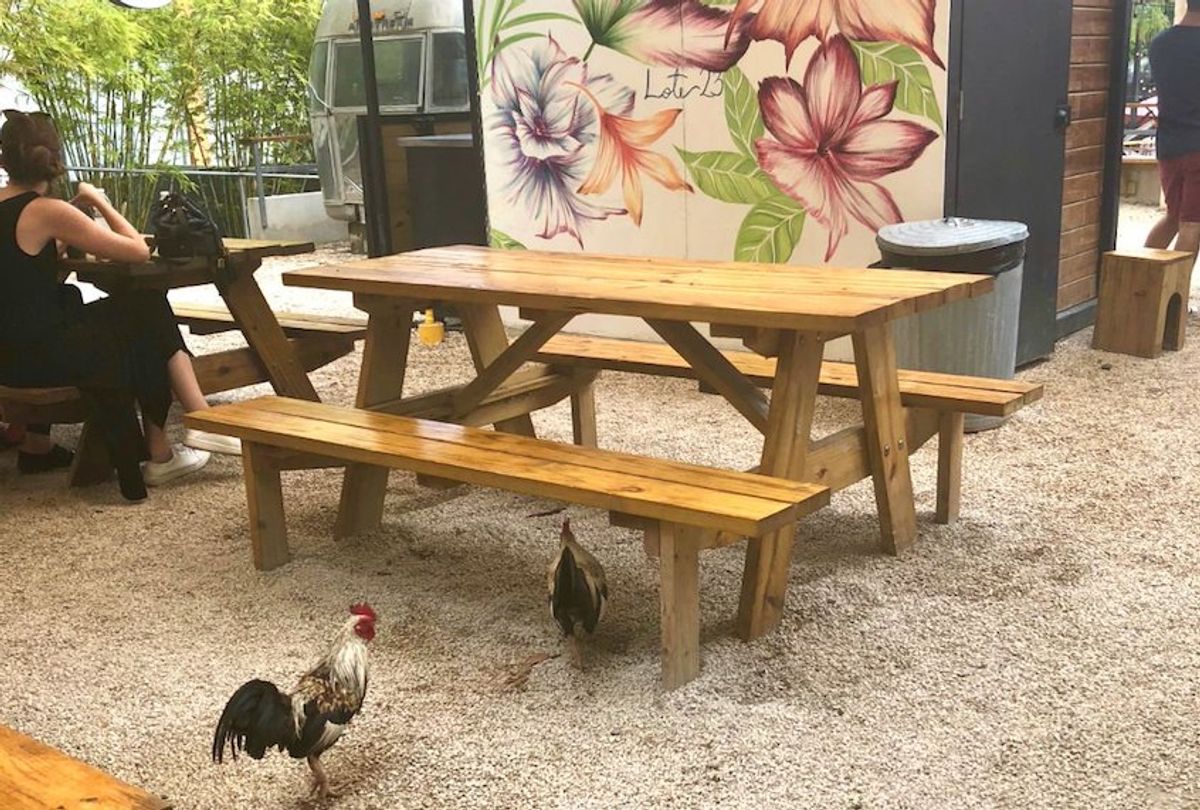 For a taste of local Puerto Rican fare, head to Lote 23. (Andrea Bartz/Fathom Away)
--

SAN JUAN, Puerto Rico — There is a particular expression people make when you tell them you are going to Puerto Rico — raised eyebrows and a bit of a grimace, as if they are bracing for the worst. The headlines pouring out of the island are still bad, the death toll is still an unknown, a huge chunk of the population still lacks power, and I'm with Senator Elizabeth Warren (and many others) in thinking the administration has left this U.S. territory in a lurch. But a friend who visited over the winter said something that stuck with me. "The people who own restaurants, bars, souvenir shops — they depend on tourism. They can't get back on their feet without people coming in and spending dollars." So when Marriott Americas invited me to spend a few days on the island, I went for it.

I appreciate beautiful sights, local music, languages, and the sweet smell of the ocean, but I really like to explore new places with my teeth and tongue. This worked out for me in San Juan, where there are more than 2,000 open restaurants and counting. The AC Hotel by Marriott San Juan Condado set me up with Spoon Food Tours in Old San Juan. 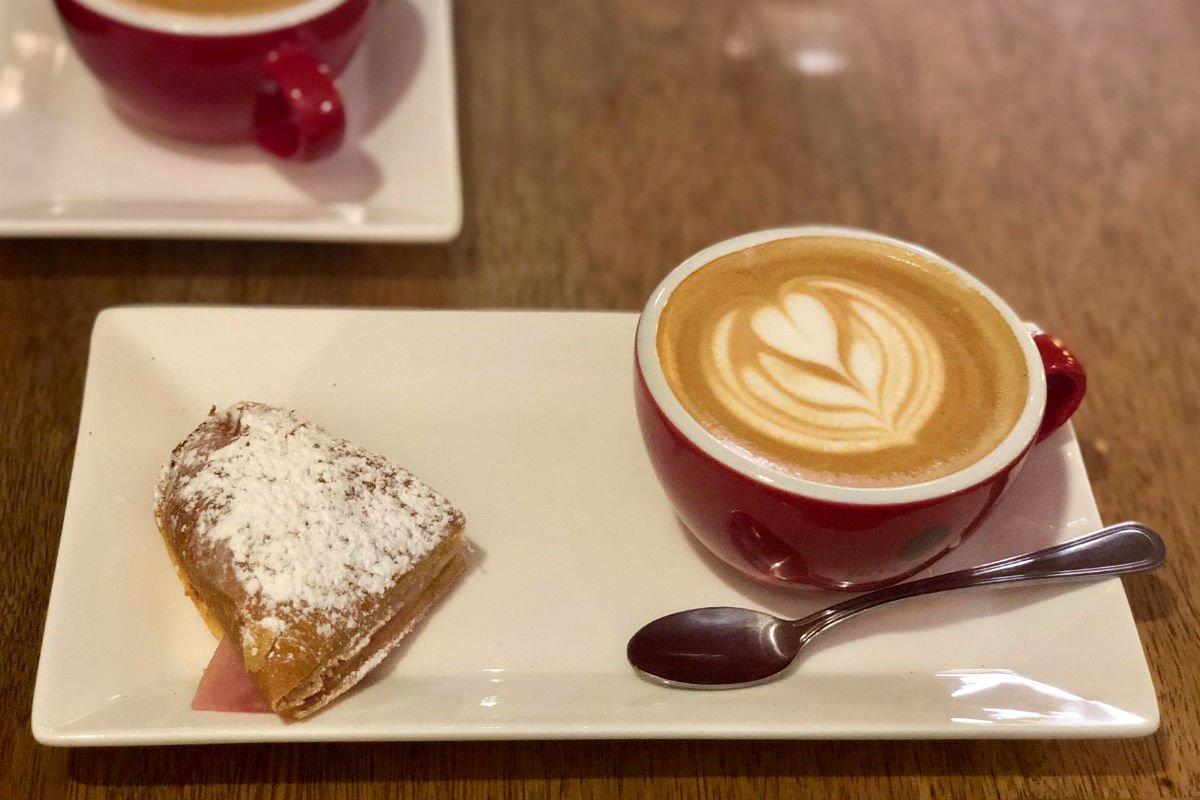 My guide, Daniela, explained that Puerto Rican food is a blend of the island's cultural influences from indigenous people, European conquistadors, and — once European diseases had wiped out most of the indigenous population the conquerors had enslaved — African people shipped in for free labor. Local cuisine is heavy on starches and protein, rather than fresh fruits and vegetables, because food spoiled quickly in the tropical climate. So perishable ingredients were turned into shelf-stable products, like sofrito, a paste made from garlic, onion, pepper, herbs, and oil, stored in a jar and added to many dishes. Local farms (and farmers markets) were becoming common before Hurricane Maria, but nowadays many ingredients are imported, as Puerto Rico's rural regions struggle to be sustainable. Still, Puerto Ricans love their food and are working hard to keep the quality up.

We began our tour with Puerto Rican coffee and mallorca sandwiches at Cafe Don Ruiz, a coffee shop that has been operating since 1962. These ham and cheese sammies are served on sweet, brioche-like bread dusted with powdered sugar. Mixing sweet and savory is common on the island.

Next up was Hecho en Casa for mofongo, a Puerto Rican favorite. Unriped plantains are mashed with seasonings and stock in a special mortar and pestle called a pilon. The dough is then shaped into a ring and deep fried, served with meat in the middle and sauce on top. (The nearby Dominican Republic has a similar dish, but they boil their plantains — suckers.) I tried a miniature serving with chicken and a garlic cream sauce, and the whole thing reminded me of buttery, delicious Thanksgiving stuffing.

Stuffed Avocado Shop is a cute, fast-casual cafe that lets you build your own "stuffed avocados" — I'm giving it air quotes because what you get is a delicious bowl with half an avocado and, around it, piles of greens, meat, fruits, veggies, and dressing. It's a very New York-like, build-your-own approach wherein you choose the base, protein, sauce, and toppings (from mango to corn to seaweed salad). By the time you finish reading this, some entrepreneur will have yanked the idea for a major U.S. metropolis. 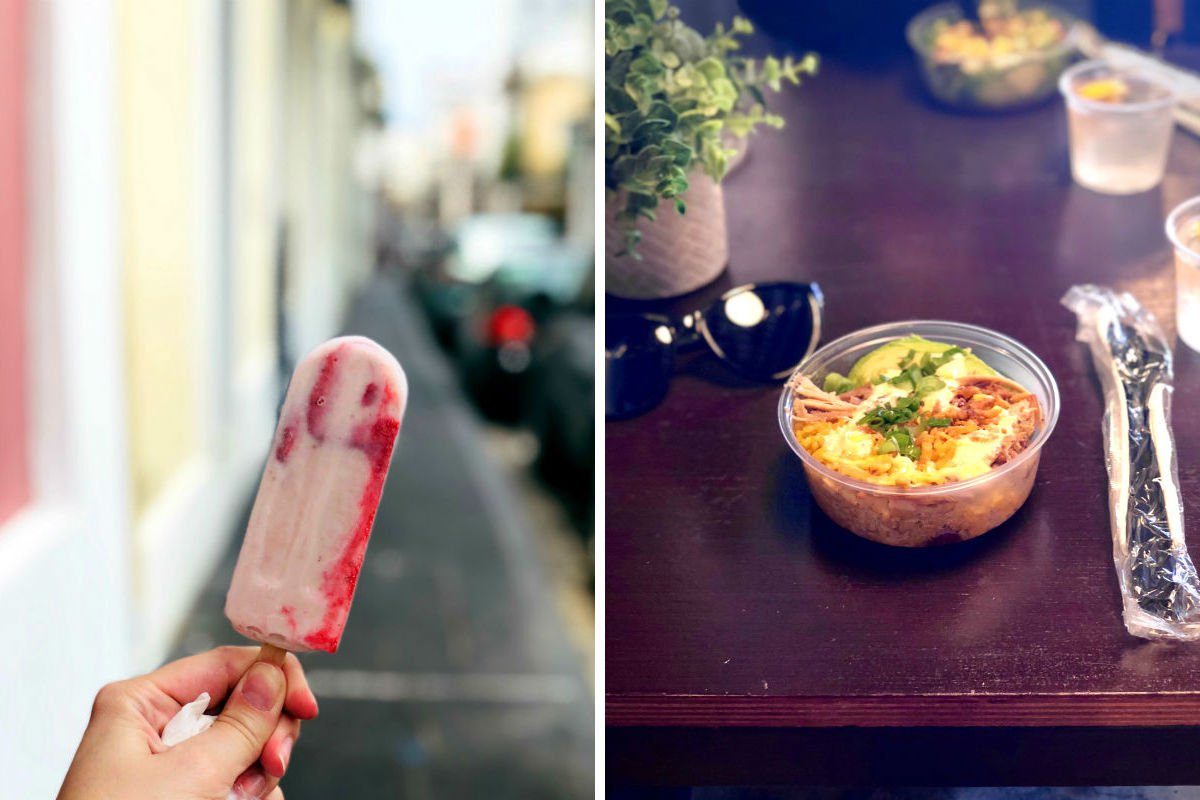 Nothing like an ice-cold popsicle on a hot Puerto Rican day. (Credit Andrea Bartz)[/caption]

Locals and tourists alike wander San Juan's candy-colored downtown cooling off with popsicles, so I was glad to stop into Señor Paleta, a local chain hawking homemade pops with and without dairy or added sugar. I slurped down a strawberry cheesecake popsicle in record time as the San Juan sun and humidity threatened to reroute the dessert into a rivulet down my arm. Truly, is there anything more vacation-y than standing in the street, eating a melting popsicle?

San Juan's foodie delights don't end with downtown San Juan. Over on Calle Loiza, a hipstery area with a few cool thrift stores and boutiques, Cafe Tresbe serves delicious empanadas out of a kitchen retrofitted from a shipping container. Lote 23, the local equivalent of New York City's Smorgasburg, brings together food vendors in one spot, with oversized Jenga and other games to keep people busy between nibbles. Finally, La Placita de Santurce (everyone just calls it La Placita) is a farmers market by day, blanketed in beds of jewel-colored produce and fresh seafood, with locals and residents picking up ingredients for dinner. At night, the area transforms into a street party, with people dancing, eating, and drinking. It's a cool reminder that, in spite of Hurricane Maria's devastation last fall, this is an island with a proud local heritage and a love of all things delicious — food, drinks, and moments.

How to Get There: All airports on Puerto Rico are fully operational, with around 70 flights per day across 27 different major commercial airlines. San Juan International airport (SJU) continues to have daily nonstop service from seventeen major airports on mainland U.S.A. Additional nonstop flights are operating from Canada, Germany, Panama, Colombia, Dominican Republic, and other islands in the Caribbean.

Where to Stay: For elegant rooms with chic rooftop pool, head to AC Hotel by Marriott San Juan Condado (rates start at $159 per night). For more of a resort vibe with ocean views, San Juan Marriott Resort Stellaris Casino(rates start at $249 per night) is half a block away.

Book Your Trip: Get in touch with the Fathom Travel Concierge and we can plan all the details of your trip for you.

The World's Best Chef Slums It
Beach Bumming in Rincon, Puerto Rico
Vieques from A to Z